Ever want to live like your favorite character from DOWNTON ABBEY? Well, now you can enjoy all of their favorite meals from THE UNOFFICIAL DOWNTON ABBEY COOKBOOK by Emily Baines!

While John D. Rockefeller had nothing to do with this dish, it was named for him because he d was the richest man at the time, and the chef, Jules Alciatore—who took the original recipe to his grave—wanted to convey the richness of the sauce. It is likely that the American Countess of Grantham would make sure that Mrs. Patmore had a reliable recipe for this beloved—and fancy—American appetizer, making it possible for the Countess to have a taste of home when needed.

2. Once oysters have cooled, break off and discard the top shell. Splash each oyster with a little bit of Pernod, saving ½ tablespoon for future use. Arrange oysters evenly on a baking sheet.

4. Melt butter in a large saucepan over medium heat. Stir in onion and garlic, and cook until onions are soft and translucent, about 5–7 minutes. Reduce heat to low and stir in spinach, followed by Monterey jack and fontina cheeses. Stirring frequently, cook until cheese melts. Add milk, followed by remaining 2 teaspoons sea salt and remaining 1 teaspoon pepper.

6. Bake oysters until bubbly and golden, about 12–15 minutes. Remove from oven and serve.

While this recipe uses spinach, it’s well known that authentic Oysters Rockefeller obtains its green sauce without the use of spinach, but rather from a mixture of parsley, celery, and green onions or chives. However, nobody knows the exact ratio of ingredients, and this fact, along with the likelihood that the original Oysters Rockefeller contained absinthe (which this recipe replaces with Pernod), a liquor that is illegal in several areas, makes duplicating real Oysters Rockefeller nearly impossible. This recipe, however, is an extremely satisfying solution.

For more recipes check out THE UNOFFICIAL DOWNTON ABBEY COOKBOOK!

Excerpted from The Unofficial Downton Abbey Cookbook by Emily Baines. Copyright © 2019 by author. Used by permission of the publisher. All rights reserved. 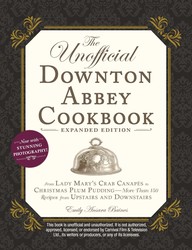 Perfect for fans of the show and just in time for the release of the movie, The Unofficial Downton Abbey Cookbook gives you the opportunity to experience Mrs. Patmore’s cooking for yourself by dining like the Earl and Countess of Grantham or seeing what food was like for the maids and butlers in the servant’s quarters. With all the recipes, photographs, and dashes of historical insight, this cookbook is essential to any Downton fan’s collection.