Joy Peterkin lost her home in Hurricane Katrina, but she still had her Chihuahua, Little Bit. Just as Joy was finding some normalcy in her life, Little Bit persistently nudged a spot on her breast. It turned out that Little Bit knew something important that Joy didn’t. From The Divinity of Dogs: True Stories of Miracles Inspired by Man’s Best Friend.

The first week of October 2004, my husband, Salem, and I were coming out of the doctor’s office at the local mall when a young woman, holding a basket, approached us. She asked if we ‘d be interested in buying a puppy. We hesitated. We had lost our dearly loved Shih Tzu a year and a half before and had decided not to get another dog.

We are both animal lovers and couldn’t resist looking at the puppies in the basket. The woman explained that she was in dire straits. She said her husband had been hurt in an accident, and they didn’t have any money. The only thing she had were the puppies.

When we looked into the basket, there were three tiny puppies crawling around. One was much smaller than the other two, and I picked her up. She fit in the palm of my hand. When I put her up to my neck, she snuggled right in. she had my heart at that moment. We purchased her for twenty-five dollars.

The next day, I took her to the veterinarian, who confirmed that she was most likely a Chihuahua and that she was about four weeks old.

We didn’t know what to name her. One day, I looked into the box she was kept in and said, “Well, aren’t you a little bit of a thing?”

“You just named her,” Salem said.

So, Little Bit she became. At the time, she weighed a tiny eight ounces. We came to love her very much.

Eleven months after Little Bit came into our lives, we lost our home and all of our possessions in Hurricane Katrina. Little Bit helped us keep our sanity.

Four months later, we moved out of our Federal Emergency Management Agency trailer and relocated to another state. We were just settling into our new life when Little Bit started behaving strangely. She would get up in my lap and nose my right breast. Before this, she had always snuggled up inside my robe in the morning while I drank coffee and read the paper. Now she didn’t cuddle, she just nosed my breast. I started to notice that it hurt when she bumped me. I felt around but didn’t find anything.

After two weeks of little bit nosing my breast, I decided to see the doctor. I asked for a mammogram and told him about my dog’s behavior. I was scheduled for the mammogram, and sure enough, they found a spot on my right breast that didn’t look right. A biopsy proved it was cancer. It turned out to be so small that even the surgeon couldn’t feel it. I was told it was the size of a small pea and was located under my nipple.

I was operated on three weeks later. The lumpectomy went well, and there were no surprises.

If God had not been watching over me and sent me that little puppy, I would probably have been in much worse shape by the time the lump was found. As it was, I only had to endure seven weeks of radiation. I have now been cancer-free for three and a half years.

Little Bit has never nosed my breast since I had the cancer removed. I guess the truth is that I saved her and she saved me. 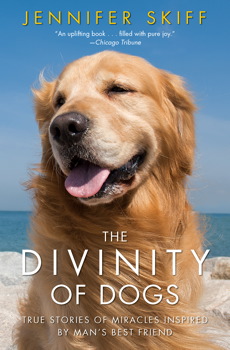 The Divinity of Dogs: True Stories of Miracles Inspired by Man’s Best Friend
by Jennifer Skiff

The Divinity of Dogs is about the moments we learn something profound about life from an experience with a dog. In this inspiring collection of true dog stories, you’ll hear dramatic firsthand accounts from people whose lives have been transformed by a dog’s love. From everyday blessings to lifealtering miracles, these stories confirm what many of us have always known: dogs are the ultimate gift, sent here to help us on our journey.

You’ll meet Mazie, the Lab who was rescued from a shelter only to return the favor by rescuing her new family; Luna, the Retriever who pulled her person to safety after she collapsed in a field; Little Bit, the Chihuahua who detected cancer in her owner’s breast; Emma, the Rottweiler who stopped a troubled man from taking his life; Bo, the Boxer who helped comfort a mother after the loss of her son; and other amazing, heroic dogs you’ll never forget.

Filled with heartwarming anecdotes, adorable dog photos, and the author’s moving personal story, The Divinity of Dogs reminds us that we’re not alone and will always have joy in our lives as long as we have dogs by our sides.