During a cross-country RV trip, I visited Stray Rescue headquarters in St. Louis and its 50-year-old founder, Randy Grim. Randy, author of Don’t Dump the Dog, is foul-mouthed, germaphobic, and socially anxious. It probably takes a man with issues to drive unarmed around the most dangerous city in America, rescuing dogs and trying to convince gang-bangers to treat animals with something approximating respect, and Randy told me it was no surprise he ended up rescuing dogs for a living. From Travels With Casey: My Journey Through Our Dog-Crazy Country.

As a kid, he’d lived under the tyranny of an abusive father—the only time his family got along was when Randy brought a stray dog home.

“I’m probably trying to fix my childhood with every dog I rescue,” he said. “All my self-worth comes from dogs. Always has. These stray and feral dogs are my kids. They’re what I live for. I think I’ll probably be single forever, because all I really care about are these dogs.”

Randy lives with eight rescues in his modest St. Louis home. “The few dogs that truly can’t really be rehabilitated come to live with me,” he told me. Randy is on the perpetual prowl for more foster and adoptive homes for the dogs he rescues, and he joked that he should start a website called StrayHarmony.com.

“It would be a site for lonely people to find the lonely stray dog of their dreams,” he explained. “People could check a box that says ‘I hate men,’ and if the dog also hated men, we’d match them up. It’s the perfect way to connect the freaks of the world with the freaky dogs of the world.”

At a red light, an especially sad-looking shepherd mix shuffled across the pavement in front of us. “I haven’t seen that dog before,” Randy said. He jumped out of the car, kneeled down in the street next to an uncovered manhole, and fed the dog hot dogs while a car behind us honked.

The dog seemed desperate for this unexpected human kindness, even following Randy back to the Jeep. “Oh, honey, I can’t take you with me today,” he said. “I’ve got a full car already.”

The dog got the picture, continuing on to wherever it was headed. We pulled away, and as Randy barreled down a highway toward Stray Rescue headquarters, I told him about nineteenth-century French writer Charles Baudelaire.

“You would have liked him,” I said. “He loved street dogs and wrote the most beautiful poem about them.”

I shuffled through my notebook, looking for where I’d noted Baudelaire’s words. “Can I read the passage to you?”

I cleared my throat: “I sing the mangy dog, the pitiful, the homeless dog, the roving dog, the circus dog. . . . I sing the luckless dog who wanders alone through the winding ravines of huge cities, or the one who blinks up at some poor outcast of society with its soulful eyes, as much as to say, ‘Take me with you, and out of our joint misery we will make a kind of happiness.'”

Randy didn’t say anything at first. Then he wept.

More from Benoit Denizet-Lewis: Should Bulldog Breeding Be Banned? 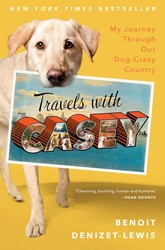 Travels With Casey: My Journey Through Our Dog-Crazed Country
by Benoit Denizet-Lewis

A moody Labrador and his insecure human take a funny, touching cross-country RV trip into the heart of America’s relationship with dogs. Over the next four months, thirty-two states, and 13,000 miles in a rented motor home, Denizet-Lewis and his canine companion, Casey, attempt to pay tribute to the most powerful interspecies bond there is, in the country with the highest rate of dog ownership in the world.