Cat advocates are currently trying to reform animal shelters in the U.S. in order to prevent euthanasia. Currently, millions of homeless felines are executed every year. Trap, Neuter, and Release is one way to ensure that homeless cats stop reproducing, and are allowed to live humanely. Read more about it in The Lion in the Living Room: How House Cats Tamed Us and Took Over the World.

The cat advocates’ central goal is to reform the US animal shelter system and stop feline euthanasia. Cats are by now proving such resourceful survivors that we routinely execute them. Our country kills millions of healthy but homeless cats every year—nearly half of all house cats that enter shelters, and almost 100 percent of the unsocialized cats, which are especially hard to place with owners.

The better solution, according to the cat lobby? Just leave the cats outside—but stop them from reproducing in such staggering numbers. Though conference speakers counsel against the public use of acronyms, among themselves they call the strategy TNR: Trap, Neuter and Release, or—as many prefer—Return. Roaming cats, which the advocates sometimes call “community cats” or “wild cats,” are captured in traps, sexually defused (and ear-tipped to prove it), and then set free to live out their lives where they “belong”—“as part of the natural landscape.”

The neuter-and-release method is sweeping the country and has been embraced in recent years by many major municipalities: joining Washington are New York City, Chicago, Philadelphia, Dallas, Pittsburgh, Baltimore, San Francisco, Milwaukee, Salt Lake City, and more. There are now some 250 pro-TNR ordinances nationwide, a number that, according to Alley Cat Allies, rose tenfold from 2003 to 2013, and some 600 registered nonprofits have emerged to do the work officially, though there are far more groups trapping, neutering, and returning under the radar. Abroad, entire countries—like Italy—have adopted the strategy. 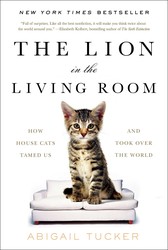 Lion in the Living Room
by Abigail Tucker

A lively adventure through history, natural science, and pop culture in search of how cats conquered the world, the Internet, and our hearts. House cats rule back alleys, deserted Antarctic islands, and our bedrooms. But how did cats accomplish global domination? Unlike dogs, they offer humans no practical benefit. The truth is they are sadly incompetent rat-catchers and pose a threat to many ecosystems. Yet, we love them still. To better understand these furry strangers in our midst, Abby Tucker travels to meet the breeders, activists, and scientists who’ve dedicated their lives to cats.