More than 200,000 gray wolves once lived throughout the United States. Aggressive killing campaigns led to their eradication in the lower 48 states by the 1930s. Then, in 1974, wolves were among the first animals to receive protection under the Endangered Species Act. In 1995 and 1996 they were reintroduced to Yellowstone National Park and Central Idaho. Since then, wolf populations have prospered and the wolf is on its way to being one of the greatest wildlife recovery success stories. But wolves are at risk once again.

In 2011, wolves began to lose Endangered Species Act protection. Since then, the war on wolves has escalated. In Idaho, Governor “Butch” Otter has a stated a goal of reducing the state’s population to 150 wolves. Before stopped by public outcry, Idaho’s Department of Fish and Game tried to reduce wolf populations in the Frank Church River of No Return Wilderness by 60 percent so that sport hunters could have more elk to shoot. Wyoming’s “kill-on-sight” management plans were so destructive that Wyoming’s wolves were recently relisted as endangered. Every time wolves gain ground, the killing begins again.

And yet wolves have been key to our own development and success as a species since they began co-evolving with us long before we lived apart from the wilderness.

Co-evolution is when two or more species mutually affect one another’s evolution. Every dog living today evolved from wolves, and there is no doubt that dogs have influenced our lives over the past 12,000-14,000 years. But did you know that dogs and their wolf ancestors may have played a major role in making us the dominant species on the planet long before then? There is evidence that suggests that wolves have been influencing humans for as long as 150,000 years. There’s no way to know for sure what was going on thousands of years ago, but here are some intriguing ways canines may have made us what we are today.

Hunted with us. By hunting with early humans, wolves may have helped us hunt more effectively. This would have allowed us to grow our populations more quickly and may even, through increased protein in our diets, have contributed to the changes in our brains that set ups apart from other hominids. Their help may also have freed us to spend time on other things such as developing new tools, forming complex societies, and planting crops.

Taught us better ways to hunt. Native Americans studied wolf behavior to make themselves more efficient hunters. It’s likely that our hunter-gatherer ancestors did the same, and that wolves helped humans become dominant hunters, an important step on our path to where we are today. And, again, more time for tool-making, planting crops, learning, and building.

Guarded our homes. With wolves guarding their villages and camps, our ancestors could better protect themselves against predators and other humans, allowing populations to grow and attention to be put toward many of the things that made us what we are today. It also may have allowed us to grow small villages into larger ones, which led to more complex societies.

Cleaned up after us. Wolves and early dogs most likely ate a lot of garbage that may have piled up around early villages. Garbage disposal may have cut down on disease, increasing our survival rates, and allowing for village growth and expansion.

Started us on our domestication journey. Although the exact date of the domestication of the wolf is not known, it was long before any other animal was domesticated. It’s also very likely that the choice was as much the wolves’ as it was ours. After canis lupus familiaris became part of our lives, we tried to domesticate everything we could. We used the strength of other animals to help us begin farming, to travel long distances, to build bigger and stronger structures and towns, and to otherwise begin to form the complex societies we have today.

If you’d like to help these remarkable animals, the following are a few of the terrific organizations that fight for wolves:
Defenders of Wildlife
EarthJustice
Center for Biological Diversity
National Resources Defense Council
To find more, including wolf organizations near you, see the wolf links on my website. 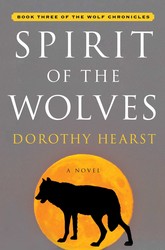 Spirit of the Wolves
by Dorothy Hearst

The third and final title in The Wolf Chronicles: Kaala the young wolf fulfills her destiny—to either help humans and wolves to live in peace, or bring war that will destroy them all.Fourteen thousand years ago in southern Europe, a wolf cub named Kaala discovers that she alone can link wolves and humans, thus keeping humans from growing distant from and destroying the world around them. In Promise of the Wolves and Secrets of the Wolves, Kaala came to understand her role. Born of a forbidden, mixed blood litter, and alone after her mother’s exile, Kaala struggled to earn her place in the Swift River pack. In this satisfying conclusion to The Wolf Chronicles, Kaala will have to fight and sacrifice in ways she never imagined, and she must decide how far she is willing to go for peace…when every step she takes leads wolfkind and humankind toward war.