One thing I said “no” to a lot when my kids were little? Too much TV. Hey, I know I make my living from TV, but in general I didn’t like them watching it all the time. From Big Daddy’s Rules: Raising Daughters is Tougher Than I Look.

When Bria was small, Rugrats was a big show. But one of the main characters, Angelica, was really mean and nasty. So what does Bria do? She starts imitating Angelica. Trying to act mean and nasty. Like I don’t have enough troubles in my life, I need a TV show to teach my kid how to act like a snotty bitch. So we cut that off.

But we let them watch some TV. You gotta. You can’t cut them off from the world altogether. She liked Barney a lot. I know it’s cool to make fun of Barney, but you know what? It was sweet, and she loved it, and so I got no problem with that.

I’ll tell you what I do have a problem with. Video games. We never let our kids get anywhere near them. Because I think they make you brain-dead. I know these adults who play them constantly; I know every NBA player supposedly plays video games. I don’t care. I think they’re asinine. I know there’s all kinds, but the violent ones are the worst. Like Grand Theft Auto. I find it absolutely horrible.

But even if they’re not horrible, they’re mesmerizing, and they make kids not want to get out of the house. That’s one thing my mother had right on the nose—Saturday morning. Come on! Get up! Let’s go! Out of the house! We’d go to a movie, or go bowling, or whatever. But these kids with the video games—they sit there for hours. You look at them, they have the face you see in zombie movies. I think they have the cast in the zombie movies play video games before the camera rolls, just to get in character. And the parents don’t give a fuck because it’s what the parents want— “As long as the kid is quiet and out of my hair, I don’t care what they’re doing.” And that continues through life: If the parent says, “As long as they’re not causing me a problem, that’s fine,” then you get into that mentality.

And then you really have a problem.

Look, I know we’re all busy. You’re working, your wife is working, you have no time for yourself. I get it. But just shove a kid in the corner with a video game—that’s not a solution. That’s a recipe for disaster. Next thing you know, the kid is out playing Grand Theft Auto, only it isn’t a game. And there’s no reset button on life. 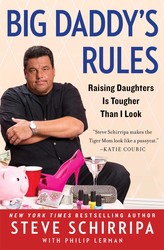 Steve Schirripa is known for his star turns on The Sopranos and The Secret Life of the American Teenager, but in his own life he’s the father of two daughters of his own—and a self-confessed human volcano. In Big Daddy’s Rules, Schirripa tells all and brings a welcome dose of old-school advice (and new-school humor) to the parenting wars.