Ah, can there be sweeter music to a father’s ear than to hear these words? “Gee, Dad, I always thought you were completely nuts. But now I get it!” Or something to that effect, anyway?

My daughter Kate—whom I named after my friend Kate Hepburn—grew up watching her dad spend endless hours every day locked in his paper-strewn office, interviewing people over the phone, plowing through tons of research, talking to my agent and editors, and cursing at the various devices (computers, faxes, copiers, monitors, tape recorders, printers) that are both the lifeblood and bane of every writer’s existence. There were also meetings with sources, of course, and trips to libraries and the various locales I was writing about. But an ungodly amount of time was also spent living like a hermit, hunched over a keyboard, doing the thing I’ve been doing for a half-century now.

Not that we didn’t have fun along the way. Even before I started writing books full-time, when Kate was just three years old and I was senior editor of PEOPLE magazine, her mom and I would take Kate (and her mom, of course) along on business trips—like the time I interviewed the great actor Laurence Olivier in London and he knelt down to shake Kate’s hand. “You’re going to break hearts someday,” he told her, and then asked where he might go to “weewee.” The memory of my daughter leading the great Lord Olivier down the hall toward the bathroom is one I won’t soon forget.

As she grew older, sometimes Kate would tag along when I went on research trips: to London several times, interviewing sources for my books on Mick Jagger, Diana, and William and Kate, among others; to Hawaii to interview the author James Michener; to Chicago to interview Oprah; to L.A. to appear on TV shows promoting my books on Madonna, the Kennedys, Michael Jackson, the Clintons, Barbra Streisand, George and Laura Bush.

Is it wise to want your child to follow in your footsteps? Probably not. My father was a career Navy aviator who flew dive bombers off aircraft carriers in the Pacific during World War II. He was a derring-do test pilot, in fact. But at no time did I ever remotely consider taking to the skies, friendly or otherwise. Nor did he make any effort to interest me in flying, or a career in the military. Like most wise parents, he wanted me to chart my own course in life, free from any undue influence or sense of obligation.

So naturally, when I became a father I threw that modern, sensitive-to-the-child’s feelings approach to parenting right out the window. By the time she entered high school, I was convinced Kate had the right stuff to be a journalist—and just as convinced that she would be as besotted with the profession as I am.

When other 15-year-olds got part-time sales jobs for the summer, I urged Kate to go to work writing feature pieces for our local paper in Connecticut. After all, I was 16 when I went to work as a cub reporter for the Livermore, Calif. Herald & News—a job that three years later led me to writing stories for The New York Times and, straight out of U.C. Berkeley, a spot as a New York-based staff writer at TIME magazine before I was 21.

To say that Kate took that advice and ran with it is an understatement of monumental proportions. After earning her master’s degree at Oxford University, she went to work at CBS, and then Fox News before becoming White House correspondent for Bloomberg News.

When she had her first child and pondered whether she would return to work, it was time for me to butt in again. After 20 years as a magazine editor, I had quit my job to write books full-time, and it was the best decision I ever made. The independence, the sense of freedom that comes with being your own boss, and of course the joy of the writing itself—it’s hard to imagine that any other job could be more gratifying.

This spring, we found ourselves both riding high on the bestseller lists—Kate Andersen Brower with her second book, First Women, and me with my 34th book, Game of Crowns. It was my l8th time on the New York Times hardcover bestseller list, but the first time I was on there with another Andersen—albeit an Andersen Brower. In fact, at one point we held five spots on the Times‘ various lists. (We’ve also each written No.1 nonfiction New York Times bestsellers in the past—apparently the first father-daughter duo to do so.)

Proud of Kate? Of course, indescribably so. Competitive? You bet. Like actors, writers are not by nature generous. If we’re being entirely honest, most of us adhere to the Gore Vidal line that “Nothing makes one feel quite so warm inside as watching a good friend fail.” As much as Kate and I want each other to succeed—wildly—we probably would each prefer to be top of the heap, as Ol’ Blue Eyes would say. It’s up to Valerie, Kate’s mom and my preternaturally patient and understanding wife of 44 years, to hold this writer’s self-confessed penchant for narcissistic pettiness in check. I’ve also convinced myself that as Kate’s dad I can take full credit for her success, but it doesn’t really work the other way around. Which means, of course, I’ve still got some work to do on that petty streak.

Kate’s phenomenal writing achievements aside, I am equally in awe of her ability to juggle a demanding career with the equally crazy business of raising two rambunctious toddlers. While Graham, three, and two-year-old Charlotte careen around with the family’s Wheaton Terrier Chance in hot pursuit, Kate manages to calmly interview first ladies, banter with D.C. press corps colleagues, and juggle play dates over the phone.

Being a parent comes naturally to Kate, and so does being a writer—thanks to her upbringing. She already knows how frustrating it is to pursue sources for months or even years, to struggle to meet deadlines, to battle those infamous, crazy-making writer’s blocks, and to sweat out every arduous step of the publishing process. All this can and does produce anxiety—and that can lead to lots of complaining and some, shall we say, colorful turns of phrase.

So Kate gets why her dad holed up in his office like a troll, chasing down sources, poring over his notes, and screaming at his printer—only to emerge every year or so, blinking into the sunlight and hoping that readers will love (or more to the point, buy) his latest offering. We’ve always been close, but the shared experience of churning out a book every year or so has added an entirely new dimension to our relationship. Now we’re exchanging emails about book contracts, trading phone numbers for contacts and sources, bemoaning how little time we have to actually get the job done, bitching about the competition—oh, and Facetiming about the grandkids, of course.

As for the writing itself, it’s Mom, not Dad, who gets a first look at Kate’s first draft for comments and corrections. Remembering that I used to be a magazine editor, Kate fears I might be a tad too heavy-handed in my criticism. In truth, I’m in total awe of what a polished writer she has become.

Is it acceptable to push your child in a direction you know in your gut is right for her? No, but including her in your working life from the very beginning—and offering a little friendly career advice along the way—hey, it couldn’t hurt. 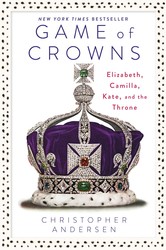 Game of Crowns
by Christopher Andersen

The #1 New York Times bestselling author of William and Kate and The Day Diana Died takes a compulsively readable look into the relationships and rivalries of Queen Elizabeth, Camilla Parker Bowles, and Kate Middleton.One has been famous longer than anyone on the planet—a wily stateswoman and an enduring symbol of a fading institution. One is the great-granddaughter of a king’s mistress and a celebrated homewrecker who survived a firestorm of scorn to marry her lover and replace her arch rival, a beloved twentieth-century figure. One is a beautiful commoner, the university-educated daughter of a self-made entrepreneur, a fashion idol, and wife and mother to two future kings. Master biographer Christopher Andersen takes readers behind palace walls to examine the surprising similarities and stark differences among three remarkable women—Queen Elizabeth; Camilla, Duchess of Cornwall; and Princess Kate. Andersen reveals what transpires within the royal family away from the public's prying eyes; how the women actually feel about each other; how they differ as lovers, wives, and mothers; and how they are reshaping the landscape of the monarchy in this addictive read that will shock even those who are spellbound by the royal palace.