School can be cruel. What advice would you give your kids? Here’s an open letter to my son, Chase, on being kind. It’s more than not teasing other children; it’s about inviting the left-out kid to play, or standing up to the bully who’s teasing someone else. From Carry On, Warrior.

Dear Chase,
Whoever you are, whoever you become, you are loved. You are a miracle. You are our dream come true.

Chase, here is what would happen in our home if one day you were to tell your father and me that you are gay.

Our eyes would open wide.

Then we would grab you and hold you tighter than you would be able to bear. And while we were holding you, we would say a silent prayer that as little time as possible passed between the moment you knew you were gay and the moment you told us. And we would love you and ask you one million questions, and then we would love you some more and finally, I would rush out to buy some rainbow T-shirts, honey, because you know Mama likes to have an appropriate outfit for every occasion.

And I don’t mean, Chase, that we would be tolerant of you and your sexuality. If our goal is to be tolerant of people who are different than we are, Chase, then we really are aiming quite low. Traffic jams are to be tolerated. People are to be celebrated. Every person is Divine. And so there would be celebrating. Celebrating that you had stepped closer to matching your outsides with your insides—to being who you are. And there would be a teeny part of my heart that would leap at the realization that I would forever be the most important woman in your life. Then we would tell everyone. We would not concern ourselves too much with their reactions. There will always be party poopers, baby.

Honey, we’ve worried that since we are Christians, and since we love the Bible so much, there might come a day when you feel unclear about our feelings about this, since there are parts in the Bible that appear to discuss homosexuality as a sin. Let us be clear about how we feel, because we have spent years of research and prayer and discussion deciding.

Chase, we don’t believe that homosexuality is a sin. The Bible was inspired by God, but it was written, translated, and interpreted by imperfect people just like us. This means that the passing of this sacred scripture from generation to generation and from culture to culture has been a bit like the “telephone game” you play at school. After thousands of years, it’s impossible to judge the original spirit of some scripture. We believe that when in doubt, mercy triumphs judgment. So your parents are Christians who study and pray and then carefully choose what we follow in the Bible, based on whether or not it matches our understanding of Jesus’s overall message. Certainly we make mistakes. Everyone does. But it’s our duty to try. We must each work out our own faith with fear and trembling. It’s the most important thing we’ll ever do. Even so, some folks will tell you that our approach to Christianity is scandalous and blasphemous. But honey, the only thing that’s scandalous about this approach is admitting it out loud. The truth is that every Christian is a Christian who chooses what he follows in the Bible.

Recently there was some talk in my Bible study about homosexuality being sinful. I quoted Mother Teresa and said, “When we judge people we have no time to love them.” I was immediately reprimanded for my blasphemy by a woman who reminded me of 1 Corinthians 6:9–10. But I was confused because this woman was speaking. In church. And she was also wearing a necklace. And I could see her hair, baby. She had no head covering. All of which are sooooo totally against the New Testament Bible Rules. And so I assumed that she had decided not to follow the parts of the Bible that limited her particular freedoms, but to hold fast to the parts that limit the freedoms of others. I didn’t point this out at the time, because she wasn’t a bad person. People are doing the best they can, mostly. It’s best not to embarrass anyone.

Much of the Bible is confusing, but the most important parts aren’t. Sometimes I wonder if folks keep arguing about the confusing parts so they don’t have to get started doing the simple parts. So a long time ago, your father and I decided that if a certain scripture turns our judgment outward instead of inward, if it requires us to worry about changing others instead of ourselves, if it doesn’t help us become better lovers of God and life and others, if it distracts us from what we are supposed to be doing down here—finding God in everyone, feeding hungry people, comforting the sick and the sad, giving whatever we have to give, and laying down our lives for our friends—then we assume we don’t understand it yet, and we get back to what we do understand. Chase, what we do understand is that we are reborn. And here is what I believe it means to be reborn:

The first time you’re born, you identify the people in the room as your family. The second time you’re born, you identify the whole world as your family. Christianity is not about joining a particular club; it’s about waking up to the fact that we are all in the same club. Every last one of us. So avoid discussions about who’s in and who’s out at all costs. Everybody’s in, baby. That’s what makes it beautiful. And hard. If working out your faith is not beautiful and hard, find a new one to work out. And if spiritual teachers are encouraging you to fear anyone, watch them closely, honey. Raise your eyebrow and then your hand. Because the phrase repeated most often in that Bible they quote is Do Not Be Afraid. So when they tell you that gay people are a threat to marriage, honey, think hard.

I can only speak from my personal experience, but I’ve been married for ten years and barely any gay people have tried to break up my marriage. I say barely any because that Nate Berkus is a little shady. I am defenseless against his cuteness and eye for accessories. He is always convincing me to buy beautiful trinkets with our grocery money, and this drives your sweet father a bit nuts. So you might want to keep your eye on Berkus. But with the exception of him, I’m fairly certain that the only threats to your father’s and my marriage are our pride, insecurity, anger, and wanderlust. Do not be afraid of people who seem different from you, baby. Different always turns out to be an illusion. Look hard.

Chase, God gave you the Bible, and he also gave you your heart and your mind, and I believe he’d like you to use all three. It’s a good system of checks and balances he designed. Prioritizing can still be hard, though. Jesus predicted that. So he gave us this story: A man approached Jesus and said that he was very confused by all of God’s laws and directions and asked Jesus to break it down for him. He asked, “What are the most important laws?” And Jesus said, “Love God with all your heart, mind and soul, and love others as yourself.” He added that every other scripture hangs on this one. So use that ultimate command as a lens to examine all other scripture. And make damn sure that you are offering others the same rights and respect that you expect for yourself. If you do that, you can’t go wrong.

Chase, you are okay. You are a child of God. As is everyone else. There is nothing that you have done or will do that will make God love you any more or any less. Nothing that you already are or will become is a surprise to God. Tomorrow has already been approved.

And so, baby, your father and I have only one expectation of you. And that is that you celebrate others the way we celebrate you. That you remember, every day, every minute, that there is no one on God’s Green Earth who deserves more or less respect than you do, My Love.

“He has shown you what is good. And what does the Lord require of you? To act justly and to love mercy and to walk humbly with your God.”—Mica 6:8 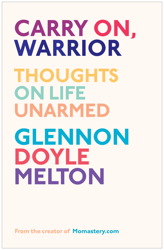 For years Glennon Doyle Melton built a wall between herself and others, hiding inside a bunker of secrets and shame. But one day everything changed: Glennon woke up to life, committing herself to living out loud and giving language to our universal (yet often secret) experiences. She became a sensation when her personal essays started going viral. Her hilarious and poignant observations have been read by millions, shared among friends, discussed at water coolers, and have now inspired a social movement. In Carry On, Warrior, Melton shares new stories and the best-loved material from Momastery.com. Her mistakes and triumphs demonstrate that love wins and that together we can do hard things. Melton is a courageous truth-teller and hopespreader, a wise and witty friend who emboldens us to believe in ourselves and reminds us that the journey is the reward. Carry On, Warrior proves that by shedding our weapons and armor, we can stop hiding, competing, and striving for the mirage of perfection, to build better lives in our hearts, homes, and communities.