Finland is an education superpower whose students outperform those in the U.S. and dozens of other countries. But it wasn’t always that way. Here’s the secret to their incredibly successful education reform-it starts with their teachers, says Amanda Ripley in her book The Smartest Kids in the World.

Finland, it turns out, had its own No Child Left Behind moment, one that today will sound familiar to teachers in the United States and many other countries. In the 1970s, Finnish teachers had to keep diaries recording what they taught each hour. National school inspectors made regular visits to make sure teachers were following an exhaustive, seven-hundred-page centralized curriculum. Central authorities approved textbooks. Teachers could not be trusted to make their own decisions.

During the same time period, the Finnish government did something else, too—something that has never happened in the United States or most other countries. The Finns rebooted their teacher- training colleges, forcing them to become much more selective and rigorous. As part of a broader reform of higher education, the government shuttered the smaller schools and moved teacher preparation into the more respected universities. It was a bold reform, and not without controversy. Opponents argued that the new system was elitist and would, as one editorial warned, “block the road to our rural youth when their inner calling beckons them to a [teaching] career.” Some university leaders objected, too, fearing that the inclusion of such preprofessional, practical training might dilute academic standards for the rest of the departments and lower their institutions’ prestige. Interestingly, these same arguments were also made in the United States whenever anyone tried to make teacher training more selective.

Still, Finland was desperate to modernize, and the country’s leaders agreed that education was the only thing that could save their country from being left behind. The more I read the history and talked to Finns who understood it, the more I admired the common sense running through the story. The Finns decided that the only way to get serious about education was to select highly educated teachers, the best and brightest of each generation, and train them rigorously. So, that’s what they did. It was a radically obvious strategy that few countries have attempted.

Then, in the 1980s and 1990s, something magnificent happened. Finland evolved to an entirely new state, unrealized in almost any country in the world. It happened slowly, and partly by accident, but it explained more about Finland’s success than almost anything else.

With the new, higher standards and more rigorous teacher training in place, Finland’s top-down, No-Child-Left-Behind-style mandates became unnecessary. More than that, they were a burden, preventing teachers and schools from reaching a higher level of excellence. So Finland began dismantling its most oppressive regulations, piece by piece, as if removing the scaffolding from a fine sculpture.

In the early 1990s, an economic crisis accelerated this evolution, ironically enough. Because of a deep recession, Finland’s local authorities needed to slash spending. Education budgets had to be cut 15 to 20 percent. The only way local officials would agree to deep cuts was if they got something in return. So, national leaders agreed to grant even more autonomy to the locals, more than most other countries had ever dared to do. This liberation worked only because of all the changes that had come before. By then, the Finns had engineered a robust system with highly educated, well-trained teachers and relatively coherent (and high) standards. Once that system was in place, the accountability checks and balances were superfluous. School leaders and teachers were free to write their own lesson plans, engineer experiments within their schools to find out what worked, and generally design a more creative system than any centralized authority ever could. 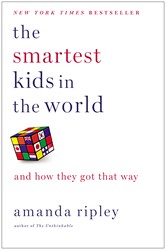 The Smartest Kids in the World
by Amanda Ripley

How Do Other Countries Create “Smarter” Kids? In a handful of nations, virtually all children are learning to make complex arguments and solve problems they’ve never seen before. They are learning to think, in other words, and to thrive in the modern economy.

What is it like to be a child in the world’s new education superpowers?

In a global quest to find answers for our own children, author and Time magazine journalist Amanda Ripley follows three Americans embed­ded in these countries for one year. Kim, fifteen, raises $10,000 so she can move from Oklahoma to Finland; Eric, eighteen, exchanges a high-achieving Minnesota suburb for a booming city in South Korea; and Tom, seventeen, leaves a historic Pennsylvania village for Poland.

Through these young informants, Ripley meets battle-scarred reformers, sleep-deprived zombie students, and a teacher who earns $4 million a year. Their stories, along with groundbreaking research into learning in other cultures, reveal a pattern of startling transformation: none of these countries had many “smart” kids a few decades ago. Things had changed. Teaching had become more rigorous; parents had focused on things that mattered; and children had bought into the promise of education.

A journalistic tour de force, The Smartest Kids in the World is a book about building resilience in a new world—as told by the young Americans who have the most at stake.