Punishment needs to be unpleasant, consistent, and swiftly administered — and never delivered while you are angry. Laurence Steinberg, Ph.D., author of The Ten Basic Principles of Good Parenting, explains.

Never discipline your child when you are angry. It only increases the chance that you will be excessively harsh, either physically or verbally.

There will inevitably be times when you are absolutely furious with your child. When he does not cooperate and you are in a hurry to get somewhere. When you have a pounding headache and he won’t stop nagging you. When she has ruined something that you really care about. When he has spoken to you in an extremely nasty or disrespectful way. When you discovered that she has been lying to you all along about something you’ve discussed several times.

In any close relationship, whether it is between relatives, spouses, friends, or parents and children, there are bound to be conflicts, arguments, and frustrations that leave one or both people angry. It is perfectly normal to feel angry at your child from time to time. This doesn’t mean that you’re a bad parent, that you have a bad child, or that you have a bad relationship.

There is a difference, though, between feeling angry at someone and letting that person have it. I’m sure you’ve been in plenty of situations where what you really wanted to do was scream, swear, or slap someone — but you didn’t. So you know that you can control your anger when you must. (If you can’t, you need to learn how. Uncontrollable anger may be entertaining to watch in a movie, but in real life, it’s not a winning trait.) Control your anger when you are disciplining your child. Make yourself do it.

I’ve said elsewhere that punishment is most effective when it is applied immediately. How can you do this, then, when your child has done something that has really made you angry?

When you feel yourself getting angry with your child over something he’s done, take a deep breath, count to three, and tell your child in a firm but measured tone that you are furious. Then wait until you’ve calmed down to actually do something about the situation. Explain why you are punishing your child, and then punish him.

With a child who is seven or older, you can also say something like “I’m so mad at what you did that I can’t even discuss it right now. But we are going to talk about this later.”

Make sure, though, that you actually do something once you’ve settled down (for example, deprive your child of something she likes or force her to do a chore that she detests). You want your child to associate your anger over her misbehavior with a genuinely unpleasant consequence. But you don’t want that consequence to be a slap on the behind or a verbal assault. Physical punishment and verbal abuse have harmful side effects.

The time that elapses between your telling your child that you are furious and the point at which you actually take action should be only as long as it takes you to calm down. Don’t draw it out any longer than you need to. Remember, you want to punish your child as close in time to the misbehavior as possible, because a swift response is more effective than a delayed response.

I know you’ve probably been told that it’s important for children to feel comfortable with their emotions, whether they are positive or negative. I agree that children should grow up feeling that anger, just like happiness and sadness, is a normal human feeling. And you may ask yourself if your excessively controlled expression of anger will stifle your child’s emotional development.

The answer is no, it won’t. There is no evidence that children who are exposed to open displays of parental anger are emotionally healthier than their peers, and plenty of proof that just the opposite is true. Children whose parents yell at them often are more likely to feel anxious and fearful and to have trouble controlling their own anger in their relationships with others.

Although it’s great for children to feel comfortable with their emotions, it’s also important that they learn to express them in ways that are socially appropriate. Hitting, yelling, and screaming are rarely effective ways of expressing anger or frustration. It’s important to help your child learn that he can feel angry and express his anger without losing control of himself or the situation.

If you are accustomed to disciplining your child when you are angry, following my advice about pausing before you act will feel oddly forced at first. Once you’ve tried it for a while, it will start to feel more natural.

Cut down on the yelling and screaming. Your child’s behavior will improve right alongside yours.

The Right Way to Punish
Now that you know what makes punishment effective — it needs to be unpleasant, consistent, and swiftly administered, and it should not be harsh — we can talk about how you should actually do it.

Effective punishment needs to include five elements, usually in the following order:

Try to do all five of these whenever you punish your child.

Your four-year-old had been whining because you won’t let her have a cookie right before dinner. Say something like this: “Please don’t whine when you want something (Identification). It puts me in a bad mood (Impact). If you are hungry and it is nearly dinner time, you can have a carrot or a piece of celery (Alternative). I’m going to put you in a time-out until you’ve settled down (Punishment). I know the next time I say you can’t have something, you won’t whine about it (Expectation).”

By the way, a good rule of thumb is that a time-out should last one minute for each year of your child’s age (that is, four minutes for a four-year-old). When you put your child on a time-out, make her sit by herself in a place where there is nothing for her to do but sit there. (Don’t put her on a time-out in a room where she has things to play with.) Ignore her during the time-out, even if she complains, and go about your business. If she gets up before the time-out is over, tell her firmly to return to where she was sitting, that you are making the time-out longer because she got up, and add thirty additional seconds to the amount of remaining time.

Your six-year-old has been told not to color with markers while sitting on the living room couch, but you see your child doing this anyway. Say something like this: “I’ve asked you not to color with your markers while you are sitting on this couch (Identification). These markers leave stains that are very hard to clean (Impact). When you want to color, please do it at the kitchen table (Alternative). Please give me your markers. You are not allowed to use them for a week (Punishment). I know you probably just forgot this time, but it’s important that you remember next time (Expectation).”

When it is possible, link the punishment to the infraction. Taking away a toy that a child has misused for a period of time is good way to reinforce the rule.

Your nine-year-old has tracked mud all over the kitchen floor, even though you have repeatedly asked him to make sure his shoes are clean before he comes in from playing outside. “I’ve told you lots of times that you need to wipe your shoes so that you don’t track mud all over the house (Identification). I just cleaned the floor, and now it needs to be cleaned again (Impact). There’s a mat outside the back door. If you can’t get the dirt off by wiping your shoes on the mat, just take your shoes off and leave them outside (Alternative). Now, please get a mop and clean the floor (Punishment). You’re usually so good about everything—please try to remember next time (Expectation).”

Having a child undo damage that he’s done is an effective punishment as long as the task is onerous enough to make him regret his infraction.

Your thirteen-year-old has told you that she spends her afternoons at the house of a friend whose mother is home, but you discover that the mother is never there. You are furious that she’s been lying to you. Say something like this: You told me that Susan’s mother is always home when you go over there. You know that you are allowed to go over to a friend’s house only if an adult is present (Identification). If I  don’t know where you are after school, it makes it very hard for me to concentrate at work (Impact).If you want to do something after school other than what we’ve agreed on, I want you to call me at work and ask permission first (Alternative). Right now, I’m too angry with you to discuss this, but I do want to talk about the fact that you lied to me. Please go to your room, and I will be there in a few minutes. [After a few minutes.] I’ve decided to ground you for a week, starting today. That means coming straight home after school every day and staying home every evening and over the entire weekend (Punishment). You’ve rarely lied to me before. From now on, I expect you to tell me the truth (Expectation).”

Remember, never discipline your child when you are angry.

Your sixteen-year-old, who has a learner’s permit, has taken the family car for a drive without your knowledge, even though he has no license. He’s one week away from taking his driver’s test.  “It’s against the law for you to be driving without an older, licensed driver in the car with you. You may already know how to drive, but until you’ve passed your driver’s test, you are not allowed to drive on your own (Identification). You and I can get into a lot of trouble for this (Impact). If you need to go somewhere and I am not around, ask someone who has a license to come pick you up (Alternative). Because you’ve done this, I’m not permitting you to take your driver’s test for another month (Punishment). I’m sure you understand why obeying the law has to be the rule around here (Expectation).

Again, when possible, link the punishment (delaying the driver’s test) to the offense (driving without a license).

Whenever you need to punish your child, try to follow this general outline: Identify the infraction, describe its impact, suggest an alternative, describe the punishment, and say you expect better behavior next time.

That’s the right way to punish. 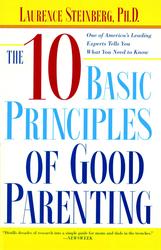 Most parents do a pretty good job of raising kids, says psychologist Laurence Steinberg, but truly effective parenting means not just relying on natural instincts but also on knowing what works and why. In The Ten Basic Principles of Good Parenting, Dr. Steinberg distills decades of research into a parenting book that explains the fundamentals of raising happy, healthy children, giving readers an invaluable map to help them navigate parenthood from infancy to adolescence.