I live in Los Angeles and am a stay-at-home mom with two children. When my son was starting kindergarten, my husband and I expected certain adjustments for him—separation anxiety, socialization issues, exhaustion from the demands of learning. What we didn’t expect was an adjustment issue of our own: the birthday party predicament.

Having lived in L.A. for a few years prior to kindergarten, we had heard birthday party stories: glamorous, high-powered parents with lots of money, lots of guilt and not much time trying to top each other with piñatas stuffed with $5 dollar bills, swimming pools drained and filled with salt water and barking seals, goodie bags from MOCA! To these people, their child’s birthday party is a tone setter, a first impression that says, “This is who we are and would you like to get your face painted?” But we thought we had avoided all of this.

We had chosen our son’s school—a low-key Episcopalian one—for its committed teachers, its sweet and polite children, and its uniforms. We saw the uniforms as a great leveler of class and affluence barriers in the land of “I can do anything better than you.” What we didn’t realize was that at school in their light blue shirts and dark blue pants everyone might be equal, but after school, the gloves were off.

The first birthday party we attended was a catered affair in a private room at the House of Blues on Sunset Boulevard—the flagship location of the chain of rock ‘n roll nightclubs. Walking in, I felt slightly guilty about the $9.99 tub of plastic dinosaurs from Ross I had brought as a gift, but I ate a lot of pasta salad and soon I felt better. After the kids had feasted on pizza and chicken, there was a reptile show with iguanas, chameleons, and an absolutely huge snake that was passed around and then placed on a mom’s head. The kids had fun, but for me it was less like a birthday party and more like going out to lunch. I enjoyed sitting on the overstuffed furniture, eating food I didn’t have to cook off a china plate, chatting with the other parents.

But I wondered, who was the party really for? Was all this really necessary? It was probably costing more than my wedding. I mean, my wedding didn’t have valet parking. I also couldn’t help but wonder if, for the kids, the same effect could be achieved with, say, a rented video and a little cereal tossed on the floor.

To compete or not to compete—that was the question we faced for the next few months before our own son’s birthday. Should we pull out all the stops so people wouldn’t think we didn’t care, or, God forbid, we couldn’t spare the money? Or should we just low-key it and blame it on our own Generation X-ness? We agonized over a party at a gym (too expensive), our apartment (too small), our backyard (we didn’t have one). Then we struck upon an idea: bowling and pizza. What could be more wholesome and fun? It even had an anti-establishment, blue-collar feel to it. Bowling and pizza? Three hundred dollars. That nixed that. The money we’d need to even contemplate becoming serious contenders in this contest was being spent on tuition.

In the meantime, the competition was closing in from behind. At party for a friend of my younger child, a petting zoo was set up in the backyard complete with “farmhands” dressed in overalls and red-checked shirts. The children could enter a sparkling clean corral filled with fresh straw and pet bunnies, ducks, and goats while Aaron Copeland’s “Appalachian Spring” played on a boombox. I couldn’t stop thinking about what they had given the animals to keep them from pooping. In that respect, it was certainly unlike any farm I had ever been to. Then I overheard a man reminding a toddler that they had met before in Hawaii while he and her mommy were making Jurassic Park—didn’t she remember? It was at this moment that I grabbed my husband’s arm and told him we had to leave. “The party?” he asked. “No, Los Angeles,” I answered.

Whatever happened to Musical Chairs? Remember when a birthday party was at someone’s house, and they decorated the dining room with crepe paper and balloons, and you played games? Pass the Parcel? Pin the Tail on the Donkey?

We finally decided to have my son’s party at the beach. It was a gorgeous cool February day, and the kids flew kites. My son loved his Pikachu cake that my husband had cleverly crafted and iced a fluorescent yellow. At the very end of the party, a California Grey Whale rose up out of the ocean, shooting spray out of its blowhole. All the kids ran down to the water, screaming and pointing. The whale breached, rolled over and flipped its tail up in the air as if it were waving at the children and wishing my son a happy birthday. There was a stunned silence as everyone absorbed this vision of nature’s power and beauty.

My husband and I looked at each other and smiled. We had pulled it off. Not only had we thrown a terrific party for about 50 bucks, including bagels, cream cheese, fruit salad, cake, and $1.99 kites as party favors, it had all been capped by a perfect moment—a celebrity sighting of one of the largest mammals on earth.

It was a day we would all remember and our son was thrilled. We turned away from the water and walked slowly back up the beach, chatting about how beautiful and rare it was to see a whale. Then one of the dads tapped me on the shoulder. His own child’s birthday was coming up and he wanted to know if I would mind giving him the whale’s card. 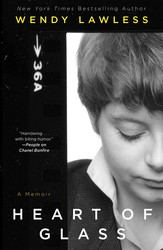 Heart of Glass
by Wendy Lawless

In this edgy and romantic follow-up to her New York Times bestselling debut memoir, Chanel Bonfire, Wendy Lawless chronicles her misguided twenties—a darkly funny story of a girl without a roadmap for life who flees her disastrous past to find herself in the gritty heart of 1980s New York City.