The bond between a father and his child is special and sacred. And one that should be remembered not just during Father’s Day. It takes great strength and selflessness to be a good father; to love unconditionally and without hesitation. DAD captures the joys—and the occasional frustrations—of fatherhood, with contributions from actors to athletes and presidents to poets.

Take a break from the blissful chaos of family life to read these poignant, funny, and insightful looks at fatherhood. From the elegant words of ancient scholars to Louis C.K.’s brutally honest assessment of his parenting skills, these quotes are sure to make your Dad smile and remember: You are appreciated; you are admired; you are loved.

Barack Obama, 44th President of the United States
What I’ve realized is that life doesn’t count for much unless you’re willing to do your small part to leave our children—all of our children—a better world. Even if it’s difficult. . . . That is our ultimate responsibility as fathers and parents. We try. We hope.

Taylor Swift, Musician
My dad believed in me, even when I didn’t. He always knew I could do this.

Hugh Jackman, Actor
When I come home, my daughter will run to the door and give me a big hug, and everything that’s happened that day just melts away.

David Bowie, Musician
I don’t expect the human race to progress in too many areas. However, having a child with an ear infection makes one hugely grateful for antibiotics.

Louis C.K., Comedian
I found out that I’m a pretty bad father. I make a lot of mistakes and I don’t know what I’m doing. But my kids love me. Go figure.

Jimmy Fallon, Comedian
I didn’t think it was going to be this fun. But everything just gets heightened when you have a baby. The volume gets turned up on life. I never knew I could be this happy, and that’s the truth.

Joe Biden, 47th Vice President of the United States
My dad always said, “Champ, the measure of a man is not how often he is knocked down, but how quickly he gets up.”

Justin Timberlake, Musican
[Fatherhood] is the most insanely amazing, most beautiful, unbelievable thing that can ever happen to you.

But don’t start thinking that poignant Father’s Day quotes are enough. They should at least be paired with a homemade brunch. Say “I Love You” with these brunch recipes. 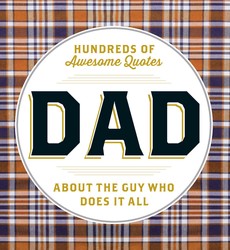 This handsome, two-color collection highlights more than 400 quotes about fatherhood from notable dads in the worlds of sports, politics, the arts, and more.“My dad believed in me, even when I didn’t. He always knew I could do this.” —Taylor Swift The relationship between father and child is one that embodies love, protection, and pride. From Sidney Poitier wanting to be just like his dad to Jimmy Fallon describing fatherhood as a whole new level of happiness, these voices soar when describing the profound influence a father can have. With quotes by and about fathers, including everyone from Barack Obama and Matt Damon to Sigmund Freud and Meryl Streep, Dad is the perfect gift for the most important man in all of our lives.