When it comes to being a good parent, the most important resources are the words that come out of your child’s amazing mouth. (If your child is too young to speak, guess accurately on the first try.) In The Honest Toddler, we examine some particularly dangerous parenting influences.

Battle Hymn of the Tiger Mother by some lady

Ah, there’s nothing like the smell of a child’s freshly broken spirit in the morning. Are. You. Serious.

I was recently made aware of the terrible book Battle Hymn of the Tiger Mother, and after I stopped crying, I went to my local library and soaked a copy in grape juice. Then I made sure to consume several of the pages so they’d be processed into something more suitable.

It’s easy to spot Tiger Kids at the park. Instead of playing, they’re trying to calculate how the angle of the slide will affect the appearance of their overly starched Ralph Lauren jumpers. Who am I kidding, they don’t go to the park—their afternoons are spent in tutoring centers. Don’t bother sharing your cookies; they have their nightly weigh-in to consider.

Parents who get excited about sucking the fun out of their toddler’s life should have adopted a stuffed animal instead of having an actual human baby.

If Battle Hymn of the Tiger Mother appeals to you, please carefully fold your toddler’s clothes, place them in a sturdy suitcase, and send him off to live with Grandma. Don’t bother packing those Your Baby Can Read! DVDs, since your kid will be too busy having a—what’s the word I’m looking for—CHILDHOOD. Since you’ll be relieved of your child-raising duties, feel free to get a new job as a prison guard or an electroshock therapy technician. Use those flash cards to create a papier-mache child who will never disappoint you.

Bringing Up Bébé by another person

“French kids never cry at the dinner table.” Why would they? Have you seen those baguettes? If someone gave me a piece of bread shaped like a sword, I’d be satisfied into a state of silence, too.

Look, I don’t have anything against Parisian toddlers, but I need their parents to stop lying. I don’t care if your toddler is from Zimbabwe or New Jersey: The kid is going to have loud responses on a regular basis. It’s part of toddler/thug life. You’re really going to tell me that a child being served p.t. (think peanut butter but with animal parts and lard) isn’t having a loud response? Riiight. Parents, don’t let Bringing Up Bébé shame you into thinking there’s something wrong with not being refined. Chuck E. Cheese’s could be a five-star restaurant if stars were given out based on sticky surfaces. Cloth napkins are as crazy an idea as cloth toilet paper. Some things are meant to be disposable. You don’t even need real plates if you’re doing the right thing by your family and ordering pizza.

If you’re so dedicated to having a calm dinner experience, why did you have children in the first place? Don’t try to make your toddler an honorary member of the French Legion just because you can’t handle your responsibilities. If you’re really dedicated to introducing a little Frenchie into your home, start and end with chocolate croissants.

In conclusion, this book is full of lies because one of my best friends is from Lyon, and she once took a poo-poo under the table during Christmas dinner. Deal with that.

Solve Your Child’s Sleep Problems by a fake doctor

Dr. Ferber lives in an abandoned barn in Bakersfield, California, with 106 snakes. One day, as a joke, he decided to write a hilariously crazy book about getting children to sleep through the night by ignoring their basic needs. Unfortunately, the book fell into the wrong hands and was published. Parents around the world who were tired of missing their eight P.M. shows began putting Dr. Ferber’s awful ideas into practice.

While the technique is used mostly with infants, you may be tempted to try Dr. Ferber’s cry-it-out method on your toddler. Question: Have you ever asked yourself what the “it” being cried out is? It’s love. Your child is crying out the love. And while you are standing by the door like a fool, the love is floating out the window.

Children who have been “sleep-trained” grow up to be confused individuals full of problems. Not only will they never eat produce, they won’t get any back teeth. Seven out of eight toddlers who have cried it out can’t distinguish between an apple and an orange by high school. They are incapable of playing musical instruments.

As we speak, Dr. Ferber is in protective custody due to threats by numerous toddler groups. 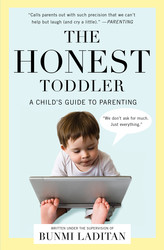 The Honest Toddler: A Child’s Guide to Parenting
by Bunmi Laditan

Are you the confused parent of a toddler?Are you constantly disappointing the 2T in your life? Are you tired, stressed out, and looking for relief? I can’t help you with that last one, but if you want to become an A+ servant to your small child, this book is for you. Who better to teach you about toddlers than another toddler? The hard-hitting knowledge in The Honest Toddler will save you thousands of dollars in unnecessary whole grains and toothbrushes. Happy reading. You’re doing the right thing. For once.