At home my kids can challenge me; they can call me an a-hole. They can argue their case for watching Glee or Family Guy before they start their homework or extra math. But when we are out and about–that’s an entirely different story. From Parentology.

Not only is there a list of verboten words when they interact with their cousins Dante and Diego (such as marijuana, vivisection, and anal), they are required to act slightly civilized all around. Only slightly civilized to me, that is. They are expected to be 100 percent polite to others. There’s nothing more important to me than behaving extremely civilly to folks one interacts with in the agora. I couldn’t care less if my kids argue with the authority figures in their lives, such as their teachers or principal. In fact, I encourage arguing, assuming they do it in an appropriately polite manner. But when it comes to civil society interacting with their friends’ parents, ticket collectors, waiters, pedestrians, meter maids, lawyers, and the entire public, they need to be on their absolute best church-lady behavior. Okay, they can argue with lawyers and bankers.

When I was dean at NYU, I learned a little tip from my boss when it came to interviewing job candidates. Academic interviews typically last a couple days and are more akin to rushing a fraternity or sorority than they are to the typical entry-level interview process at most firms. The candidate not only gives a public lecture and meets one-on-one with the faculty members and graduate students in the department; she has to eat several meals with her interlocutors and may even be invited to go out drinking or to the theater or some other event if the department is rolling out the red carpet for an academic bigwig. The folks coordinating her schedule and shuttling her between the various offices for this breakneck itinerary of meetings are usually administrative staff or work-study students. Assuming the candidate passes the other tests, these administrative assistants are the ones to debrief in order to assess the “true” personality and collegiality of the interviewee. To put it bluntly, I want to find out if the professor “kisses up and shits down.” If she has the least bit of sense, she is of course going to be on her best behavior with me. I’m the dean for heaven’s sake—even if I come to work in a V-neck T-shirt and ratty blue jeans. It’s the folks who “don’t matter”—the nonfaculty workers who process her travel reimbursements and make sure the hotel and dinner reservations are made—that get to see the real side of the candidate. And to whom she may show her true colors.

So, I want my kids to grow up appreciating the incredibly privileged lives they get to lead—whether they end up fencing for the Ivy League or a junior college. They must say please and thank you. I make them look the homeless panhandlers in the eye and say hello when we pass them on our block. And if they ever interview for a professorship, they have to send a thank-you email to the secretary who arranged the entire visit—and not merely to help their chances of getting the job.

But as for me? I’m their verbal punching bag, their stress release valve. In short, their wimpy, pocket-protector, Parentologist nerd dad. Under this hybrid philosophy, they not only learn how to argue comfortably with authority figures, they also learn about the difference between the public and private spheres. They don’t suffer the ill effects of the American “cult of self-esteem” thanks to being called retarded every so often. And as a bonus, they start to learn the map of the American social class hierarchy and the reality behind the fiction we perpetuate that, in fact, we are a classless society. 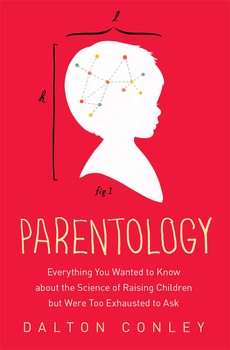 Parentology hilariously reports the results of Conley’s experiments as a father, demonstrating that, ultimately, what matters most is love and engagement. He teaches you everything you need to know about the latest literature on parenting—with lessons that go down easy. You’ll be laughing and learning at the same time.