Once I landed my book deal, I had visions of becoming a writer. I would camp out at Starbucks and nurse my cup of coffee while typing furiously on my laptop. I would slave away through the early morning hours, burning the midnight oil because inspiration struck. I would be driven and dedicated and productive. Or, not…

Sadly, my process looked more like this:
Walk the dog, make the lunches, pack the bags, get the kids dressed, drive them to school, and come back home.

Open up the computer and write a sentence.

Suddenly, see an e-mail alert. Know I should ignore it, but what if it’s important? It would be irresponsible not to at least check it.

See that it’s a Groupon. Maybe not vital, but certainly time sensitive. I debate for five minutes if saving $13 at a restaurant I’ve never planned on eating at is worth it. I decide that, indeed, it is.

Tap nails on the keyboard while waiting for the credit card to clear.

Head upstairs for nail file and pass a towel on the floor.

The towel reminds me that I have laundry in the washing machine which needs to be dried.

Take lint into bathroom to throw away and glance in the mirror. Shit, when did my eyebrows start looking like that?

Study face. Is that really what I look like?

Note to self: Invest in some wrinkle cream, STAT.

Wrinkle cream is expensive. Need to make money. Ahhh, the book. Have to write the book to get the money. Crap.

Go downstairs and stare at previously written sentence. Doesn’t seem so genius upon reflection. Delete it.

Was that noise my stomach? Yes, it was. Suddenly, I’m starving and can’t possibly concentrate.

What do I want to eat? Maybe I’ll go on to Twitter for some lunch ideas; I haven’t been there all day.

Get sucked into the Twitter abyss for 15 minutes. Head starts to pound. Need food.

Make a turkey sandwich and use the last slice of bread.

How do I need more bread already? Jot down a note to stop at the store on the way to get the kids.

Check the fridge and pantry to see what else we’re low on. Quite a bit, it seems.

Notice plants are dying and water them, reflecting on what a terrible idea plants are for a mother of three.

Sit back down at the computer with soda and sandwich.

Go back to the chapter.

Bounce between post and book for nearly an hour, completing neither one. Notice that it’s time to leave to get the kids and I missed my window to grocery shop. How did that happen?

Still have no chapter, no blog post and now no food.

Vow to be more productive tomorrow.

How this book got written is beyond me.

Jill Smokler blogs about motherhood; the good, the bad, and the scary at scarymommy.com. You can follow her on Twitter as @ScaryMommy or join her on Facebook. 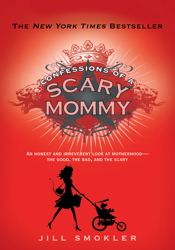 Confessions of a Scary Mommy
by Jill Smokler

When Jill Smokler was first home with her small children, she thought her blog would be something to keep friends and family updated. To her surprise, she hit a chord in the hearts of mothers everywhere. I end up doing my son’s homework. It’s wrong, but so much easier.Total strangers were contributing their views on that strange reality called motherhood. As other women shared their stories, Jill realized she wasn’t alone in her feelings of exhaustion and imperfection. If you’ve not encountered Scary Mommy before, break out a glass of champagne as well, because you’ll be toasting your initiation into a select club. I know why some animals eat their young.In chapters that cover husbands (The Biggest Baby of Them All) to homework (Didn’t I Already Graduate?), Confessions of a Scary Mommy combines all-new essays from Jill with the best of the anonymous confessions.