Are comics the “gateway drug to literacy?” Here’s how they can boost your child’s literacy skills, and how their cartoony fonts and illustrations helped my young daughter, Olive, learn to read. From Born Reading: Bringing Up Bookworms in a Digital Age–From Picture Books to eBooks and Everything in Between.

In grade school, I literally dissected the full-color Sunday morning comic pages in the Detroit Free Press. I would cut out Bloom County, Garfield, Calvin and Hobbes, and other classic comics, pasting the strips into photo albums like rare artwork.

I moved on to comic books a few years later, collecting Wolverine, Spider-Man, X‑Men, and a few other series with my allowance. I’m excited to share these comics with Olive someday, but in the meantime, I’ve found some amazing comic books for kids.

New Yorker art editor Françoise Mouly has championed comic book creators for most of her professional life. She co‑edited the legendary RAW comics anthology with her husband, Maus author Art Spiegelman. She told me that too many parents have a bad attitude about comic books. She traced this prejudice back to the legacy of an old anti–comic book crusade that profoundly changed the landscape of American children’s reading.

“There was a moment in the 1950s where 94 percent of kids growing up in America, boys and girls, were reading comics,” she told me. Then, in 1954, a doctor named Fredric Wertham published Seduction of the Innocent, a nonfiction book that blamed comic books for juvenile delinquency and prompted a congressional crackdown on the medium. “They did the same thing with rock and roll and they did the same thing with video games. It’s something that scares the grown-ups and the parents when all of the kids are absorbed for hours with a medium,” Mouly said.

Pushing back against anti–comic book forces, Mouly founded TOON Books in 2008. This Candlewick Books imprint specializes in gorgeous editions of comic books for kids. Her husband once summed up the simple power of a great comic: “Comics are a gateway drug to literacy.” Using great artists from around the world, TOON Books bridges the gap between picture books and superhero comic books.

Olive discovered her first TOON Books title at the library when she was one and a half years old. She grabbed a copy of Art Spiegelman’s Jack and the Box, a screwball comic about a kid meeting a crazy jack-in-the-box toy. The comic book panels are simple and vivid, perfect for an early reader. As Olive got older, she graduated to other favorites like Silly Lilly by Agnès Rosenstiehl and Luke on the Loose by Harry Bliss. Mouly shares a few tips for reading comics with kids:

How to Read a Comic Book with Your Child

1. Find a comic book that you like to read. “Anything that you do with your child in your lap and that you enjoy is going to have the right effect.”
2. Guide your child through the different panels. “Keep your finger on the character that is talking, but make sure you don’t block out the speech balloon or facial expressions.”
3. Have your child guess the sound effects. “Their guess is as good as the artist’s guess as to what sound the character makes.”
4. Let your child help dramatize the story. “You can actually assign parts in the comic book, you can have the dialogue and the back and forth.”
5. Ask your kid to tell his or her own version of the story. “If three-year-old readers you had an adventure with Luke, what would happen if Luke goes on vacation with his parents to the beach?”

But these books do much more than introduce your child to comic books. “We live in an increasingly visual culture,” explains Mouly. “If they know how to read comics, then they will know how to watch television and they’ll know how to look at YouTube videos on the net. Because they’ll see the visual narratives in a very grammatical way. It’s really good training for any kind of building block of understanding storytelling and narrative.”

Comics can literally teach your child how to follow a story on a page, a valuable skill for kids figuring out how to decode books. One-year-olds can handle Silly Lilly or Jack and the Box, the pages filled with simple frames and a small series of actions.

But don’t let age limits slow you down. As a two-year-old, Olive obsessed over The Shark King by R. Kikuo Johnson, a folklore-inspired story about a shape-shifting shark man. Even though the book was intended for much older kids, Olive loved the fairy tale imagery and didn’t blink at the magical plot.

Olive also devoured The Big Wet Balloon by Liniers, a book about two sisters exploring their backyard during a summer rain. At the end of the book, the author includes a photograph of his real-life daughters with a homemade drawing that inspired the story.

That picture prompted Olive to make her own drawing as soon as we finished the book. Those little girls were real to her; she could imagine their adventures beyond the pages. “The goal is for somebody to make the story happen in their head when they are given the book,” Mouly summarized. “Comics are a very good starting point for that.”

Disney Interactive editor in chief Catherine Connors reminded parents not to worry about formats: “Some kids respond to comic books, some kids respond to stories presented in a more interactive form,” she said. “If you can use that as a gateway into the stories and more traditional media, you basically lure them in with the power of the narrative itself while worrying less about what the form is that it is being presented in.”

Comic books are perfect for practicing early literacy skills. Parents can point out short, capitalized letters inside comics. Phrases like “Bang!” “Ha,” or “Yaaaa!” punctuate action scenes inside these adventure books, and your child will love reading the letters out loud on the page.

You can see these exuberant comic book fonts in the work of Mo Willems too. In Pigs Make Me Sneeze!, Willems’s elephant sneezes for 30 pages. The running gag is that his “a-a-a-a-a” presneeze gets longer and the mighty “CHOO” gets louder every time. The letters get bigger and bigger as the book gets sillier and sillier.

While taking a bath, Olive reenacted Pigs Make Me Sneeze. Surrounded by bubbles, she giggled like crazy going “Ah-CHOOO!” as I pretended to be blown away by her sneeze. By the time my wife tucked her in that night, Olive had no problem identifying these letters written in cartoony fonts.
She was reading. 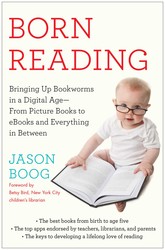 Born Reading: Bringing Up Bookworms in a Digital Age — From Picture Books to eBooks and Everything in Between
by Jason Boog

A program for parents and professionals on how to raise kids who love to read, featuring interviews with childhood development experts, advice from librarians, tips from authors and children’s book publishers, and reading recommendations for kids from birth up to age five. Every parent wants to give his or her child a competitive advantage. In Born Reading, publishing insider (and new dad) Jason Boog explains how that can be as simple as opening a book.