It’s important for your child to stay active and get fresh air, regardless of the season.  In order to make sure you and your little one are prepared for the winter months, Linda Åkeson McGurk, author of THERE’S NO SUCH THING AS BAD WEATHER, shares tips to make sure everyone is warm, comfortable and happy.

A comfortable child can play outside for hours, so high-quality outdoor gear and play clothes are well worth the money. If the clothes are durable, chances are they can also be handed down to younger siblings.

Any advice about dressing children for the outdoors naturally depends on what they will be doing and where. For example, going on a long hike in the mountains or participating in other strenuous activities away from home requires more attention to layering than playing in the backyard. The child’s age also matters, since young children move around less and get cold more easily. Keep in mind that weather conditions can change quickly in some areas, and always bring some backup clothes for longer outings. What to look for in outdoor gear and play clothes for children in general:

The same layering principles apply as for winter, but with lighter or fewer layers.

Make a mental breakdown of your child’s wardrobe into “playclothes” and “school clothes” to avoid stressing over. Damage wrought by messy outdoor play. Hand-me-downs, yard sale finds, and older clothes with holes or stains that won’t come out make excellent candidates for playclothes.

Planning a hiking trip with your little one in the summer? Check out these helpful hiking tips. 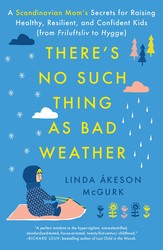 “A perfect antidote to the hyper-vigilant, extra-electrified, standardized-tested, house-arrested, 21st-century childhood.” —Richard Louv, bestselling author of Last Child in the Woods and Vitamin N Bringing Up Bébé meets Last Child in the Woods in this lively, insightful memoir about a mother who sets out to discover if the nature-centric parenting philosophy of her native Scandinavia holds the key to healthier, happier lives for her American children.When Swedish-born Linda McGurk moved to small-town Indiana with her American husband to start a family, she quickly realized that her outdoorsy ways were not the norm. In Sweden children play outside all year round, regardless of the weather, and letting young babies nap outside in freezing temperatures is not only common—it is a practice recommended by physicians. In the US, on the other hand, she found that the playgrounds, which she had expected to find teeming with children, were mostly deserted. In preschool, children were getting drilled to learn academic skills, while their Scandinavian counterparts were climbing trees, catching frogs, and learning how to compost. Worse, she realized that giving her daughters the same freedom to play outside that she had enjoyed as a child in Sweden could quickly lead to a visit by Child Protective Services. The brewing culture clash finally came to a head when McGurk was fined for letting her children play in a local creek, setting off an online firestorm when she expressed her anger and confusion on her blog. The rules and parenting philosophies of her native country and her adopted homeland were worlds apart. Struggling to fit in and to decide what was best for her children, McGurk turned to her own childhood for answers. Could the Scandinavian philosophy of “there is no such thing as bad weather, only bad clothes” be the key to better lives for her American children? And how would her children’s relationships with nature change by introducing them to Scandinavian concepts like friluftsliv (“open-air living”) and hygge (the coziness and the simple pleasures of home)? McGurk embarked on a six-month-long journey to Sweden to find out. There’s No Such Thing as Bad Weather is a fascinating personal narrative that highlights the importance of spending time outdoors, and illustrates how the Scandinavian culture could hold the key to raising healthier, resilient, and confident children in America.