Sebastian Maniscalco is either the funniest foodie or the hungriest comedian you’ve ever met. You may recognize him from his appearances on Conan or Comedians in Cars Getting Coffee or the Pete and Sebastian show on SiriusXM. But if he’s new to you, now’s your chance to make a meal of this tireless performer. In this excerpt from his new book, STAY HUNGRY, he reveals that the key to success for dads-to-be is not being afraid to say “Yes!” to ice cream…and knowing how to cook the perfect steak.

If one person in a relationship goes on a diet, it’ll never work. It has to be both of you.

Once, I told Lana I wanted to do a juice cleanse, and she said, “But I don’t want to.” I wasn’t asking her to do it, but by her logic, if I did a weeklong juice cleanse, we wouldn’t be able to go out to restaurants. We wouldn’t cook together, which we love to do, or have wine at night. Forget dinner dates with friends, or sitting around the kitchen table with coffee. I wouldn’t have the energy to take long walks or go for a run with her. By doing a cleanse, I’d be depriving her and us of the things we enjoy doing together.

By the same token, if one person is eating no-holds-barred, including stuff she’d typically avoided like ice cream and doughnuts, then the other person has to eat it all, too. I made the decision early on in Lana’s pregnancy that I’d partake. So if she said to me, “I’m going to order some ice cream to be delivered. You want?” The answer was “Yes!”

Ordering ice cream at night became a pattern during the pregnancy. If a wife is going to have a bowl of it in bed at 9 p.m., then, as a good husband, you better be right there next to her. Pregnancy gave me the excuse to feel liberated to eat whatever I wanted without guilt. There were no juice cleanses during this time to say the least. We basically did a world tour of cuisines from the comfort of our home, thanks to Postmates, a delivery service where you can get any meal from any restaurant brought to your door.

How to Make the Perfect Steak (and Keep Your Spouse Happy)

Lana often craved steak, so I had recently learned how to cook it properly. I used to just throw a steak on the grill, and it always came out uneven. The outside would burn, and the inside was raw. I researched online the perfect method for getting a nicely seared, evenly cooked medium rare steak by doing it slow at a low temperature to allow the meat to retain the juices. My recipe:

Always juicy and delicious. Try it!

Slimming Down Before Baby #2

Our favorite nighttime snack is popcorn. My wife makes an unbelievable batch in the Whirley Pop (a pot with a churner inside for perfect popping). She puts a little vegetable oil in the pot, heats it up, and then pours in Boulder Popcorn’s Cambria’s Cream small kernels, and starts whirling. When it’s done, it goes in a bowl, lightly salted. During the pregnancy, we were knocking down bowls of it every night.

I know some expectant fathers complain behind their wives’ backs about how much they’re packing away. I was glad Lana was indulging! I figured, if she was eating, the baby was eating, too. And so was I! The results were all too predictable: When Serafina was born in April 2016, I was the heaviest I’d ever been, at 208 pounds. I gained 23 pounds during the nine months of Lana’s pregnancy, which was nearly the same amount she gained. (I’m down to 198. Only thirteen pounds to go. Ideally, I’ll lose it before Lana gets pregnant again, before I go right back up.)

Dude, you’re going to be a dad. 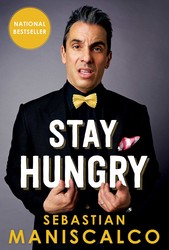 This inspiring, honest, uproarious collection of essays traces Sebastian Maniscalco’s career from playing boxing rings and bowling alleys to reaching the pinnacles of comedy success.At twenty-four, Sebastian Maniscalco arrived in LA with a suitcase and saved up minimum wages. He knew no one and nothing about standup comedy, but he was determined to go for it anyway. At forty-four, he’s on the Forbes’ list of highest earning comedians, sells out arenas, and has starred in four hit comedy specials including Why Would You Do That? on Showtime. Stay Hungry tells the story of the twenty years in between. On the way from clueless rube to standup superstar, Seb was booed off stages; survived on tips and stolen food; got advice from mentors Andrew Dice Clay, Vince Vaughn, Tony Danza, and Jerry Seinfeld; fell in love; and stayed true to his Italian-immigrant roots. The one code that always kept him going: stay hungry, keep focused, never give up, and one day, you’ll make it.