Parenthood can be very rewarding, but let’s face it, so are margaritas at the adults-only pool. As someone content with my decision not to procreate, why do friends, family, and strangers keep trying to change my mind?

The way most people feel about loving being a parent is exactly how I feel about not being a parent. I love it. And I can’t imagine my life any other way. I’m one of those people in an ever-growing movement called child free by choice. I think it’s a clinical and defensive name for what sounds like an otherwise fun group of people. I’ve never actually seen members of this movement all in one place. I guess we’re not as organized or fabulous or as into riding floats as gay people. We live in pockets of cities and suburbs all across America and the world and we may not have anything else in common with one another except that none of us right now has a toddler saying, “Mommy, please put a shirt on. It’s inappropriate to sit around the house in a bra and why is there a peacock on your head?”

So while I sit here on my couch at home dressed like someone halfway to senility, I’m remembering the time that I was sitting on a couch in my psychologist’s office, wondering whether it was weird that I still had my sunglasses on my head during our session. I wondered whether I was too accessorized for sitting around figuring out my problems and analyzing my patterns. It feels like I should treat therapy like going through airport security (which I do a few times a month as a traveling stand-up comedian)—I should have nothing in my pockets, no shoes and no jewelry around my neck, nothing on my outside that can distract the person in front of me from seeing what I look like on the inside.

That day I said to my shrink, “I feel like an outsider in the world because I never want to have children. When people ask me if I want children and I say no—they always say things like ‘You’ll change your mind.’ I’m sick of it and I feel like I don’t fit in.” I don’t know what I expected my therapist to say—probably her usual: “Was there a time in childhood when you felt like an outsider? Is this pushing any old buttons? You know if it’s hysterical, it’s historical.” What I didn’t expect was that she’d say, “You don’t want kids? Why not? What’s up with that?” What’s up with that?

“Oh no,” I said. “Not you too! You’re going to tell me I’m weird for not wanting children?” She explained that it’s my reaction to those people that we need to work on—and that we don’t need to attach any jumper cables to my biological clock. She suggested that instead of answering, “I don’t want kids,” that I should simply say, “It’s not in my plans right now.” Oh boy. She had no idea what I was up against at every cocktail hour/wedding/shower/holiday party I’ve been to since I started to ovulate. I’m convinced that people who want kids and people who have kids have secret meetings where they come up with their talking points. There’s not one response to “I’m not having kids” that I haven’t heard and I’ve heard the same questions and comments approximately one bazillion times:

• If you don’t have kids, who is going to take care of you when you’re old? (Servants?)
• Men have to spread their seed. It’s in their DNA. (He can spread his seed all he wants. I have a magic pill that prevents it from growing.)
• But it’s the most natural thing you can do as a woman. (So is getting my period every month.)
• That’s selfish. You can’t be immature forever. (And spending your days watching Dora the Explorer with a kid is mature?)
• You have to replace yourself on earth. What will you leave behind? (There are a few plastic bags that I never recycled . . .) 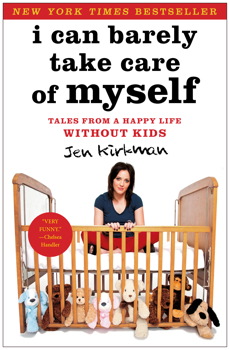 I Can Barely Take Care of Myself: Tales From a Happy Life Without Kids
by Jen Kirkman

That’s what everyone says to Jen Kirkman— and countless women like her—when she confesses she doesn’t plan to have children. But you know what? It’s hard enough to be an adult. You have to dress yourself and pay bills and remember to buy birthday gifts. You have to drive and get annual physicals and tip for good service. Some adults take on the added burden of caring for a tiny human being with no language skills or bladder control. Parenthood can be very rewarding, but let’s face it, so are margaritas at the adults-only pool.

I Can Barely Take Care of Myself is a beacon of hilarious hope for anyone whose major life decisions have been questioned by friends, family, and strangers in a comedy club bathroom. And it should satisfy everyone who wonders if Jen will ever know true love without looking into the eyes of her child.