By Ken Jennings
Author of Because I Said So!
“Don’t touch your Halloween candy until we get it checked out! There’s always some sicko out there poisoning random trick-or-treaters.”

The bogeymen of contemporary Halloween celebrations aren’t ghosts and vampires and cackling witches, unfortunately. Instead, kids are spooked by a series of much more prosaic stories: “The Strychnine in the M&M’s!” or “The Razor Blade in the Candy Apple!” or “The Pedophile Who Groped the Trick-or-Treater!” My childhood Halloweens came right on the heels of the infamous Tylenol-tampering scare of 1982, when poisoned consumer products were on everybody’s mind. As a result, I never got to eat a single piece of Halloween candy until Mom and Dad had gone over the whole bag, looking for needle marks and razor blades and other imagined Vietcong booby traps. (And, I realize now in hindsight, stealing all the Snickers.)

My parents weren’t the only ones. Since this hysteria reached its height in the 1980s and 1990s, many hospitals, fire stations, and police stations have begun examining and X-raying candy for nervous parents. The National Confectioners Association (a.k.a. “Big Candy”) began an annual hotline to field reports of tainted treats. It’s become common knowledge that these threats exist—that they’re widespread, even!

But in reality, here are some things that are more widespread than Halloween poisonings:

• Death by elephant stampede
• Octuplets
• Being hit by a meteorite

That’s because there hasn’t been a single reported case of a Mad Halloween Poisoner in history. Sure, newspapers have been whipping up Halloween hysteria since the late 1950s, but read one of these scare pieces with a more critical eye, and you’ll get giggles, not chills. A typical AP attempt from 1982 breathlessly warns parents that some Mount Holly, New Jersey, residents recently reported a burning sensation after eating a Reese’s peanut butter cup! Not to mention the discount store in Germantown, Tennessee, that called the cops when a syringe was found “near a Halloween candy display”! (Really, let’s be honest. How many Tennessee dollar stores don’t have a used needle lying around in one aisle or another?)

Fresno sociology professor Joel Best has made a career out of debunking Halloween hype. He made a list of seventy-two poisoning cases reported by the media since 1958 and methodically followed up on each one. Not one turned out to be the work of a mythical mad poisoner. Best did find two tragic deaths of children related to Halloween candy, but in each case, the responsible party had used the urban legend to camouflage a very different crime (in one case, a Texas father who killed his son for insurance money, and in the other, a Detroit family trying to cover up an accidental overdose from Uncle Henry’s heroin stash). In other words, there have been two more fake candy deaths in Halloween history than real ones! In many, many more cases, a child became ill or died from some totally unrelated cause around Halloween, leading to panic, unnecessary product recalls, and even police confiscation of trick-or-treat bags.

Best also found about the same number of cases reporting pins and other sharp objects in candy. In virtually every case, these turned out to be hoaxes or pranks or both. (I call them “proaxes”!) The typical scenario was a child who’d been raised on these scare stories claiming to have found a sharp object in an apple or candy bar in order to spook family members.

The modern version of the Halloween Maniac myth, the neighborhood pedophile, is just as overhyped. In recent years, many counties have become so worried about trick-or-treaters that they’ve imposed an October 31 house arrest on sex offenders or forced them to spend the evening at a parole office. But in 2009, South Carolina psychology professor Elizabeth Letourneau published a paper called “How Safe Are Trick-or-Treaters? An Analysis of Child Sex Crime Rates on Halloween.” Letourneau and three collaborators had studied over sixty-seven thousand sex crimes and found that, even before counties cracked down, Halloween had long been one of the safest nights of the year from sexual abuse, perhaps because so many children are involved in group and family activities. “These findings raise questions about the wisdom of diverting law-enforcement resources to attend to a problem that does not appear to exist,” they wrote.

So this is what it’s come to: a world where most of my kids’ friends attend a local “trunk-or-treat” in a church parking lot instead of going door-to-door. (Trunk-or-treating, for those who don’t know, is just like trick-or-treating, except with cars instead of houses, lame decorations instead of awesome ones, and no fun instead of fun.) And all because of a bunch of stuff that never actually happened. When I was a kid, we knew who the real Halloween menaces were: the dentist on the next block who gave out toothbrushes instead of candy, and anyone who gave out candy corn or (bleargh!) circus peanuts. We knew that nobody would ever actually poison circus peanuts. What would be the point? How could you make them worse than they already are? 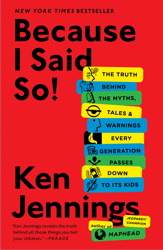 Because I Said So!
by Ken Jennings

Is any of it true? If so, how true? Ken Jennings wants to find out if parents always know best. Yes, all those years you were told not to sit too close to the television or swallow your gum or crack your knuckles are called into question by our country’s leading trivia guru. Jennings separates myth from fact to debunk a wide variety of parental edicts: no swimming after meals, sit up straight, don’t talk to strangers, and so on. Armed with medical case histories, scientific findings, and even the occasional experiment on himself (or his kids), Jennings exposes countless examples of parental wisdom run amok. Whether you’re a parent plagued by needless concern or a kid (of any age) looking to say, “I told you so,” this is the anti– helicopter parenting book you’ve been waiting for.