He thinks he’s doing his part, but she disagrees. Sound familiar? In Family Whispering, we discuss how and why gender plays into the disparity of responsibility at home.

“I can’t believe she’s having the same kind of arguments I had with her father,” says a sixty-five-year-old woman, reflecting on her adult daughter’s complaints about how little her husband does around the house. “Has nothing changed?”

Actually, things have changed. Recent studies in which couples are asked to keep diaries of how they spend their time suggest that the “gender gap” at home has narrowed considerably. When both partners work, women log in only twenty minutes a day more paid and unpaid work than their partners.

And yet women feel as if they’re doing much more. One reason for the disparity, says journalist Ruth Davis Konigsberg, is the mental energy women spend. “Time diaries don’t take into account the stress [of ] keeping that precisely calibrated family schedule in their heads at all times or knowing what’s for dinner, what ingredients are required and their exact location in the refrigerator.”

Another reason is that sexist images and messages seep into our households and continue to promote outdated attitudes about gender roles. Most of us know better, but culture is a powerful and pervasive force. That’s probably why the YouTube video of four-year-old Riley hit a nerve. As we go to press, more than four million people have tuned in to hear her indignant rant about the fact that girls are expected to buy princesses and “pink stuff ” while boys get to buy superheroes.

You can hear Riley’s father in the background, which led some to wonder whether the pint-sized feminist was coached. She wasn’t. We tracked down her mom, thirty-three-year-old Sarah Madia. She is a lawyer, and her husband, Dennis Barry, is in school, studying special ed. The two share responsibilities based, for the most part, on each one’s availability. “He has a more flexible schedule,” Sarah explains “To tell the truth, he does more of the jobs my mother did.” At school and in the toy store (where the video was shot), even a four-year-old can see that the world isn’t as gender-neutral as her household.

Yes, males and females have different bodies, brains, and hormones, which influence their physical capabilities and emotional responses. There are well-documented gender differences. But just as temperament—the emotional package we come in with—isn’t destiny, neither is gender. As one family researcher concluded, the “many differences observed in household research do not appear to be biologically inevitable, but socially enforced.”

In other words, we learn to “do” gender because of what we see around us. If in your childhood household, your or your partner’s mother cooked and cleaned while Dad sat in front of the TV, despite your intentions to have an egalitarian family, you might unwittingly slip into similar roles—they’re what you know. It’s also a matter of what you were allowed and encouraged to do as a child. One of you might have done laundry; the other had it done for her. One of you might have grown up with siblings or baby-sat as a teenager; the other rarely spent time with young children. No surprise, then, when you find yourselves at different points on the household and parenting learning curves. 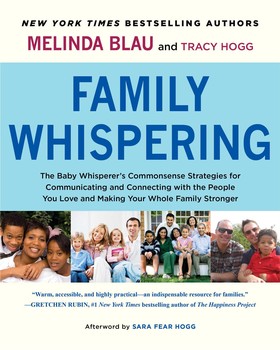 Before her untimely death in 2004, Tracy—aka the Baby Whisperer—and her longtime collaborator, journalist Melinda Blau, conceived a fourth book that would apply the commonsense principles of baby whispering to the “whole family.” This ground-breaking book explains why “family” is defined by much more than the relationship between parent and child. By widening the lens to focus on the family as an entity, Blau uses the Baby Whisperer philosophy to illuminate how the multiple bonds and interactions that unfold within a household of adults and children coalesce to form a larger family dynamic.