When my daughters were little, I was always kidnapping them in my mind. How easy it would be to walk off with someone else’s child, I’d think on a crowded bus or on a sidewalk teeming with tourists. It would take only a moment and a few gummy bears to lure a toddler away from a distracted parent, irrevocably rebooting both of their lives. I was constantly trying to anticipate how a kidnapping might happen, hoping my imagination would act as a prophylactic against it.

I thought this fear was my own, private obsession, but it turns out that abduction is in the Top 10 of what many parents worry about. I learned this by channeling my neurosis into a novel (entitled What Was Mine) and in researching the story, casually asked parents if they ever thought about kidnapping. In almost every case, eyes widened, faces neared, voices animated with the memory of a child gone temporarily missing. Mothers usually ended with “All I could think about was my baby’s face and how would I live the rest of my life without it?” Fathers’ stories ended differently, “All I could think about was my wife’s face when I’d have to tell her…”

My research included reaching out to law-enforcement professionals for procedural details—what exactly happens in the hours after your child is kidnapped?—and I learned a statistic that might have saved me years of worry: only about one percent of kidnappings are carried out by strangers. Children are far more likely to be abducted by someone in their own family, usually a parent denied custody. Statistically, my fear of kidnapping was unfounded. And yet, statistics don’t matter if your child happens to fall into that one percent.

How to protect your child from becoming part of that tiny percentage? The professionals I spoke to recommended these as the most five most effective precautions a parent can take.

1. Give your child a code word
Find a simple word, something easy to remember, like “gorilla” or “jellybean.” Tell your child to trust only an adult who knows the word. Children are usually kidnapped in cars, often by a person who says they’ve been sent by the child’s parents. This jived with a story I’d heard about a girl in Florida, an heir to a pasta fortune. She was kidnapped at age nine, after being told at school that her parents couldn’t pick her up and that a private car would be sent for her. The car drove her to a cabin in deep woods. Luckily for her, as for 94 percent of abducted children, she was found unharmed within days; she’d passed the time by doing her homework. But a code word might have prevented her from climbing blithely into that car.

2. Don’t put your child’s name on a backpack or clothing
Don’t make it easy for potential abductor to call to your child by name. Children tend to trust people who know their names.

3. Tell your child that kidnappers look like regular people
Dispel childish assumptions that kidnappers look like monsters. Teach them to beware of strangers asking for help. Children shouldn’t speak to adults they don’t know. Tell them that if adults need help finding a lost pet or directions to someone’s house, they shouldn’t be asking a child for it; they should be asking other adults.

4. Tell children that being safe is more important than being polite
Advise your child that if a stranger approaches and something doesn’t feel right, they should just walk away. Teach children it’s OK to trust the “uh oh” voice inside them. Sometimes this voice might make a mistake and warn them off harmless adults who only mean to be friendly, but safety is more important than courtesy.

5. Children in trouble shouldn’t just scream, they should use their words
Reassure your child that it’s extremely unlikely that a stranger would try to take him or her, but add that if it ever happens, they should yell as loud as they can, calling out something specific like “Help! This man is not my dad!” Otherwise, people may mistake a screaming child for a kid just having tantrum.

Happily, my children grew up un-kidnapped and are now in their twenties. My fear of their being abducted has been supplanted by other anxieties for them—which I am dealing with by channeling into new pieces of fiction. 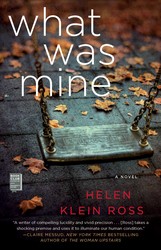 What Was Mine
by Helen Klein Ross

Simply told but deeply affecting, in the bestselling tradition of Alice McDermott and Tom Perrotta, this urgent novel unravels the heartrending yet unsentimental tale of a woman who kidnaps a baby in a superstore—and gets away with it for 21 years. Lucy Wakefield is a seemingly ordinary woman who does something extraordinary in a desperate moment: she takes a baby girl from a shopping cart and raises her as her own. It’s a secret she manages to keep for over two decades—from her daughter, the babysitter who helped raise her, family, coworkers, and friends. When Lucy’s now-grown daughter Mia discovers the devastating truth of her origins, she is overwhelmed by confusion and anger and determines not to speak again to the mother who raised her. She reaches out to her birth mother for a tearful reunion, and Lucy is forced to flee to China to avoid prosecution. What follows is a ripple effect that alters the lives of many and challenges our understanding of the very meaning of motherhood.