For new mothers, finding community is crucial. As beautiful and delicious as new babies may be, many women feel alienated in those early days (weeks, months) of parenthood. Longstanding ties to professional identities and friendships with non-parents are put “on hold,” and navigating the world with a little bundle of baby always in tow can be confusing.

Traditionally, women had the built-in support network of mothers, sisters, or lifelong friends who lived nearby. As more women choose to delay motherhood until later in their lives and careers, or live away from their families and hometowns, that traditional support has become less common. This is why finding, creating, or joining a mommy group is crucial.

A good mommy group will help you figure out if your baby is colicky (or just messing with you) and what that weird stain on your leggings might be. They’ll also recommend the lightest breast pump for commuting, and which stroller is best for icy sidewalks versus throwing in the back of the car. Most of all, though, a great mommy group will offer support, friendship, a cold glass of white wine at 2pm, and a comforting text back at 2am.

I found my mommy group by answering a posting on my local parenting listserv. The seven women saved me. Actually, that’s not true: We saved each other, laughing and crying all the way home.

Here is a beginner’s–even a shy beginner’s–guide to starting a group of like-minded mamas.

Start when you’re pregnant, if possible. When my group and I met for the first time, I was 20 weeks pregnant. The other women were a little further along (my daughter Clara is the youngest of the group’s babies). Getting to know each other before our lives turned upside down meant that we met as people first, before we were Official Mothers. This was especially important when we were at our most sleep-deprived and unreliable in that “fourth trimester” of our babies’ first three months. We might plan a coffee shop rendezvous for noon, but then would straggle in an hour late, stressed out. If we hadn’t already known that we were all otherwise competent, considerate, compassionate women, we might not have trusted that the group was working.

Another reason to start building community pre-Bébé: the last few months of pregnancy are not… delightful. There are all sort of weird aches and pains, fears, and anxieties. The mommies in my group were pregnant through the hottest summer on record in New York. Knowing we were not the only rashy and dehydrated pregnant ladies in the world was enormously comforting (and at that point, we were enormous). Plus nothing tastes better than an iced latte when its 96 degrees and you’re drinking with a friend who also feels like a manatee.

Don’t worry about what you may have in common other than the babies. Unless you want to.

Seriously, you don’t need to have the same professions, politics, socio-economic or marital statuses, race, or sexuality to befriend other mamas. My group started with the commonalities of babies in our bellies and about a mile radius between our apartments. My husband compared it to freshman year, when you might meet your best friend that first weekend of orientation, and still be roomies in your twenties. We were all starting new together; our lack of previous attachment to each other was freeing.

However, if the group you want to start is based on a professional, spiritual, or cultural commonality, go for it! Social media—whether Facebook, meetup.com, or a local parenting listserv—is also a great way to find or start a group. One of the strongest groups I visited in the course of writing my book was a Bodyback workout class in Northern California—all they had in common was the desire for rock-hard abs. Also remember: No matter how often you mean to meet, you are more likely to communicate via email, text, or social media. And there is truly nothing like having five people to write to at 3am when your baby just. Won’t. Go. Back. To. Sleep.

Be honest if you want the group to last. For new mothers, there is no such thing as TMI.

One of the biggest complaints I hear from women who have been unsuccessful in finding a mommy group that feels like a fit is, “People weren’t real. I felt like the only one in the room who was having a hard time.”

If you feel as if the women you’ve just met aren’t breaking the ice, do it yourself. Ask hard questions, or just tell them how you’re feeling. Worst-case scenario, you never see these women again, so no big deal. Within my group, enough of us had enough problems—postpartum anxiety or depression, financial worries, developmental delays, even divorce—that none of us felt self-conscious sharing true confessions.

But really, the day-to-day details bonded us before the big stuff even came up. And with a new baby, day-to-day is often… gross. Your engorged breasts will feel like rocks when your milk comes in, and then will squirt like geysers across the room. You’ll want to share the fascinating rainbow-colored contents of your infant’s diapers with all of your friends. And speaking of poop, how about that your own first post-birth effort might rival labor on the pain scale? Let’s not even get started on when you finally try to have sex again (two words: patience and lube). Everyone is thinking the same thing anyway.

What happens in Mommy Group stays in Mommy Group. Ugh, I guess I’m guilty of breaking this last rule, big time, because I wrote a book about my group! But: I did it with their permission, encouragement, and (most important) support. By the time I began to write our story, we were no longer in the throes of early parenthood (the babies in the book are all “big” kindergarteners now). Still, in those early days, feeling as if these were women I could trust with my fears and secrets (why does my C-section scar still hurt? Sometimes my baby looks more like my mother-in-law than I imagined possible. Am I a good mother?) was crucial.

Ultimately, any group is only as strong as its participants. Reach out, support each other, and find the love. You’ll be a better mother for it—and a better version of your post-baby self. 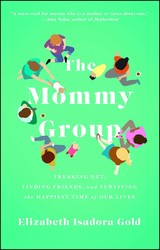 The Mommy Group: Freaking Out, Finding Friends, and Surviving the Happiest Time of Our Lives
by Elizabeth Isadora Gold

In 2010, seven women met in Brooklyn, New York, to form a Mommy Group. Over coffee, croissants, wine, and the occasional baby carrot, they commiserated about typical new-mother issues: difficult births, babies who slept in ten-minute increments, and breast pumps that talked back in the middle of the night. And then things got complicated. A witty, relatable, and honest look at the realities of parenthood today, The Mommy Group is a companion that will help any mom feel understood and empowered, and keep her laughing all the way.