Marriage is not a walk in the park. Even the happiest and most committed couples have their doubts from time to time. It’s important to remember that marriage is ultimately a choice. We have the choice to stay or go. Winifred M. Reilly, author of IT TAKES ONE TO TANGO, shares the truth when it comes to marriage.

When Joanna and Luke came to see me, they admitted straight out that they were probably doomed. One day, seemingly out of the blue, Luke had woken up and announced to Joanna that he was no longer in love. There they were, ten years into marriage, with three children in preschool, Joanna working very, very part-time as a copywriter and Luke working seventy-hour weeks at a start-up. Life was hectic, they said, with work, the kids, socks and shoes and toys everywhere. All the little annoyances, Joanna’s petty criticisms couched as suggestions, the way her voice rose at the ends of her sentences, Luke’s never-ending succession of outlandish ideas—Let’s go live on a houseboat, let’s live off the grid in Alaska, how about we start an ice cream shop after the company IPOs?—were doubly annoying since there wasn’t enough good stuff to balance them out. Then Luke “drove the final nail into the coffin,” as Joanna saw it, telling her he loved her but was no longer in love.

Joanna’s friends were sharply divided, a few telling her to just see what happened, to take it slow, while others started sending her the names of divorce mediators, saying that if Luke didn’t love her, there wasn’t much she could do. “There are plenty of guys out there who would think you’re a great catch,” one friend said by way of encouragement. Another advised, “Don’t sit around waiting for crumbs.”

Then there was Luke’s therapist opining that “maybe Joanna just isn’t the woman for you,” as if Luke had been deciding whether he and Joanna should or shouldn’t go on a third date. But Joanna still loved Luke and wasn’t ready to leave, and all the conflicting advice was only making matters worse.

By the time they showed up in my office, Luke had begun to rethink his pronouncement about not being in love. Maybe he’d overstated his feelings. Maybe things weren’t that bad. Not that he’d begun to see shooting stars when Joanna walked into the room, but maybe his “I’m not in love” comment was his way of saying that there were problems in the marriage and he’d been too busy to notice his unhappiness until it was all that he felt.

“How far is too far gone?” they asked, saying that it seemed to them that staying married when you’re not really happy had gone out of vogue. How happy is happy enough to stay?

As I began to take in Jim’s message about how distressed we can become when we expect marriage to be one blissful day leading into the next, I thought about the books I had read (and had been discouraged by) early on in my marriage, the ones with the pictures of smiling couples on the cover, the ones promising to turn all your conflicts into joyful opportunities. Those books were perpetuating a dangerous myth, setting so high and unrealistic a bar that it made struggling couples want to give up.

Then I thought about my comparatively sober message to clients about the bumpy road of marriage, about the need to tolerate frustration and disappointment, about the need to take bold steps on their own if they wanted to grow (the very message I gave Joanna and Luke, assuring them that the problems in their marriage were hardly cause to give up).

With all that, I already felt as though I were telling my clients that there isn’t a tooth fairy.

Now I would have to go one step further, deliver one more piece of bad news: I would have to tell them that some of their most frustrating struggles would never resolve. I would have to say that in order to grow, they’d need to find a way to accept this, to let go of believing that it can be otherwise. To trust that letting go will open doors to a better marriage rather than close them.

How could I say this to someone hopeless and desperate, intractably stuck in a miserable marriage, barely hanging on to the end of her rope? I thought of my client whose wife had only two volumes: yelling loud enough for the neighbors to hear or saying nothing at all. And of the woman whose husband drank vodka from a travel mug as he drove home from work.

What should I tell them?

Eventually I realized that I would have to tell them the truth.

If I had any hope at all of helping my clients, no matter how dire their troubles, I had to remind them that marriage is a choice. We can stay with our partner, or we can leave. If we stay, we have to figure out how to navigate the difficult waters of our marriage. We have to stop protesting the nature of whatever dilemma we face. We have to find a way to have staying be a choice we make wholeheartedly—a choice we make without compromising the self we’ve worked so hard to strengthen. 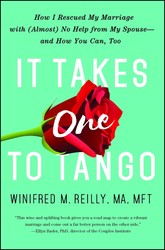 It Takes One to Tango
by Winifred M. Reilly

With a focus on self-empowerment and resilience, this refreshing and witty relationship guide has a reassuring counterintuitive message for unhappy spouses: you only need one partner to initiate far-reaching positive change in a marriage.Conventional wisdom says that “it takes two” to turn a troubled marriage around and that both partners must have a shared commitment to change. So when couples can’t agree on how—or whether—to make their marriage better, many give up or settle for a less-than-satisfying marriage (or think the only way out is divorce). Fortunately, there is an alternative. “What distinguishes Reilly’s book is that she says a warring couple don’t have to agree on the goal of staying together; it takes one person changing, not both, to make a marriage work” (The New York Times). Marriage and family therapist Winifred Reilly has this message for struggling partners: Take the lead. Doing so is effective—and powerful. Through Reilly’s own story of reclaiming her now nearly forty-year marriage, along with anecdotes from many clients she’s worked with, you’ll learn how to: -Focus on your own behaviors and change them in ways that make you feel good about yourself and your marriage -Take a firm stand for what truly matters to you without arguing, cajoling, or resorting to threats -Identify the “big picture” issues at the basis of your repetitive fights—and learn how to unhook from them -Be less reactive, especially in the face of your spouse’s provocations -Develop the strength and stamina to be the sole agent of change Combining psychological theory, practical advice, and personal narrative, It Takes One to Tango is a “wise and uplifting” (Dr. Ellyn Bader, Director of The Couples Institute) guide that will empower those who choose to take a bold, proactive approach to creating a loving and lasting marriage.