When you have little ones at home, even a trip to the grocery store–alone–can seem like a hot night out. Here’s why couples will fare better during the stressful baby-raising years if they maturely arrange “trade-offs.” From The 6 Husbands Every Wife Should Have: How Couples Who Change Together Stay Together.

Children are adorable, but they’re still frustrating and a ton of work. That often leaves whoever is home dealing with them feeling burdened while the other is out playing, working, or even doing the grocery shopping. Many people go into the baby years insisting they won’t keep score and that “we’re in this together.” To that I say, good luck. You’d be better off if you realized that bartering will occur and you will keep score. But don’t see that as a bad thing or as a sign of selfishness. People keep score; it’s simply human nature. It only becomes a problem when people don’t talk about their feelings when they feel the situation is unfair, or when the scorecard is skewed too far in one person’s favor. I want you to have the best parenting experience you can, and in order to do that, you can’t live with blinders on. Scorekeeping and bartering are part of life and relationships. Just do it in a mature and healthy manner.

To an overwhelmed parent, just being in the store with no kids tugging at you can feel like a break. Many husbands don’t realize that while going to the store for your wife is helpful, it often doesn’t score as many points as staying home with the kids and letting her go to the grocery store. Then again, sometimes your wife will want you to do the shopping.

While one spouse is absent, the on-duty spouse usually looks forward to his or her break time and expects to cash in that chip relatively soon. I call these trade-offs. Couples need to discuss exactly what their expectations are regarding break times and what’s considered a break and what isn’t (remember the grocery store example—sometimes it’s a break; other times it’s a chore).

Understanding this is very important. I know many couples where the wife considers her husband’s work hours to be break time, whereas he considers them to be on-duty hours. Equally, I know many husbands who consider their wife’s caretaking hours as break time, which conveniently allows them to assert that they need some break time, too—like a weekend in Vegas with the guys. So make sure you define trade-offs and discuss your expectations. Those who do this honestly and openly fare far better than those who secretly keep score and deny they’re doing it. 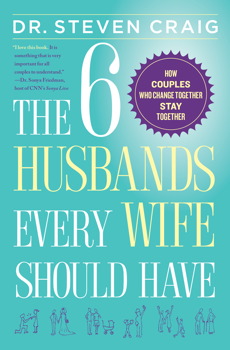 The 6 Husbands Every Wife Should Have: How Couples Who Change Together Stay Together
by Dr. Steven Craig

The 6 Husbands Every Wife Should Have will revitalize readers’ notions of marriage and turn it into an ongoing activity that husband and wife can conquer actively—together.