Shopping online for a new man? Don’t get too visual! Learn great been-there-done-that advice. From It’s Hard to Fight Naked.

1. Skip the photos at first. At the beginning of your search, try to jump right into reading profiles without going through all of their pictures. Don’t worry, you’ll eventually get to see how the guys look, but you should be reading profiles without any preconceived notions about looks. This way, you won’t eliminate an otherwise great catch who may not look like someone you’d typically date—and you won’t cut any cuties too much slack for things in their profiles that will ultimately turn you off.

2. Trust your instincts. We can only do so much about our looks, but we have a lot of control over what we write. If someone sounds a certain way on the page, chances are he’s going to come off that way and then some in person. Does he seem arrogant? Nerdy? Shy? Boring? If any of these are no-go’s for you, you may need to move along. He’s read what he’s written several times, and whether or not he’s a good writer, he’s probably confident with the version of himself that he’s tried to put out there. If something sticks out as unappealing to you, it probably won’t be less apparent when you meet him.

3. Look for inconsistencies. Once you’ve found guys whose profiles pique your interest, you can look at the photos. The background of his photos will almost always confirm whether he’s telling the truth in his profile. If he says he loves to travel and all of his photos look as if they were taken in his apartment, we may have a problem, Houston. If he says he’s social but only has self-portraits taken in the bathroom mirror, you gotta wonder why he couldn’t find even one friend to take his picture. If he says he has a great career, or that work is important to him, but he’s rocking jean shorts and a Giants jersey in every shot, he may not be the
mogul-in-training that he claims to be.

4. Get on the phone. First face-to-face dates can be a major waste of time and a good outfit. Why spend time getting your hair right and your hard-earned money on first-date Spanx and the price of gas traipsing across town only to learn within five minutes of meeting a guy that you’d rather be in line at the DMV? Get your sweatpants on, put a scarf on your head, pour yourself a glass of chardonnay, and have a phone date first. It’s not foolproof, but if you’ve had a good phoner first, the chances of the wheels popping off the bus are far less likely than when going into a date cold. (And texting doesn’t count—if you think I’m funny, I need to hear your laugh, not see your emoticon.) 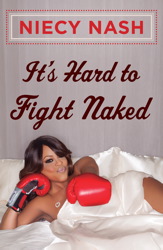 In this hilarious, heartfelt book of no-nonsense dating and relationship wisdom, Niecy tells it like it is. What she has to say might not always be popular with your girlfriends. Your perseverance will be tested. But in the end you will find out how to keep yourself happy and your man coming back for more!