During the promo stomp for Sweet Filthy Boy, we talk to a lot of readers about the adventure Mia has in the novel: leaving home and heading to Paris for a summer of wandering and romance and, of course, artisanal bread products. Most conversations go like this: “That is one of my favorite fantasies!” followed by “Alas, I’ve never been to Europe.”

We’re pretty sure there is no woman or man alive on the planet who needs convincing that Europe’s summer fling game is on point, so why aren’t more people in their twenties heading over there and having the adventure of a lifetime? Yes, it’s pricey and we’re all broke until we’re 40. Yes, it’s far away and for many of us, once we graduate college penniless, the likeliest long-distance excursion will be to grandma’s cabin in Kennebunkport, Maine, or Royston, Georgia. The thing is, most European cities are so accessible it takes only an afternoon to get your bearings and wander. Stop buying disposable clothes on your chain store credit cards, save your monies, and head to the City of Love.

The food is unreal. Enormous, manicured parks are everywhere—and everyone uses them. They’re full of people kissing (we looked, no shame), and kids running and women wearing scarves in very complicated ways that we’re pretty sure we couldn’t recreate. The Metro will take you anywhere you want to go, and it’s simple—we swear!

And then there are the men. How do we say this delicately? They’re goddamn delicious. Sweet lord, even the homely ones (to be fair, we think there are maybe two homely people in France). Well dressed, fit, and trained from birth to give women that look that makes us feel as though we’ve just flashed our underwear? Bring it. Why do you think so many American celebrities head over to Europe for some summer fun? Johnny Depp? Halle Berry? Kate Hudson? (Let’s not mention Gwyneth). Jessica Lange. (Well, Mikhail Baryshnikov was Russian, but let’s include him because phroar.)

Imagine this: You’re at dinner with your European stranger (the two of you met while you were consulting your enormous map on the metro and he offered skip work to show you around for the day*). In his edible accent, he’s explained the differences between Bordeaux, Bourgogne, and Beaujolais, and has watched you lick your lips after you’ve tasted a wine from each region (your favorite is Bourgogne, but you won’t tell him that because he’s from Bordeaux and this seems to be a very big deal, akin to not telling your Penn State husband that you accidentally cheered for Notre Dame last week against a Big Ten school).

After paying roughly the same amount for dinner that you spent on books your last semester in college, you walk the streets of Paris, hand in hand. He’s telling you stories about nearly every street you turn down: history was made on these streets. Paintings laid to canvas, famous meals crafted, classic books written. Wars were fought here, and the greatest love stories on earth may have begun right where you’re standing.

All around you are buildings that are so beautiful it nearly takes your breath away. How is it possible for a city to get better with every passing hour? Dawn was amazing, with the sun reflecting off the buildings overlooking the Seine. Dusk at the Eiffel Tower was nearly magical. But when it’s dark? With the lights of Notre Dame—the Notre Dame you’re allowed to love—bright and so beautiful you take five hundred pictures of the front of the cathedral on your iPhone? You’re so overwhelmed, you’re not entirely sure you’ll make it back to the hotel.

But you do. Because what happens between the sheets in Paris is not to be missed. Details, you ask? Well, I guess you’ll just have to read the book to find that out.

*If you can actually get a man to do this, we will send you BACK to Paris because clearly you belong in the world of Strong Pick-up Game. 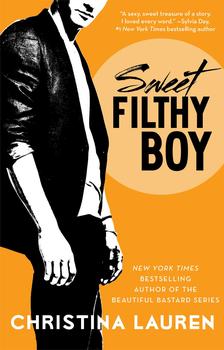 The New York Times bestselling author of Beautiful Bastard, Beautiful Stranger, and Beautiful Player starts a brand new story of friends, love, and lust with Book One of the Wild Seasons series.