Let’s admit it: We’ve all imagined having an office romance. However, once your fantasy become a reality, it’s a whole new ballpark. There are certain expectations and boundaries that need to be navigated (especially when the annual company holiday party’s right around the corner). So before you make your move, discover 7 unofficial rules for dating a coworker in this special selection from the book WHEN’S HAPPY HOUR? by the Betches.

If you can’t resist dating someone at work, we’re going to give you the nine unofficial rules for dating a coworker without having to burn your office to the ground.

Hang out outside the office as friends to see if his personality outside of work is just as good as his office personality. Maybe Eric’s hyperorganized ambitious tendencies are sexy in sales meetings but not sexy when he screams at you for spilling wine on his couch.

Don’t start posting Instagram stories of your date nights and sending email blasts about how you and Matt are hooking up. This will not only be embarrassing when things fall apart, but it’s important to remember that no one really gives a shit about your relationship unless it concerns them. Since in this stage, this is probably not an established “thing” yet, be cool.

Your employee handbook should have some shit in it about office romances, the company policies about disclosing them, and if it’s even allowed. Also, read the room. If there are a lot of people who hook up with each other at your job, it’s probably more socially acceptable than if the last time anyone got laid in your office was before you were born.

Make sure the person you’re dating isn’t your direct superior or report. If it is, there’s a ton of potential legal issues and anything you say or don’t say could be taken as someone being given preferential treatment because you’re sleeping with them. This could open you up to a lawsuit and/or general weirdness. Example: During that Friends episode when Rachel tells everyone her assistant Tag, who is unqualified, is gay so that she can continue to keep him as a viable dating option for herself. Highly inappropriate, Rachel!

#5. Decide together when to disclose your relationship.

Don’t go telling anyone at work (especially your respective bosses) about the fact that you’re dating without talking to him first. If you guys really have something that you want to pursue, talk to him about when you’re going to tell people and make a game plan in case things don’t work out. It goes without saying that you shouldn’t be making out in the supply closet, but go above and beyond this obvious rule by creating an extra amount of distance between the two of you at work. No need to suggest to your manager that you two partner on something work-related and make shit even more complicated than it has to be.

Don’t make anyone at work feel uncomfortable by talking about your amazing sex or the next trip you guys have planned. Don’t email a picture of your boyfriend half naked at Sandals Jamaica to your office Slack channel. Don’t tell people about your relationship problems. Not only will everyone find you annoying, this will create a shit ton of office gossip that will be very entertaining for everyone else while very awkward and embarrassing for you. See rule number two, no one gives a shit.

Do not take this year’s budget meeting as an excuse to call Matt out on the fact that he cheaped out on your birthday gift. This isn’t Vanderpump Rules, and you’re not being paid to start drama at work. The best way to not let dating someone at work interfere with your work is to act as though you’re not dating this person at work. So complete your tasks and don’t spend work hours googling tantric sex classes for the two of you or messaging him on Slack about your mom’s birthday brunch.

But wait! There’s more! For all 9 office romance tips, pick up a copy of WHEN’S HAPPY HOUR? by the Betches!

And don’t miss this career advice from The Betches: Update Your Resume for 2019 Like the Boss You Are

Excerpted from When’s Happy Hour? by The Betches. Copyright © 2018 by author. Used by permission of the publisher. All rights reserved.

Photo by Ben White on Unsplash. 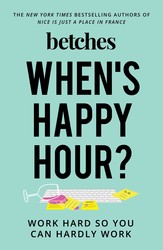 When’s Happy Hour?
by The Betches

We get it. You run shit. You can go from being blackout at drunk brunch to being ready to meet your new boyfriend’s parents in two seconds. But how do you go from being the boss of your personal life to taking charge of your career? That’s where the Betches come in. We are dedicated to making you the most successful, betchiest career woman you can be. After all, we only became Betches after we worked like, really hard. And now we’re confident enough to help you become the best. So whether you’re trying to become a CEO, navigate an office hookup, or just save enough money to go to happy hour twice a week, we’re here to help. It’s time to channel your inner Elle Woods, Miranda Priestly, and Ruth Bader Ginsburg. Per our last email, you better read this.