New York City has been the backdrop for countless romantic scenes in movies and TV…but where do you find romance when you’re more pavement than penthouse? Bestselling author Christina Lauren’s new book, ROOMIES, is a love story between a starving musician and a broke stagehand, so they had to get creative with their date ideas.

We’ve done more than our share of books set in New York City . . . and there are some damn good reasons we’ve had our heroes like Will and Max running around from midtown to Soho. From the skyline, to the art and culture, to the history and energy, New York has a surprise for you around every corner. There are a million things to do, even with very little pocket change (yes Virginia, cheap New York activities do exist). So grab your Metrocard and get rid of the old Netflix and Chill, cause we’re sharing with you some of our favorite cheap date spots in one of our favorite cities in the world!

You might recognize this theater from the Tom Hanks and Meg Ryan movie You’ve Got Mail. In fact, the premiere was held in the very same theater where that scene was filmed. Originally opened in 1994, AMC Loews Lincoln Square looks like a modern version of an old Hollywood cinema. It has a mural-adorned lobby, complete with images from Lawrence of Arabia, It Happened one Night, and other Sony classics (bonus date points if you can spot the embedded names of Sony/Lowes executives hidden throughout), an art deco-inspired box office, terrazzo floors with embedded brass stars, floor to ceiling columns disguised as palm trees, and an entryway leading to one of the original 9 auditoriums that resemble the gates of the Sony Picture studio lot.
A movie might not seem like much of a bargain, but head to a showing before dinner and you can get in for the price of a matinee.

You might think that parks are just for picnics and strolling around—which are both awesome and free—but Central Park has about a million and one things you can do, for little or no money.
For $15 you can paddle around the lake for one hour, or let someone else do the work à la gondola for a little more. For $12 you can hold hands exploring the Central Park Zoo, getting up close with sea lions and grizzly bears and a host of other animals. You can check out the Alice in Wonderland statues, ice skate in the winter, ride the Friedsam Memorial Carousel, or walk a block and grab a Shack Burger at the Shake Shack.

Is there any first date better than miniature golf? You’re surrounded by other people, enjoying the great outdoors, and already have a club in your hand if things go downhill. Pier 25 is a whopping $6 per person and has 18 holes and 13,000 square feet of playing space. It sports a waterfall, footbridges, traditional sand traps, and even a cave if things go well . . . and you want to sneak away for a kiss.

If you’re not a New Yorker—or even if you are—you can’t miss a sunset cruise along the East River. With views of the Manhattan skyline, Brooklyn Bridge and the Statue of Liberty, this romance scene practically writes itself. And for an average ticket price of around $16 a person (varies depending on day), we’ll take two, please.

For more travel advice from Christina Lauren, check out their advice for having a summer fling in Europe! 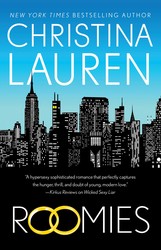 From subway to Broadway to happily ever after. Modern love in all its thrill, hilarity, and uncertainty has never been so compulsively readable as in New York Times and #1 international bestselling author Christina Lauren’s (Beautiful Bastard, Dating You / Hating You) new romance.Marriages of convenience are so...inconvenient. For months Holland Bakker has invented excuses to descend into the subway station near her apartment, drawn to the captivating music performed by her street musician crush. Lacking the nerve to actually talk to the gorgeous stranger, fate steps in one night in the form of a drunken attacker. Calvin Mcloughlin rescues her, but quickly disappears when the police start asking questions. Using the only resource she has to pay the brilliant musician back, Holland gets Calvin an audition with her uncle, Broadway’s hottest musical director. When the tryout goes better than even Holland could have imagined, Calvin is set for a great entry into Broadway—until his reason for disappearing earlier becomes clear: he’s in the country illegally, his student visa having expired years ago. Seeing that her uncle needs Calvin as much as Calvin needs him, a wild idea takes hold of her. Impulsively, she marries the Irishman, her infatuation a secret only to him. As their relationship evolves and Calvin becomes the darling of Broadway—in the middle of the theatrics and the acting-not-acting—will Holland and Calvin to realize that they both stopped pretending a long time ago?