I can remember exactly one time growing up that my father spoke candidly to me about his experiences in Vietnam. We had traveled together, alone, so that I could interview at Philips Academy Andover. Over dinner, he suddenly began to tell me about serving aboard a mine sweeper and navigating the Vietnamese waters. I soaked up every word like a sponge, afraid to even breathe, because I was sure that if I disturbed him he would change the subject and never share with me again. Even at 14, I loved history.

My parents had taken us to the Vietnam Veterans Memorial years earlier, and my siblings and I watched silently as my father walked the wall in search of a friend’s name. We observed respectfully, but never asked a question. We believed, as many did and still do, that prying about a service member’s combat experiences was tasteless and maybe even offensive. My maternal grandfather was a Marine in Vietnam, but I know very little about his experiences there, because I have never asked. I know the bits and pieces that have trickled through the family over the years and become like urban legends: the patrol my grandfather didn’t go on that was ambushed, his replacement whose Jeep hit a mine. “It’s impolite to ask someone who’s been to war whether they killed anyone,” I was told. When I was little, the nation’s wounds caused by Vietnam were still raw. The adults in my life could remember the awful things that had happened to returning service members. I think my parents’ generation’s approach became to remain silent out of respect. They believed veterans needed space and wished to allow it.

When I met my husband, Kevin, questions weren’t an issue at first. We met in the summer of 2007, a year after his deployment to Ramadi during some of the worst fighting of the Iraq War. He talked frequently about Marc Lee, his friend who was killed there, but in those early days of our relationship we were consumed by the trivial happenings of a budding romance. I neither avoided nor approached his combat experiences.

Kevin is not one to move slowly, however, and inside of three weeks after we met, I had moved from Jacksonville to San Diego and into the small room he rented in Imperial Beach. I soon learned that the rules I was raised with don’t apply to him. “What is that?” I asked him about a jar in his room. It was full of spent brass.

He picked it up nonchalantly and cradled it in his right hand. “They’re from my kills,” he said matter-of-factly. He looked me in the eye, maybe waiting for a reaction, but I just nodded and waited. He rifled through the shells slowly, as if searching them for memories. “I shot this one guy in the spine,” he continued. “He didn’t die right away. But he kinda flopped around like a fish.”

That conversation was nine years ago. For the next seven, I gathered pieces of information through Kevin’s odd stories and my sporadic timid questions. On the occasion I broke tradition enough to ask him about his job, I was struck by how effortlessly he shifted from talking about things like the Patriots’ chances for the Super Bowl to where he was when he killed his first man. He was reassuringly unaffected, and his ability to share with me without difficulty contradicted the stereotype of the silent, reserved combat veteran engaged in a terrible internal struggle. Kevin has never been one to volunteer information out of nowhere, but nor has he ever met me with a “I don’t want to talk about it,” or “that’s none of your business.” Still, for a long time I couldn’t shake the feeling that indeed it wasn’t any of my business. It was before me. Before us. I asked him simple questions: “What gun did you shoot? What vehicle did you drive? How often did you shower?” Over time, even as my questions gradually became bolder, I never approached feelings. I didn’t believe it was my place.

It wasn’t until beginning to write The Last Punisher, however, that I realized how important this question-asking process is to our marriage. For the first time in nine years I gave myself free reign to ask anything I wanted, because it became my job to ask. I had to get inside Kevin’s head and help our co-writer write Kevin as he felt in 2006. I had to know everything. I had to push hard and be invasive and get into the place I had believed was off-limits. And then I had to dig deeper.

Kevin answered my questions, the same way he has always answered them. I was editing a particularly gut wrenching scene and I turned away from the computer. He was putting away his laundry. “Kevin,” I said. “It just says you started crying. But how were you crying?” I could barely get the words out. The only time I’ve ever seen him cry was when our son was born. He paused for a moment before answering.

“Probably softly sobbing,” he said thoughtfully. I nodded and he continued dumping a handful of socks into his top drawer.

My relationship with my husband has changed markedly during this writing process, because there are no more “off-limits” questions. One of the truths a woman who loves one of these men must accept is that she will never know him completely. There will always be a small part of him reserved just for his brothers. Because I had come to accept that long ago, I believed that asking certain questions was futile. No matter what, I would never gain entry to the other part of him.

I didn’t realize until recently that this exercise in communication, however, was not for me to get to know him better. He didn’t need an opportunity to open up. He has never had trouble talking about his combat experiences or experienced PTS of any kind. The question asking was for me. I was the one who needed to open up to him about the things I wanted to know. For years, I had carried around a burden of refusal: refusal to fully imagine Kevin in that role, refusal to acknowledge the full impact some of his experiences in Ramadi had on him, and refusal to communicate to him my curiosity about the man he was behind the gun. I needed to ask him because a healthy marriage is founded on communication. I need to know my husband, and the war will always be a part of him. To know his war is to know him, and to know him, I have to ask.

I don’t believe the same, “We don’t ask about that” umbrella that I grew up under has any place in a marriage. Kevin truly empowered me to get answers I never understood I needed about things I had told myself I shouldn’t want to know. We went through this process together and crossed a threshold that has made us a much stronger team. There are no more unanswered questions between us and no more shadows in the past. As a result, our bond has grown immeasurably stronger as I more fully understand the man I have pledged my life to. What’s more, I more fully understand myself. 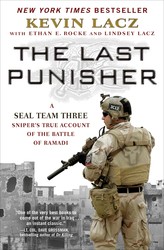 Don’t miss the New York Times bestselling on-the-ground memoir from a Navy SEAL who was part of SEAL Team THREE with American Sniper Chris Kyle. Experience his deployment, from his gripping first mission to his first kill to his eventual successful return to the United States to play himself in the Oscar-nominated film directed by Clint Eastwood and starring Bradley Cooper.The Last Punisher is a bold, no-holds-barred first-person account of the Iraq War. With wry humor and moving testimony, Kevin Lacz tells the story of his tour in Iraq with SEAL Team THREE, the warrior elite of the Navy. This legendary unit, known as “The Punishers,” included Chris Kyle (American Sniper), Mike Monsoor, Ryan Job, and Marc Lee. These brave men were instrumental in securing the key locations in the pivotal 2006 Battle of Ramadi, told with stunning detail in these pages. Minute by minute, Lacz relays the edge-of-your-seat details of his team’s missions in Ramadi, offering a firsthand glimpse into the heated combat, extreme conditions, and harrowing experiences they faced every day. Through it all, Lacz and his teammates formed unbreakable bonds and never lost sight of the cause: protecting America with their fight. The Last Punisher brings the reader into the life and mind of a SEAL, demonstrating the tough realities of war. At the same time, Lacz shares how these experiences made him a better man and how proud he is of his contributions to one of this country’s most difficult military campaigns. Lacz is now an in-demand public speaker testifying to the ability of a veteran to thrive at home. The book includes an afterword on the making of the hit film American Sniper. The Last Punisher is the story of a SEAL who was never afraid to answer the call.