It’s easy to take something your partner says to heart, especially if it throws you off guard. Learn the “common thinking errors” women make and how to combat their negative impact on a relationship, as explained by respected psychologist Linda Papadopoulos in WHAT MEN SAY, WHAT WOMEN HEAR: BRIDGING THE COMMUNICATION GAP ONE CONVERSATION AT A TIME.

1. All-or-nothing thinking. You think in complete extremes. Either he tells me he loves me or our relationship is doomed or If he hasn’t asked me on a second date by Tuesday, I’m never answering his calls again. Now this is all very well and good, but the man in question doesn’t have a copy of your rule book, so he has no idea that this is what you want. Who decided that this was the best criterion by which to judge a relationship? Where did your “rules” come from? He can’t mind-read any more than you can, and thinking in extremes just creates ridiculously high expectations that no one can match. And usually only one person gets hurt by the outcome: you.

2. Maximizing the negatives. You only take notice of the downside of the situation. So what if he’s the love of your life and he’s reliable, handsome, and kind? He was standoffish with your mother last week and didn’t want to go to your great-aunt’s birthday party, so he must hate everyone in your life, and eventually he’ll start to hate you too. The point is, if you are biased to see things in a negative way then you are much more likely to focus on the one negative point while ignoring everything else that would give you a more balanced view of the situation.

3. Making everything about you. You feel responsible for things that have nothing to do with you. He’s in a foul mood, it must be my fault. Clearly he’s lost interest, and he’s trying to push me away so that I’ll back off and eventually finish it. Maybe he’s in a foul mood because a coworker has messed up and now he’ll have to spend the entire weekend sorting it out, when he’d rather be with you. Or perhaps he’s tired and just feeling a bit under the weather. Whatever it is, it’s important that you recognize that his world, his thoughts, and even his feelings may not always revolve around you. And even though it may upset you to see him down, many times the best thing that you can do is just give him the space to speak to you when he is ready and manage your own anxiety by remembering that his life is filled with a million and one things that have the potential to make him happy or sad. You are one of those things but by no means the only one.

4. Jumping to conclusions. You reach inaccurate conclusions based on insufficient or inadequate evidence. He wants us to join a gym, which means he isn’t attracted to me anymore. He thinks I’ve put on weight and let myself go. It’s only a matter of time before he leaves. Men tend to be much more straightforward than women. If he thought that, he would probably tell you. He wants to join a gym because, well, he does. He probably thinks it would be a good, fun way of keeping fit and a way for the two of you to spend more time together. If you immediately jump to conclusions, you never give yourself the chance to make sense of what is really going on. Also if you are going to sit around playing detective, it will eventually get tiresome for your mate. No one wants to be with someone who is constantly trying to unearth his hidden motives.

5. Seeing everything as a catastrophe. You focus on the worst-case scenario and exaggerate the likely consequences. I’ve burned the romantic meal I planned for tonight. Everything’s ruined and the evening will be a disaster. I don’t like the dress I’ve bought either and he probably doesn’t want to come here anyway. Slow down! Stop the spiral of doom in its tracks. Look at the facts. All that’s happened is the chicken might be extra crispy. But the dessert looks fabulous, your hair is just the way you like it, and he is coming to see you, not the food. It all boils down to perspective. The more anxious you feel, the less perspective you are able to get on a situation. Take a minute to step back and really challenge those negative thoughts.

6. Generalizing the negatives. You exaggerate the memory of an unpleasant experience, which then affects other parts of your present life, even if they are entirely unrelated. A throwaway comment from your ex-boyfriend about how he’s not really into blondes turns into My hair looks bad, and if he thinks so, so will every other guy, and I’ll end up dying a lonely old woman who never finds love! Now, you know this isn’t logical or reasonable thinking. Apart from anything else, “not being into blondes” is shallow, which is your ex’s loss. There are millions of men out there with incredibly diverse tastes in women. Stop making huge generalizations about small, meaningless comments. He probably can’t even remember saying it!

Can you see how these thinking errors start to affect your behavior and, in turn, the way you live your life? One woman might sleep with every guy who takes her out for a drink because she’s established a false belief that sex is the only way to make a guy fall in love with her. Another woman might starve herself for a week before every date, because one guy told her she had “womanly curves.” And, in an extreme example, someone may completely avoid dating altogether and close off the option of meeting anyone because she doesn’t believe she deserves to find love. Each sounds ridiculous written down, but we’re all guilty of this behavior in one form or another. With a few tweaks in the way we listen and interpret what we hear, we can radically change our lives for the better.

Common Thinking Errors don’t appear overnight. They develop over years and stay with us, often unchallenged. And once ingrained, they become automatic. You don’t even realize the havoc you are causing to your happiness. If you are going to have any chance of dissolving self-defeating CTEs, you must learn to reprogram those automatic negative thoughts with a more constructive strategy:

Want more? Take your relationship to the next level. 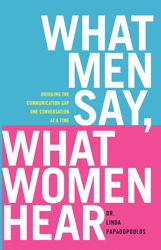 What Men Say, What Women Hear
by Linda Papadopoulos

AN INDISPENSABLE RELATIONSHIP GUIDE FOR EVERY WOMAN WHO HAS EVER TOLD HER PARTNER "REALLY, DON'T GO TO ANY TROUBLE FOR MY BIRTHDAY"...AND THEN BEEN DISAPPOINTED WHEN HE DIDN'T.