Don’t panic, but you’ve just entered into particularly dangerous territory known as “The Heartbreak Zone.” Breakups spike twice a year: around Christmas, and during the period between Valentine’s Day and spring break. (In case, like me, it’s been about a hundred years since you had a spring break, I looked up the dates for you: roughly March 14-28.) So, for the next few weeks, you and bae are on thin ice, at least according to an examination of over 10,000 Facebook relationship statuses by data analyst David McCandless.

OK, so maybe you’re not panicking because you share a lease or have a ring around your finger or your partner is weird and stores the peanut butter in the fridge just like you do (monsters!) and so clearly this person is your lobster for life. Regardless, this is still news you can use, because it’s not so much the fact that breakups peak this time of year as it is the reason why.

The rationale behind the Christmas breakup is that people are suddenly confronted with the pressure to bring a significant other home for the holidays, which can make you reexamine your relationship—am I as serious about this person as I say? But the thinking behind the winter-spring-purgatory-breakup is much more subtle and insidious: boredom.

Collectively, as a nation, we’ve averaged 12 degrees this winter, and may the person who didn’t spend it in sweats, on the couch, bingeing on Netflix and Seamless throw the first stone. But all those nights in can induce a sort of cabin fever, and it’s easy to find yourself stuck in a big ole unsexy rut.

But there’s a simple fix. Well, simple depending how excited you are about Season 3 of House of Cards, and that is to drag yourself off the couch and force your man, woman, or cardboard cutout of Ryan Gosling (all love is equal) to follow your lead. Next, you are going to do something. No, not go out to dinner at your favorite cozy Italian spot. It’s got to be something you’ve never done before. Wait a week, then go out and do something else you’ve never done before again. Repeat until death parts you.

There is a copious body of research to suggest that couples who inject novelty into their relationships by seeking new and exciting experiences together are happier and more committed than couples who rely on a routine. Branching out and learning a skill, like a foreign language, attempting a challenging sport, like snowboarding, or even just something as simple as tasting an exotic cuisine has been shown to release dopamine, which gives us a surge of pleasure, and oxytocin, otherwise known as the “love hormone,” which promotes intimacy, trust, and even fidelity. These are things that benefit all couples, both the newbies and the seasoned vets.

Now off to follow my own advice! But first, just one more episode of House of Cards… 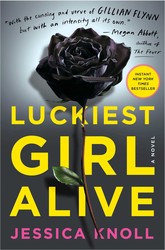 HER PERFECT LIFE IS A PERFECT LIE.As a teenager at the prestigious Bradley School, Ani FaNelli endured a shocking, public humiliation that left her desperate to reinvent herself. Now, with a glamorous job, expensive wardrobe, and handsome blue blood fiancé, she’s this close to living the perfect life she’s worked so hard to achieve. But Ani has a secret. There’s something else buried in her past that still haunts her, something private and painful that threatens to bubble to the surface and destroy everything. With a singular voice and twists you won’t see coming, Luckiest Girl Alive explores the unbearable pressure that so many women feel to “have it all” and introduces a heroine whose sharp edges and cutthroat ambition have been protecting a scandalous truth, and a heart that's bigger than it first appears. The question remains: will breaking her silence destroy all that she has worked for—or, will it at long last, set Ani free?