In the very beginning stages of forming and developing a connection, clear, concise, and direct communication is critical.  Steve and JoAnn Ward, stars of VH1 Tough Love and the authors of Crash Course in Love, offer these tips for expressing yourself online, on the phone, and in person.

You should text only need-to-know information that doesn’t require dialogue — things like “I’m running late,” “I can’t make it,” or “I’m married.” Text messaging is not intended for conversation. People forget that’s what the phone was created for in the first place. You should text only to convey an important piece of information or to make a specific request that can be answered with one sentence. When it comes to dating, it’s hard enough to write something creative and witty on a greeting card when you have a limited amount of blank space. It’s even harder to convey tone, demeanor, and inflection in 160 characters or less. On top of all that, most men are not as eloquent as John Adams or Cyrano de Bergerac. When first getting to know someone, text as little as possible. It is too easy for a text message to be misinterpreted or misunderstood. Even simply not responding quickly enough can send the wrong signals. A good general rule is don’t text ’til there’s sex. At least that way there’s some intimacy established, and both people should feel less insecure if the other isn’t as responsive or expressive as they would like.

This rule also applies to Facebook, Twitter, MySpace, Match.com, or any other form of social networking. I can’t tell you how many times we’ve counseled men and women who have come to conclusions about people they are seeing based on who their Facebook friends are, the pictures on their MySpace page, or the mere fact that their last login on Match.com was after their last date. We suggest that you ignore someone else’s online social networking behavior under all circumstances. Let me be clear: Ignore it no matter what. Imagine if your date dissected every post, picture, or comment on your page. Men don’t trust other men, and any interaction they see between you and other men will be threatening on some level. They may not feel that guys you are talking to online are a direct threat to your connection, but they may feel that you are keeping your options open, playing the field, or trying to make them jealous. If you start seeing someone exclusively, you should make it known on your social-networking sites, and deactivate online dating accounts altogether.

If you’re addicted to your cell phone and can’t help texting your friends with every development throughout the day, you must hold back with the man you are dating and observe the three-text rule. That means if you must text him at all, go ahead and send him one message. If you do not receive a response, wait until you can talk to him and give him a call. When you speak with him, don’t mention the unacknowledged text, and get to the point of why you called. If you don’t reach him, leave a voice mail with your question and, again, do not mention the unacknowledged text. If you are in a situation where you cannot talk on the phone but you must communicate with him, go ahead and send another text — just don’t mention the first one. Under no circumstances should you send him a third message if he has not responded to your first two texts. Either call him if it is something urgent or put the phone down and walk away. Don’t become a text offender. If he isn’t texting you back there is a reason for it, whether you like it or not. The last thing you want is to seem obsessive, impatient, or anxious. He may just be busy, or maybe he was occupied with something when he got the first text and forgot to respond, or he may not be into you. If you’ve left one or two voice mails and sent one or two texts and he doesn’t get back to you in three days, go on with your life as if he never existed. Make your third attempt your final attempt to reach him, and make it clear you’re leaving the ball in his court. Don’t give ultimatums. Don’t make threats. But don’t close the door on him reconnecting in your last message because if he is actually interested and there is a legitimate reason he didn’t get back to you, you’ll never hear it. If he resurfaces and his explanation for being out of touch seems reasonable, give him a reprieve — just this once. If it happens again you’ve got yourself a guy with communication issues, and we suggest you spare yourself the agony of constantly struggling to reach him.

Women tend to give away too much information when they meet a guy they are actually attracted to, usually because they are nervous, they are very interested in the guy, or they don’t think he will judge them. But in reality, men are always judging women in the getting-to-know-you stage. TMI is a turnoff. If you tell a guy your entire life story on the first date, he’s going to think you are insecure, self-centered, or testing him to see if he can handle the baggage in your life. On the other hand, if a “smooth operator” tells a woman his life story, he is usually setting the stage for a sexual advance. The number one reason women give for not wanting to sleep with a man right away is, “But I don’t even know you.” If he’s already revealed everything to you, his response will be, “What do you mean? You know everything about me.” If you’re dealing with a smooth operator, head him off at the pass. Drop hints that you won’t be sleeping with him that night, but don’t be too obvious about it. You can say things like, “I’m having so much fun getting to know you. I’d stay out later if I didn’t have to get up so early for work tomorrow.” Don’t make it seem like you’re following a rule and he’s no exception; men need to feel special. If you’re not interested in sleeping with him that night, but you might consider it in the future, you have to be sure not to make him feel rejected — especially after he has clearly expressed that he wants you. Make him feel exceptional…but don’t make an exception. If you’re dealing with a guy who seems very innocent — maybe he’s a bit shy or reserved and he’s giving you TMI — he’s probably just nervous. Not all guys are trying to get you into bed with this strategy; just be wary of the ones who are. Try to relate and share experiences if your guy is just nervous, but make sure you’re not divulging too much yourself. If there is instant chemistry, a strong connection, and a sense of mutual respect and trust, the gloves can come off. Do whatever you like. Be mindful of rushing a connection with someone, though. Make sure you have the same goals. You may want a relationship when all he wants is to get into your pants. Before you’re intimate with him, be clear about what you expect going forward.

The TMI rule also applies to your profile on an online dating site. If you fill out every detail about yourself on that profile, he has nothing to look forward to discovering about you! Some women may think, If I put everything on there and he still messages me, he must really like me. Wrong! Guys are visual creatures. Most men are only looking at your pictures, and if one likes what he sees he’ll instantly skim your profile for sensational buzzwords like sexy, fun, passionate, etc., before choosing to read it. Other than how turned on he was by the photos and whether or not he noticed any buzzwords, he will consider exactly how much you write. When a man logs in, he typically looks at dozens of profiles at a time, and he’ll usually spend no more than just a few seconds per profile on average. If he has to read more information on your profile than he does with the others, he will lose interest and move on. Subconsciously, he is realizing that looking at your profile requires more work, and to him that means that being with you would require more work than it would with other women. Keep the profile brief: two or three sentences, tops, and light on the really personal details. Let a man get to know about you the old-fashioned way — in person. Tell him about your career, your family, and your life after you’ve met face-to-face. 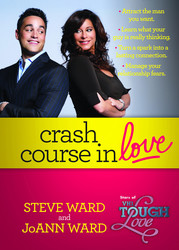 Crash Course in Love
by Steven Ward and JoAnn Ward

Nearly 1.9 million viewers have tuned in for each episode of VH1's Tough Love, the hit show that takes a group of single women and puts them through a rigorous relationship boot camp where they must follow host Steve Ward’s dating rules. Now, for the first time, master matchmaker Steve Ward and his mother, JoAnn, share all of their straightforward, no-nonsense dating and relationship lessons in this handy guide to love. Just as they dish out their tough love on the show, the authors explain how to flirt with a purpose, set up a date, turn a spark into a lasting connection, manage relationship fears, bounce back from rejection, and much more. From trying to find Mr. Right to keeping him around once he’s been snagged, the fresh and innovative advice in Crash Course in Love will transform love lives everywhere.