The proverbial “room of one’s own” has been a signpost on the road to independence for many single women living in urban areas. Despite the benefits to living solo, there are moments in life when we all need a little help. Author Rebecca Traister explains how her first apartment in New York taught her that she didn’t have to rely on a husband for assistance; she could get what she needed from her community. From her book All The Single Ladies.

Five years after I moved to New York, I was able to leave roommates behind and rent my own alcove studio, and my relationship with New York changed almost instantly. In my own apartment, I became happier than I had ever been. My flat was small and not fancy, but I loved every inch of it. I used to have nightmares about having accidentally given up that apartment; in the dreams, I’d be looking into it through its big windows, desperate to get back in.

Getting my own place coincided with an expansion of my socialsphere, an increased ease in my professional life; I’d never felt more formed, more adult, and more at home than I did on the first morning I awoke in that apartment. If Sex and the City used shoes and closets and cocktails as material emblems of larger freedoms, I reveled in my own pricey symbolism; 450 square feet of unrenovated rental apartment.

However, while I was conducting interviews for this book, journalist Jessica Bennet described to me one of her lasting memories of single urban despair: After having broken up with her long-term boyfriend, she recalled the sense of exhaustion, defeat, and loneliness she felt while trying to lug an air conditioner up four flights of stairs to her apartment. As she spoke, she provoked in me a very vivid memory:

I’m standing outside a Lowe’s Hardware store, just four blocks from the new apartment—my very own apartment—into which I have recently moved and which I adore. It’s early summer, five-and-a-half years after my arrival in New York, and I have never felt so happy, so capable. But it’s so hot, over 100 degrees. And the air conditioner is so heavy. I can’t pick it up, let alone carry it home. I’m so happy, I tell myself. I’m so capable. But I’m so tired. And so lonely.

Who’s going to help me? Not the city—this great city, with its independence and its friends and its spaces—the city is what got me into this mess. With its no cars and its sweltering pavement and its steep stoops and its array of similarly unmarried friends, who are wonderful but who also don’t have cars, and are, also, in the midst of this unexpected heat wave, wrestling their own air conditioners into windows and weeping with the hot, sweaty solitude of it.

No, the only thing I want at that moment is a partner: not someone to do this for me, exactly, but to do it with me. I am twenty-seven years old and I want a goddamn husband.

And, at almost exactly the moment that I think this, perhaps even utter it under my breath, a taxi driven by a woman—still a rarity in New York—drops off another Lowe’s customer. I look longingly at the car and the driver rolls down her window and asks if I want to get in. I don’t have cash. Do I have cash at home? She asks. Yes. This woman gets out of the cab, helps me lift the air conditioner into the trunk. When she pulls up at my apartment, my new landlord is there, smoking a cigarette on the stoop. He helps me the rest of the way.

I scoot back out to pay the cabbie and thank her. “You looked stuck,” she says in an Eastern European accent. “Sometimes, you just need a lift.” 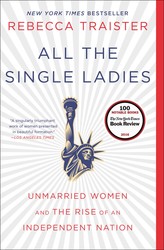 The New York Times bestselling investigation into the sexual, economic, and emotional lives of women is “an informative and thought-provoking book for anyone—not just the single ladies—who want to gain a greater understanding of this pivotal moment in the history of the United States” (The New York Times Book Review). All the Single Ladies is a remarkable portrait of contemporary American life and how we got here, through the lens of the unmarried American woman. Covering class, race, sexual orientation, and filled with vivid anecdotes from fascinating contemporary and historical figures, “we’re better off reading Rebecca Traister on women, politics, and America than pretty much anyone else” (The Boston Globe).