With age often comes wisdom. Here’s my take on the right time to get hitched. From You Can Be Right (or You Can Be Married): Looking for Love in the Age of Divorce.

My father always said, “Don’t get married until you’re thirty. You don’t know what you’re doing until you’re thirty.” My parents met at twenty-one and got married a year later. That didn’t work out; they got divorced when I was seven. So my father just sort of figured that you have no concept of who you are and what you want until you turn thirty.

Seth and I met when I was nineteen and he was twenty. I believe it was in a German theology class. Nothing turns me on like a man with a really thick brain, and I thought he was one of the smartest people I’d ever met. We didn’t get together in college, but we were friendly. After college, he was at Columbia for grad school and I was at NYU and we started hanging out. I remember having Chinese food on his roof one night and it just suddenly felt magical. It was like walking into a movie and here was my happy ending—here was my “happily ever after.” As far as my twenty-one-year-old self could tell, I had been struck by an arrow of Cupid. It was overwhelming.

I felt a real sense of certainty and connection to him. And I was one of these people who was like, “I will not make the mistakes that my parents made—I understand that being married is hard work and requires focus and determination.” In fact, I was so hypervigilant that when we first started talking about marriage, I made us go to a therapist. Couples counseling before we even got engaged. I wanted to make sure that we would never get divorced, no matter what. I was going to guarantee it.

Of course, hindsight’s 20/20, so now I can see all the issues that we had. I’m trying to think of a nonjudgmental way to say this…I’m not a person with a lot of boundaries; I’m very interested in emotional intimacy and messiness. I like close quarters in that regard. I’m one of five kids, and I like a lot of engagement with family and friends and community. So while at first Seth found that charming, I think ultimately he started to find it overwhelming. He is somebody with a lot of boundaries. He just really likes to be by himself. He has, like, two close friends. I mean, this is a stupid example, but on Facebook, I had like eight hundred friends and he had twenty-three. On Flickr, he’s the guy who has photographs of his cat and his new bed. That’s what he’s sharing with the world.

So during our marriage, when we were invited places, I would always go by myself. I just figured, “Okay, different strokes for different folks. It’s not his thing, I’m not going to force him.” I had made the mistake of trying to make him go to things when he didn’t want to, and that didn’t make anybody happy. He was miserable the whole time and then I couldn’t enjoy myself because I was so focused on how unhappy he was. 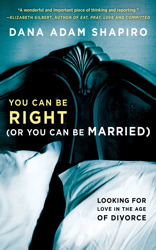 A serial monogamist for more than two decades, Dana Adam Shapiro wanted to know why the honeymoon phase of his relationships never lasted. Believing that you learn more from failure than from success, he spent the next three years interviewing hundreds of divorced people, hoping to become so fluent in the errors of Eros that he would be able to avoid them in his own love life—and one day be a better husband. Shockingly intimate and profoundly personal, this is a page-turning, practical guide that is full of marital wisdom for any couple looking to beat the roulette-wheel odds of actually staying together forever.