Say you find out your significant other is having an affair. Depending on the stage of the relationship, many questions come into play. Do I file for divorce? Do I attend couples therapy? Do I ever EVER forgive him or her? Harriet Lerner, author of WHY WON’T YOU APOLOGIZE?, shares her thoughts on forgiveness after a spouse cheats.

Rosa and her husband, Sam, came to see me in therapy after Rosa discovered that Sam was having an affair. Sam did not deny his infidelity and when she forcefully confronted him, he immediately ended all contact with the affair partner.

I was glad that Rosa didn’t automatically make this a deal-breaker. An affair is not a terrible aberration that occurs only in unhappy marriages. Affairs can happen in excellent marriages as well. Theirs had been a good relationship with a long history, and they had two sons, ages seven and ten. Perhaps his eagerness to join her in couples therapy was the first step in leaving room for the possibility of forgiveness.

Reweaving the fabric of their marriage would be slow and arduous work. Rosa was understandably devastated that the man she counted on to be faithful had been lying to her for almost a year—the many layers of deception adding unspeakable pain to the sexual betrayal. Sam’s countless apologies and expressions of remorse did not keep Rosa from feeling periodically enraged, depressed, crazy, disoriented, obsessed with the details of the affair, and convinced that nothing in her life would ever be normal again. Her anger and pain did not magically disappear in response to Sam’s sincere, repeated efforts to demonstrate that he was now committed to truth telling, to avoiding future temptations, and to doing whatever it took to make amends.

Rosa would feel okay, but then, without warning, something would again trigger the full emotional weight of Sam’s betrayal. Over and over she needed to talk about it. Sam became a brilliant listener. With the help of my coaching and Janis Abrahms Spring’s book After the Affair, which I asked him to read, Sam became committed to hearing her rage and sorrow for as long as it took, which sometimes seemed to him like forever.

Sam was gradually able to take in Rosa’s pain and carry it, as Letty did with her daughter Kim. Instead of waiting in dread for Rosa to bring up the affair for what felt to him like the millionth time, Sam learned to initiate the conversations himself. He checked in with Rosa on how she was doing, and let her know that he was continuing to think about how terribly he had hurt her. He did not leave her alone with her pain, or with the responsibility to keep the conversation going.

Spring calls this “the transfer of vigilance.” In affairs, she explains, the unfaithful partner may complain that his partner remains obsessed with the betrayal despite his repeated apologies. He understandably wants her to move on. But Spring points out that if he’s not available to hear her pain, take it in, hold it, and pay attention to it, she won’t heal. Her book was a crucial resource for Sam during the long bumpy process of restoring trust. “I’m sorry, please forgive me,” isn’t going to cut it, even if repeated one thousand times.

Several years after Rosa and Sam terminated therapy,they called to request one more session to consult about a parenting dilemma with their older son. At the end of the hour, Sam turned to Rosa and, suddenly changing the topic, he asked her whether she had forgiven him. It was obviously a question he had asked Rosa many times before, but now it seemed out of the blue. I imagine our meeting together was a sharp reminder of what had brought them to my consulting room to begin with.

Rosa was silent for a long moment. She appeared to be uncertain as to how to respond. She then recalled a comment I had made when we terminated our earlier work together—that she could forgive whatever percentage she chose, or not at all, and that she did not need to give away all her anger to continue in the marriage, and feel love and compassion for Sam.

“Ninety percent,” she announced. Sam looked at her quizzically.

“I forgive you for having the affair,” she said, in a voice that conveyed considerable assurance. “But I will never forgive you for the time that you slept with her in our bed when I was out of town.”

Rosa forgave Sam 90 percent and that was enough for them to move forward in their marriage. Sam had worked hard over time to earn her forgiveness and rebuild trust. In certain ways their marriage was stronger than ever. I suspect Sam respected his wife more for continuing to claim her 10 percent. Maybe, over many years, the 10 percent of nonforgiveness would lessen, or maybe not. In any case, Rosa knew she was on solid ground not to forgive everything.

Is he biologically designed to cheat?

Excerpted from Why Won’t You Apologize by Harriet Lerner. Copyright © 2018 Touchstone, a division of Simon and Schuster. Used by permission of the publisher. All rights reserved. 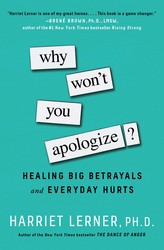 Why Won’t You Apologize?
by Harriet Lerner

“If you want to know why Harriet Lerner is one of my great heroes, Why Won’t You Apologize? is the answer. This book is a game changer.” —Brené Brown, PhD, LMSW, author of the #1 New York Times bestseller Rising Strong “Harriet Lerner is one hell of a wise woman. She draws you in with deft and engaging prose, and then changes your life with her rigorous intelligence and her deeply human advice. I promise that you will never see ‘the apology’ in quite the same way.” —Esther Perel, MA, LMFT author of Mating in Captivity Renowned psychologist and bestselling author of The Dance of Anger sheds new light on the two most important words in the English language—I’m sorry—and offers a unique perspective on the challenge of healing broken connections and restoring trust.Dr. Harriet Lerner has been studying apologies—and why some people won’t give them—for more than two decades. Now she offers compelling stories and solid theory that bring home how much the simple apology matters and what is required for healing when the hurt we’ve inflicted (or received) is far from simple. Readers will learn how to craft a deeply meaningful “I’m sorry” and avoid apologies that only deepen the original injury. Why Won’t You Apologize? also addresses the compelling needs of the injured party—the one who has been hurt by someone who won’t apologize, tell the truth, or feel remorse. Lerner explains what drives both the non-apologizer and the over-apologizer, as well as why the people who do the worst things are the least able to own up. She helps the injured person resist pressure to forgive too easily and challenges the popular notion that forgiveness is the only path to peace of mind. With her trademark humor and wit, Lerner offers a joyful and sanity-saving guide to setting things right.