Saying “I love you” for the first time is scary and exciting. Will he say it back? Have I said it too early? The Betches, authors of I HAD A NICE TIME AND OTHER LIES, suggest the right time to say “I love you.”

After several months of dating this bro you start to get like, super-serious feelings for him. Like the kind that brainwash you into thinking it’s okay to go on a date with him tonight, even though this is the third Real Housewives of New York City episode you’ve missed this month. But with love, everyone is different. The only consistent rule is when to say it: Never before the guy does.

That may be antithetical to our advice to be confident in yourself, but whatever. If you’re 100 percent positive he loves you and you’ve convinced yourself that he’s just a little shy and that you should say it first, then go for it. But we’re writing this book for you, not him, so we have to inform you that your little confession of love turns the tables a bit favoring his side. Because if he doesn’t say it back, your entire world will indubitably fucking collapse. You’ll hate yourself for putting your emotions out there for him to destroy with his dick and his silence, and it will haunt you for the rest of your life, as in you will never tell anyone how you feel about them again. No big deal, right? But, if you’re the confident betch you claim to be, then just do your best to be extremely certain that you will not be upset if the conversation doesn’t go your way. Otherwise, it’s just not worth it.

Think of it this way: Even if he does say it back, you’ll always wonder in the back of your mind if he meant it and if you made it too easy for him. So it’s sort of a lose-lose. We suggest waiting it out, and it will happen when you’re both ready.

But what, you ask, if he says it when he’s drunk? Haha that sucks. This definitely does not count. Think of the last person to whose face you said “I love you.” (Family doesn’t count.) Did you mean it? Prob not. Were you drunk, in a bathroom, bonding with girls whom you just met and made plans to go on Spring Break with? Definitely yes. Need we say more? If he gets wasted and is like “OMGGGG I just fucking love you,” assume he was blackout and pretend it never happened. Don’t bring it up. If he remembers, let him feel stupid and watch him awkwardly squirm.

Saying “I love you” is not about when, because it could happen in one month or six. It’s about why. If you feel like you have all this love in your heart (barf) that you can’t contain (double barf) and just want to tell this guy how you feel, then that’s when you should say it. But, friendly reminder, it will fucking suck if you pour your heart out and all you get is an awww thanks I love having sex with you! in return. If you wait for him to do it, think of saying it back as a romantic gesture. Like, wow you’re such a great girlfriend that you waited until you were really sure to tell him how you felt instead of jumping the gun. And for the record, “really sure” generally means when he has the balls to say it first.

Valentine’s Day is right around the corner. Take a look at the gems that attract and enhance love. 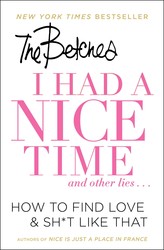 I Had a Nice Time And Other Lies…: How to Find Love & Sh*t Like That
by The Betches

The New York Times bestselling authors of Nice Is Just a Place in France and creators of the online humor and advice phenomenon Betches.com and Instagram account @Betches return to explain the brutal truths of how to date like a true betch, with insights from the Head Pro. In the age of Tinder, Hinge, or any other dating app that matches you with randos, the dating game has grown complex and confusing. Cue the Betches—first, we helped you win at basically everything, and now we’re going to help you win the most important battle a betch can face: dating. Maybe you’re a Delusional Dater who needs to get in touch with reality (seriously, he’s just NOT that f***ing into you) or perhaps you’re a TGF who needs to stop being so desperate and start playing the game. Or maybe you’re just tired of swiping left and ready for the pro of your dreams to put a 15-karat diamond ring on it so you can stop pretending to do work. Either way, we’ve got you covered. So put away the Ben & Jerry’s fro-yo (just because it’s low fat doesn’t mean it’s okay to eat the whole tub) and start dating like a winner.