Office holiday parties can be a wonderful way to celebrate with colleagues, but they have, unfortunately, also become known for enabling cringe-worthy or even downright unacceptable behavior. Cleo Stiller, a television host and the author of the book MODERN MANHOOD, shares her tips for ensuring a safe and fun company holiday party this year.

Since 2017—the year of the Harvey Weinstein scandal and the #metoo movement hit the mainstream—I have received dozens of questions from my audience as a television host of the Peabody Award-nominated series Sex.Right.Now. with Cleo Stiller about what it means to be “a good man” today. So much so that I wrote a book called Modern Manhood: Conversations About the Complicated World of Being a Good Man Today to get to the bottom of all the burning questions when it comes to dating, parenting, money, family, health.

But perhaps one of the most fraught, confusing gray areas for folks? The workplace—and what can and can’t you say, do or touch at work.

There’s a bunch of research on how happy hours help build relationships at work, improve morale, and so on. People who like each other and are working together make most things at a job better. Drinking with coworkers well into the night also tends to lead to some questionable situations—and those who don’t drink can often feel left out of vital work chat.

Does that mean we should cancel all happy hours or holiday parties? No, of course not. But if you’re the manager making those decisions, maybe explore other situations to supplement them. Family picnics? Lunchtime yoga? It’s handy to have an array of ways for employees to hang out so no one group is ostracized or afraid to show up. The solutions will probably be as varied as there are numbers of offices.

“Business is done wherever knowledge is being shared and wherever opportunities are being created,” Danielle Moss, the attorney at Proskauer Rose, says. “That is where everyone should have an equal shot.” Often that isn’t at the office.

As we head into the holiday party season where we tend to rely on cocktails to loosen up and make it bearable to talk to Jerry and Jane from the third floor, people want to know, in today’s climate: Is it ever OK to hook up with a coworker?

Before we answer this question, let’s talk about what everyone else is doing. According to a 2015 study by Approved Index, 65 percent of people who work in an office have been involved in at least one workplace romance. Just about half have had two or more romances. Business Insider found similar results in 2013. According to their poll, 54 percent of people have slept with a coworker. (Half of those hookups happened at the office itself. So, uh, maybe make sure your janitor is well compensated.) Eighty-five percent of respondents to that Business Insider survey thought it should be okay to sleep with a coworker. So, it seems that, by and large, Americans think this is acceptable.

Some of these instances are just hookups, but a significant number led to longer-term relationships. A CareerBuilder poll in 2014 showed that 37 percent of people have dated a coworker, and 30 percent of those relationships led to marriage. In fact, a lot of people find their spouse at work. A 2017 study by ReportLinker says 15 percent of all relationships that led to marriage began at work. The number shifts by year and study, but basically there are three main ways people meet each other today: through friends, while online, and at work.

However, having an office romance is still not totally accepted in the public eye. According to that Harris poll, a third of office romances try to keep it on the down low. A quarter were with a boss or superior. When the romance sputters, it can get dicey. Five percent of those who have had an office romance left that job once it turned sour.

But the majority of the people I talked to felt like, in general, as long as both were on equal footing at work, you’re good to go.

“If neither of you are in a relationship, and it’s consensual, go for it. Makes day-to-day work a little more fun and interesting.” —Ronaldo, 30

“If your job is completely meaningless and there is NO differential in power, if it’s a side hustle, and you won’t share with other colleagues, or brag to other colleagues, then go for it. Otherwise, NO. There are seven billion people on the planet. Everyone loves Jim and Pam from The Office but it leads to more problems than good.” —Colin Adamo, Hooking Up and Staying Hooked founder

There’s no hard-and-fast rule here. It’s one thing to have two coworkers make eyes at each other and start a relationship over lunchroom salads and cubicle flirtation. But it’s another thing to re-member the history of gendered power dynamics in your industry and how that’s affecting how you see coworkers.

“It’s like, well, is it two people who happen to work with each other who genuinely feel a spark and want to pursue a relationship?” Lux Alptraum, Faking It: Lies Women Tell and What They Reveal says. “Or is it someone feeling entitled to the other person because of their gender? Is it somebody feeling like you are a woman in the workplace and therefore you are here for my entertainment and you are here because you want to be perceived sexually?”

Alptraum suggests just going slow. You’ve got the rest of your life to deal with this—you might as well make sure you’re being clear and communicating early, even if it’s just a casual fling. Be- cause if things go poorly, you’re still stuck bumping into each other walking out of the bathroom, or cc’ing each other on office party invites. It would suck to cause someone to leave their job because of a spoiled office romance with you. Just a simple (though perhaps tough) conversation at the front end could prevent a lot of messiness later on.

One thing you might be thinking? “This seems like a lot of intentionality and foreplanning for a holiday party hookup!” And you’re right. Chances are, you aren’t doing that a holiday party, so play it smart and stick to one drink or seltzer and see yourself home.

It’s critical right now that women and men act mindfully with their colleagues and take power dynamics into consideration. You’re not perfect, and no one expects you to be. But we do expect you to try. Happy holidays!

Cleo Stiller is a Peabody Award and Emmy Award–nominated reporter and author of Modern Manhood: Conversations About the Complicated World of Being a Good Man Today

Throwing a holiday party of your own? Don’t miss: 11 Tips for Hosting a Fun Dinner Party–for You and Your Guests 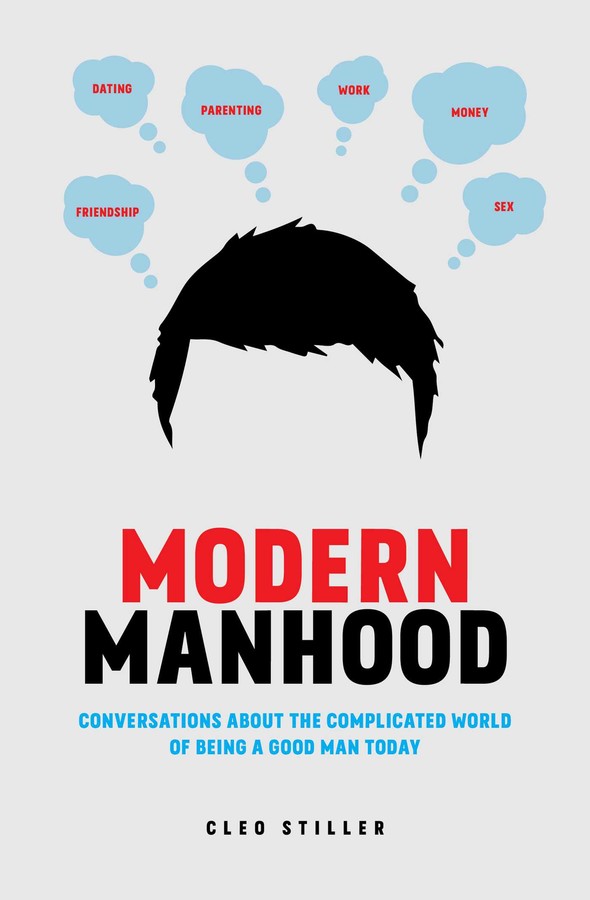 Emmy and Peabody Award–nominated health reporter Cleo Stiller’s fun(ny) and informative collection of advice and perspectives about what it means to be a good guy in the era of #MeToo.

Here are a few self-evident truths: Predatory men need to go, sexual assault is wrong, and women and men should be equal. If you’re a man and disagree with any of the aforementioned, then this book isn’t for you.

But if you agree, you’re probably one of the “good guys.” That said, you might also be feeling frustrated, exasperated, and perhaps even skeptical about the current national conversation surrounding #MeToo (among many other things). You’ve likely found yourself in countless experiences or conversations lately where the situation feels gray, at best. You have a lot to say, but you’re afraid to say it and worried that one wrong move will land you in the hot seat. From money and sex to dating and work and everything in between—it can all be so confusing! And when do we start talking about solutions instead of putting each other down?

In Modern Manhood, reporter Cleo Stiller sheds light on all the gray areas out there, using conversations that real men and women are having with their friends, their dates, their family, and themselves. Free of judgment, preaching, and sugarcoating, Modern Manhood is engaging, provocative, and, ultimately, a great resource for gaining a deeper understanding of what it means to genuinely be a good man today.