We’ve all been there. We meet a guy or girl who is caring, respectful, genuine, and is completely dedicated to us. We ghost him or her and choose the guy or girl we definitely don’t stand a chance with. Why is this so common? Why do we give excuses like “he’s not my type” when he or she actually might be? Leslie Cohen, author of THIS LOVE STORY WILL SELF-DESTRUCT, shares the best dating advice she ever received.

Occasionally, I like to look back, to sift through that giant shoe box, shoved in the back of a lesser used closet, filled with old photos, birthday cards, and assorted paraphernalia from ex-boyfriends. And when I do, I always come to the following executive conclusion: I was such an idiot. Recently, I was rummaging amongst the wreckage and came across a letter from this guy I knew while I was living in Colorado at age twenty-two. It was long and hand-written and as I read, I was struck by how overwhelmingly nice it was. He was just a friend, but, come to think of it—didn’t he write me these hand-written letters all the time? And, actually, didn’t he take me to the doctor once when I was sick? I also remembered something about him leaving a bag of cherries at my doorstep. And then I had an epiphany, of sorts, about eleven years too late: That guy really liked me. Why had I, more or less, ignored him?

Ironically, here’s what I remember about my time in Colorado: having a swarm of dysfunctional relationships, disappointing nights out, and chasing after guys who were only interested in me under certain circumstances. I remember being so envious of anyone who was in a stable relationship. Yet, here was someone who so clearly could have fit into that role. The more I thought about it, the more I realized that this was a pattern of mine. In high school, college, and beyond, there was always one guy around who liked me, and that I overlooked. I pushed aside any indication of their romantic interest. After all, I was busy pursuing all of the guys that weren’t so interested in me. And who has the time?

This is going to sound a tad controversial, but here is the lesson that I learned: your instincts are not necessarily to be trusted. Because instincts are tricky. Instincts are to love any club that won’t have you as a member. Someone’s availability can be instinctively unappealing. How many times have you been not so interested in a guy only to have him not return your phone calls and only then are you somehow desperate to hear from him again? His value immediately rises the second he drifts away. That’s how our pea-sized brains work. Which really makes no sense. And just goes to show you that sometimes, you have to override your instincts. If you want to be treated well, look around at the people in your life and at who, exactly, is treating you well. Hesitations like “he’s just a friend” or “he’s not my type” can usually be attributed to something superficial which you might not find so convincing, once you get to know someone better. Don’t assume that these things are set in stone.

I was quick to lament the way that I was treated but never so interested in examining what I myself might have been doing wrong. I now realize that I wanted a nice guy, in theory, but I wasn’t actually looking for one. In the end, the best advice that I’ve ever received about dating is very simple and it’s this: Seek, and you shall find.

Become fluent in the kissing language. 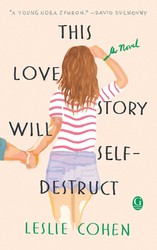 This Love Story Will Self-Destruct
by Leslie Cohen

This is the classic tale of boy meets girl: Girl…goes home with someone else.Meet Eve. She’s a dreamer, a feeler, a careening well of sensitivities who can’t quite keep her feet on the ground, or steer clear of trouble. She’s a laugher, a crier, a quirky and quick-witted bleeding-heart-worrier. Meet Ben. He’s an engineer, an expert at leveling floors who likes order, structure, and straight lines. He doesn’t opine, he doesn’t ruminate, he doesn’t simmer until he boils over. So naturally, when the two first cross paths, sparks don’t exactly fly. But then they meet again. And again. And then, finally, they find themselves with a deep yet fragile connection that will change the course of their relationship—possibly forever. Follow Eve and Ben as they navigate their twenties on a winding journey through first jobs, first dates, and first breakups; through first reunions, first betrayals and, maybe, first love. This is When Harry Met Sally reimagined; a charming tale told from two unapologetically original points of view. With an acerbic edge and heartwarming humor, debut novelist Leslie Cohen takes us on a tour of what life looks like when it doesn’t go according to plan, and explores the complexity, chaos, and comedy in finding a relationship built to last.