Men whose wives or girlfriends regularly deprive them of sex may feel justified in cheating, warns Tyrese Gibson in his book Manology: Secrets of Your Man’s Mind Revealed, with Rev Run.

Unfaithfulness comes so easily to many men because they actually feel justified in cheating. Despite what women think, very few men walk around saying to themselves, I’m going to cheat on this woman and I don’t care how she feels about it. In reality, we actually care a great deal, as twisted as that might sound.

It’s just that for men, there isn’t the same emotional attachment to sex as there is for women. For us, it’s as easy as taking off our shoes.

So, what’s the number one reason compelling most men to feel so sorry for themselves that they can justify cheating?

That’s easy: a lack of sex at home. If a hungry man is not getting his big appetite for sex met at home, he is going to feel justified looking to another woman for it. It’s really that simple.

It could be an issue of quality. It always used to surprise me when a woman wouldn’t want me running around on her yet the sex she was giving me was lackluster. Don’t get me wrong, I’d still take that lackluster sex from her for a while, but I’d also be thinking, It’s time to go out there and find some of the good sex that I’m used to. I have experienced something better than this and I couldn’t erase those memories even if I tried.

Or maybe it’s an issue of quantity, not quality. Perhaps a man is getting good sex, just not enough of it. One time I asked a friend why he was always stepping out on his girl and he told me, “She knows how often I need my ‘medicine,’ but she won’t give it to me. What am I supposed to do, just stay here? No, I gotta do what I gotta do, period.” For my friend, sex was the fix he claimed he “needed.” 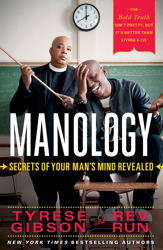 In this New York Times bestselling book, Tyrese Gibson, multiplatinum R&B singer and movie star, and Rev Run of Run DMC and star of Run’s House, present a bold, honest, and uncensored look into the male mind. Tyrese and Rev are the unlikeliest of best friends—Rev is married with six kids and Tyrese is a single dad still hesitant to settle down. But after an unexpected argument in which Rev insisted that marriage is forever, and Tyrese countered that you could bail when the sex went bad, the two decided not just to agree to disagree, but to team up and open their debate to a larger audience. Manology will help you weed out the cheaters, MANipulators, and pimps from the good men, and it will give you the tools to know if your man is the marrying kind. In “Manology After Dark,” the guys even give the low-down on what men need in bed, before and after they put a ring on your finger. Some of men’s behavior can’t be changed, but as Tyrese and Rev share, it’s better to face the truth. With Rev’s hard-earned knowledge on how to make a marriage work, and Tyrese’s sometimes uncomfortable but always honest take on the single man’s mindset, Manology is your one source to help you take control of your love life and truly understand your man.