By Sharon Knolle
Is there a Real Housewives curse? Given how many of the women have gotten divorced—including Camille Grammer and Adrienne Maloof—since joining the franchise—there just might be.

The Huffington Post pointed out that a whopping 34 Real Housewives have split from their spouses, the latest being Real Housewives of New Jersey star Dina Manzo, who announced in February that she was splitting from her husband of seven years. The couple even got married on camera in a 2005 VH1 special, My Big Fat Fabulous Wedding, although Tony Manzo never appeared with her on Real Housewives.

Former RHONY star Bethenny Frankel married Jason Hoppy in 2010; their courtship and marriage were the subjects of the spin-offs Bethenny Getting Married and Bethenny Ever After. The fairy tale ended in January, when Frankel filed for divorce.

The drama of Maloof’s divorce has fueled several episodes of Real Housewives of Beverly Hills, with her 2012 split from plastic surgeon Dr. Paul Nassif leading to allegations of abuse on both sides. They finally reached a settlement in 2012. Maloof rebounded with the much younger Sean Stewart, son of rocker Rod Stewart.

Divorces make for great ratings: The January 2011 episode of RHOBH, in which Kelsey Grammer told Camille that he wanted a divorce, was the most-watched episode of the season. Camille later said she knew her 13-year-marriage was ending before signing onto the Bravo reality series in 2010. She has found love again but, after her bruising divorce, isn’t in a rush to get married again anytime soon.

Socialite Carole Radziwill, a surprising addition to RHONY given her Kennedy connections, split from her rocker boyfriend, Russ Irwin of Aerosmith, in February. Radziwill detailed her biggest loss—the 1999 death of her husband, ABC News producer Anthony Radziwill—in the best-selling book What Remains: A Memoir of Fate, Friendship and Love.

Brandi Glanville, who joined RHOBH in 2011, had already gone through her messy divorce from Eddie Cibrian, although the acrimony has continued. Glanville shared the details of her ugly split in her new book Drinking and Tweeting. Her ongoing Twitter war with Cibrian’s current wife, LeAnn Rimes, stayed in the headlines, as did her pot-stirring with fellow RHOBH stars Kyle and Kim Richards.

RHOBH regular Taylor Armstrong didn’t just suffer the tragic loss of her husband Russell, who committed suicide in 2011, but also the jolt of being fired from the show. She’s reportedly anxious to land her own reality series for a much-needed source of income.

Tammy Knickerbocker from The Real Housewives of Orange County left the series after the 2007 death of her ex-husband, Lou. She opted to remove her daughters, who were also regulars on the show, from the spotlight, but daughter Lindsey was back in the news in January with a DUI, in which she reportedly punched a cop and drunkenly rammed cars.

One exception to the curse: Real Housewives of Atlanta and New Normal star NeNe Leakes, who filed for divorce from husband, Gregg Leakes, in 2010 and announced in November 2012 that the two had reconciled. In 2011, she penned the book, Never Make the Same Mistake Twice. 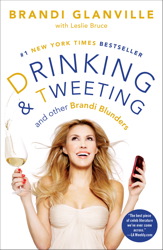 Drinking and Tweeting
by Brandi Glanville

It’s impossible not to love Brandi Glanville, the unapologetically filter-free breath of fresh air on The Real Housewives of Beverly Hills. She spills all her secrets in this sassy, raunchy, and compulsively readable #1 New York Times bestselling memoir, dishing about everything from her DUI and her cheating ex to her one-night stands and the secret plastic surgery that made her “seventeen” again. Clear your schedule, grab a comfy seat, your favorite cocktail . . . and maybe a Xanax. #BestAfternoonEver.