How often you’re intimate with your boyfriend could have an impact on his desire to marry you. Here’s what men really think about sex, from Why Men Fear Marriage: The Surprising Truth Behind Why So Many Men Can’t Commit.

Sex is a major consideration for men when we think about marriage. We like consistency, and if we’re giving thought to a particular woman regarding marriage, it goes without saying that we are getting good, if not great, frequent sex from her.

What men fear is what we so often hear from many of our male friends. If you only knew how many times we’ve been warned that the number of times we have sex with our girlfriends will fall off dramatically once they become our wives.

We understand that. We just don’t care.

At least not as single men thinking about how much sex we should receive as married men.

After we’re actually in the situation, experiencing it, dealing with all the factors that can interfere with sex, sure, we’ll sympathize then. But no man wants to hear, before he’s even married, that the frequency at which he has sex with his wife will diminish.

That’s like a car salesman telling his customer before he actually buys the car that after the purchase, the frequency at which his automobile runs will decrease.

Getting sex as a single man whenever we want it, then getting married and getting it only on occasion, doesn’t sound like a fair trade to most men. Men who are thirty or thirty-five become accustomed to a certain amount of sex. Many men fear walking down the aisle because, if what so many of us hear is true, the quantity of sex we’re having will drop off. But that’s not all we’re concerned about. There is also the issue of quality.

This leads me to another point that may halt men from proposing.

Is the sex you’re giving your guy good? “Sure!” you confidently boast. But do you know that’s the case? Did he propose after the first time he experienced sex with you? Oh. Then it’s not really that good. But, then again, whose is? And we don’t expect it to be that good anyway.

What you should at least know when having sex with your guy, the guy you could possibly see as your future husband, is that he has set a bar that you must clear, a level of expectation he’s waiting to see if you can meet.

That bar represents only the best sex he’s ever had with any of his past girlfriends.

Let me tell you how this works.

Everyone — men and women — have had past relationships with partners who have given them mind-blowing, heart-thumping, limb-numbing sex. But you didn’t marry those guys, and we didn’t marry those women. Maybe because they just weren’t right for you. Or maybe we didn’t want them because even though the sex was so great that we wanted to tell the world, including our mothers, about it, those girls, whoever they were, were lacking in other areas.

Let’s say they didn’t cook, or they nagged us to death, or any other reasons that men consider deal breakers regarding marriage.

So we walked away from those women. But it’s not as though the great sex we had with a particular girl did not leave an impression on us. On the contrary. We never forget how wonderful, how delightful, the experiences were with that woman. So we file them away as a comparison test for future women.

This is your litmus test.

So if that woman gave your man eyes-rolling-to-the-back-of-his head oral sex, then sister, in his mind, you need to be providing the same.

If she was a gymnast and could do a spectacular floor routine — vault onto the chest of drawers, then perform a double-back-flip dismount onto his penis, that man will at least be expecting you to do a cartwheel or two.

The fact is, no man wants to marry a woman who has been a slut all her life; we just want a woman who knows as much as a slut does.

No. Just kidding. Well…maybe not.

How we see it is, we’ve been having sex for fifteen, twenty years, and so have you. There’s a certain amount you need to know, and know it well. We know that you have no problem telling a man you’re having sex with what to do, where it should go, and how long it should go there if he’s not performing to your expectations.

We don’t want to do that. We’re not going to do that. We would sit in pain, grit our teeth, tough out the bad experience, then never call you back rather than say, “Uh…uh…biting is not good. No need for teeth. You aren’t supposed to eat that, honey.”

Fortunately for you, most men aren’t so hooked on sex that we’ll walk away from a great woman just because she can’t outdo the girl in our past who gave us the best sex of our lives.

So, even though that girl had us coming back like a crack addict, there is the fact that she may actually have been using crack.

That’s usually a deal breaker for the average guy. You, on the other hand, don’t use crack. We take that into account, and will knock off a little on the expectation test, meaning you won’t have to score as high.

If you’re smarter, nicer-looking, have a better job, make more money, are funnier, or a better cook, we will continue to compensate you for those things, understanding that, no, you’ll never be able to do what she did sexually, but you did just win the Pulitzer Prize. We figure that should count for something. Unfortunately, we are still men, so it doesn’t count for everything.

So, if you’re a talented, smart, caring woman with whom your boyfriend has already had sex several times, and seems to have enjoyed it, then you should rest assured that if you’re not as good as the girl who gave him his best sex, in addition to all your other qualities, you’re damn good enough to keep him interested.

Now that you’ve gotten that far, let me tell you what will have him rethinking the idea he had of one day marrying you.

I know this may sound chauvinistic, but if there is one thing you should never deny your boyfriend of, it is sex. Men simply think there is just no reason to do that.

If he’s taken you out to dinner, or if he’s washed your car, or if the two of you just watched a movie and knocked off a frozen pizza, or even if he just woke up and wants some, when we roll over, tap you on the shoulder, and ask, “Honey, may I?” we expect you to say, “Of course you may,” or just silently roll over while lifting up your nightgown.

I know, I know. What if you don’t feel like it? You’re more than a machine for sex, and you have a brain, too. Of course you do. And your guy loves you for all that. But if you are his girlfriend, and he’s been dating you for a year, that means he’s probably crazy about you. And if he’s even close to thirty years old, the idea of marrying you has probably scrambled across his brain at least once.

But, on this one morning, at 5:36 a.m., when he was particularly in need of some of you, you told him no. How were you to know that the dream he just woke up from was of you and him walking down the aisle after being wed. How could you know that he might have been ready to pop the question after you gave him an early morning shot? You couldn’t.

If you deny your guy sex, it will only have him thinking that may be a glimpse of things to come. This might sound ridiculous to you, but this is how we truly think. 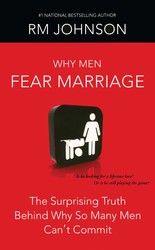 Why Men Fear Marriage: The Surprising Truth Behind Why So Many Men Can’t Commit
by RM Johnson

You’re out there dating, and you’re looking for marriage material. But how can you tell if the guy who’s wining and dining you tonight has (somewhere deep inside his complex male machinery) the potential to make a lifelong commitment? And what can you do to significantly increase your odds for finding Mr. Right? Why Men Fear Marriage is the new dating bible, and it begins with one essential golden rule: If a man is interested, he’ll let you know.