When was the last time you successfully wooed by a funny pick-up line?

It’s probably been a long time—if ever. But according to science, humor really is sexy. A survey of 700 men and women discovered that people considered humor among the most important of all characteristics when choosing a partner, romantic or otherwise. And studies of happy marriages, especially those lasting more than half century, find spouses often ascribe their marital bliss in part to laughing together.

Interestingly, the kind of humor you find attractive appears to differ depending on your gender. In 2011, researchers analyzed more than 250 online dating profiles posted by people in London and several Canadian cities. They found that men were nearly two times as likely to boast of their humor-production abilities (“I’m an aspiring stand-up comic”), whereas women were nearly two times as likely to be looking for a humor producer (“I want someone who can make me giggle”).

The discrepancy makes sense from a sexual-selection standpoint. A sense of humor in men could be seen as a sign of intelligence, social desirability, and overall genetic fitness. In other words, good jokes are a guy’s version of colorful peacock plumes. Since women have an evolutionary incentive to find the best possible mate, it helps to be on the lookout for the funniest possible peacock.

Humor is such an aphrodisiac, in fact, that it can even signal doom for a relationship. Studies have found that dating couples who exhibit strong senses of humor are more likely than others to break up. As paradoxical as that sounds, this makes sense. Since humor is such a highly regarded trait, it’s more likely that others will be enticed by these attractively funny people, and lure them away from their partners.

In other words, there may be biological incentives for men to joke around more than women. But before you take that to mean that guys are funnier than ladies, remember that just because someone jokes around a lot, it doesn’t mean all those jokes are funny.

The secret to comedy, after all, is quality, not comedy. To prove it, we asked some of our favorite female comedians to share their favorite pick-up lines. Judging from the results, these funny ladies are giving guys everywhere a run for their money.

Amber Tozer: “I like to go up to guys, point at my boobs, and say, ‘Can you believe these are full grown?’”

Mara Wiles: “The best pick-up line I ever heard was more of a conversation starter about Faygo and Juggalos. What can I say? I am a sucker for the inner workings of the Insane Clown Posse.”

Kristin Rand: “Listen, baby girl, let’s be real right now. Most men in this room are going to find you repulsive, OK? But luckily for you, I am from the South and you do look like biscuits and gravy.”

Timmi Lasley: “I like the way you handled the mic. Makes me wonder what else you can handle.” 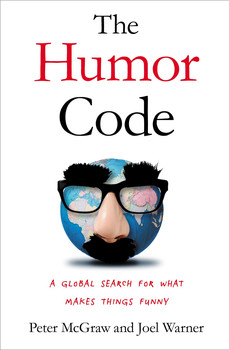 The Humor Code: A Global Search for What Makes Things Funny
by Joel Warner and Peter McGraw

Funny, surprising, and often touching, The Humor Code is a revealing exploration of humor, society, and an unusual friendship.