We know, we know–there’s no excuse for being unfaithful. Or is there? In his book The Wonder of Aging, author Michael Gurian shares controversial new research that claims some people may be genetically or chemically predisposed to monogamy.

New scientific evidence over the last two decades indicates that we may have genetic and chromosomal markers for monogamy and non-monogamy. These markers may specifically control our dopamine-oxytocin link when we mate sexually and emotionally with a partner. It may work this way: for all of us, mating (sex and intimacy) activates genetic markers that connect our brain’s dopamine-flooded reward chemistry with our sexual and emotional chemistry. For some of us though, those markers may only activate with a single partner once we find that partner. But for others, those markers and that dopamine chemistry may not activate with a single partner but continue to activate with multiple partners. Thus, you may marry someone who promises to be monogamous but who may not be genetically or chemically monogamous; similarly, we ourselves may make the promise, then discover we are not monogamous.

This new scientific evidence regarding monogamy is controversial but can be helpful to us in understanding fidelity and infidelity as we age. I have used this new scientific information to work with couples whose marriages have been shocked by infidelity. When one or both partners have been nonmonogamous during marriage, I ask the couple about family histories—most often, infidelity has existed in the family line, on either the maternal or paternal side or on both sides.

For some couples, isolating nonmonogamy as a biological trait helps to isolate the psychological issues that the couple brings to the marriage. Two comments by a couple in counseling illustrate this. He was fifty-two and she was fifty-one; they had been married twenty-six years and had two grown children.

He: I don’t know why I had the affairs. I love my wife. I just never understood. I never wanted to hurt her. When I saw Bill Clinton and Arnold Schwarzenegger and those guys doing it, I thought, “They’re not like me, I’m better than them,” but I wasn’t, and I knew I was doing a bad thing, but I just couldn’t understand why I was doing it.

She: I don’t know if I can stay married to him now that I know about the affairs, but I am glad to understand about the science of this. If it’s true, then I’m not some ugly, fat, inadequate wife that drove him to stray, and he’s not an evil person. There’s something else going on. If there’s any chance I can trust him again, knowing the science helps.

These honest words led to significant growth and transformation for this couple. For many couples, it is not enough help, and for all couples, deeper work in both intimacy and separateness are needed if partners have strayed, but even in a small way, the new science on monogamy may help couples heal the spirit of broken love in the stages of age, especially the age of transformation, when everyone is going through menopause and andropause, and a number of men and women shock their marriages with affairs. 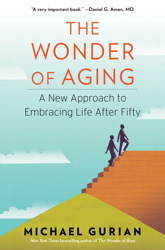 Wonder of Aging: A New Approach to Embracing Life After Fifty
by Michael Gurian

The New York Times bestselling author of The Wonder of Boys offers a holistic and uplifting look at the emotional, spiritual, and cognitive dimensions of aging—and how to celebrate life after fifty. The years after fifty are generally discussed in terms of health: what are the physical symptoms that come with advancing age, and what can we do about them? The Wonder of Aging goes beyond these topics to serve as both a spiritual, meditative guide and a practical exploration of the emotional and psychological dimensions of the second half of life.