Breakups suck. Whether you knew your relationship wasn’t working or the breakup took you by surprise, it hurts. There are many healthy ways of dealing with this grief (although, we definitely recommend tubs of ice cream) but the most important aspect is to achieve closure. Guy Winch, author of HOW TO FIX A BROKEN HEART, shares why closure is so important and why we shouldn’t make assumptions.

Kathy, whose boyfriend Rich broke up with her after a romantic weekend in New England, spent countless hours analyzing every nuance of their trip, convinced something must have happened to cause the breakup. Images from their trip constantly popped into her mind unbidden and Kathy pursued each one of these uninvited mental guests, hoping they would lead her to the crucial clue.

But Kathy’s entire exploration was founded on two incorrect assumptions. First, she assumed something vital had indeed happened that weekend, something significant enough to cause Rich to break up with her two weeks later. Yet, Rich had already explained his reasons for the breakup and they not only fit the facts of the relationship they also fit who Rich was as a person.

Despite the anguish the breakup caused her, Kathy still considered Rich a nice guy. Indeed, the one characteristic Kathy and her friends commented on most frequently throughout the relationship was how exceptionally nice and decent Rich was. And he was. Over the six months he dated Kathy, he repeatedly and consistently demonstrated empathy and compassion. His kindness was even evident in how he broke up with her.

Rich explained that he truly liked Kathy and really cared for her. He emphasized that he authentically enjoyed her company (which is why he was able to enjoy a lovely weekend with her so close to the breakup). But after dating Kathy for six months, his feelings for her had simply not progressed sufficiently. As much as he liked Kathy, he wasn’t in love with her. Since he wanted to give the relationship every chance to succeed, he suggested the romantic weekend in New England to see if it would tip his feelings for Kathy into the Love column. Once he realized his feelings hadn’t changed, he let Kathy know right away. He was well aware of the physical ordeals she already endured and he knew delaying the breakup would only make it more painful for Kathy in the future.

In other words, there was no mystery to be solved. Nothing happened on their romantic weekend that soured Rich on the relationship. Rather, not enough happened to change how he felt. Despite both of them having a wonderful time, Rich simply didn’t cross an emotional threshold and fall in love.

Kathy’s second assumption was even more problematic. She believed whatever went wrong that weekend must have been her fault. Feeling responsible for the demise of the relationship yet not knowing what she had done to cause it only added fuel to her desperate search for answers.

Refusing to accept Rich’s perfectly reasonable and logical explanation for the breakup was a huge mistake on Kathy’s part, one that significantly impeded her psychological recovery. Studies of romantic breakups have identified a variety of variables that predict healthy emotional adjustment and timely psychological healing. One of the main factors that allows us to let go and move on is having certainty about why the breakup occurred. Having a clear understanding of why things ended helps us reach closure much sooner than we might otherwise. Had Kathy simply accepted Rich’s reasons at the time, she could have avoided months of needless mental analysis and intense and prolonged emotional anguish.

Here are more tips on how to recover from a breakup. 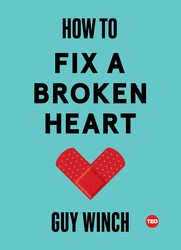 How to Fix a Broken Heart
by Guy Winch

Imagine if we treated broken hearts with the same respect and concern we have for broken arms? Psychologist Guy Winch urges us to rethink the way we deal with emotional pain, offering warm, wise, and witty advice for the broken-hearted.Real heartbreak is unmistakable. We think of nothing else. We feel nothing else. We care about nothing else. Yet while we wouldn’t expect someone to return to daily activities immediately after suffering a broken limb, heartbroken people are expected to function normally in their lives, despite the emotional pain they feel. Now psychologist Guy Winch imagines how different things would be if we paid more attention to this unique emotion—if only we can understand how heartbreak works, we can begin to fix it. Through compelling research and new scientific studies, Winch reveals how and why heartbreak impacts our brain and our behavior in dramatic and unexpected ways, regardless of our age. Emotional pain lowers our ability to reason, to think creatively, to problem solve, and to function at our best. In How to Fix a Broken Heart he focuses on two types of emotional pain—romantic heartbreak and the heartbreak that results from the loss of a cherished pet. These experiences are both accompanied by severe grief responses, yet they are not deemed as important as, for example, a formal divorce or the loss of a close relative. As a result, we are often deprived of the recognition, support, and compassion afforded to those whose heartbreak is considered more significant. Our heart might be broken, but we do not have to break with it. Winch reveals that recovering from heartbreak always starts with a decision, a determination to move on when our mind is fighting to keep us stuck. We can take control of our lives and our minds and put ourselves on the path to healing. Winch offers a toolkit on how to handle and cope with a broken heart and how to, eventually, move on.