The next time you go out in hopes of meeting someone, take a slightly less attractive friend and use the “decoy effect” to your advantage, as explained in The Mathematics of Love. It’s a simple (and yes, somewhat callous) trick to seeming more appealing and attractive.

When someone decides to approach you in a bar, or to accept your advances at a party, they’re not judging your beauty against every other face in the world. Nobody minds that you don’t look like George Clooney or Heidi Klum. They’re making a decision based on the options available to them at the time, and this is perhaps where there’s room to use a mathematical idea to your advantage.

By defining these options in equations, we can create a language to explain why we all make the choices we do, in what has become known as “discrete choice theory.”

Despite our illusions of free will, there are some simple rules that people will often follow when coming to a decision. These rules mean that people’s choices are surprisingly easy to manipulate. As the economist Dan Ariely puts it, we’re all just a little bit “predictably irrational.”

This is known in economics as the “decoy effect.” What it demonstrates is that the presence of an irrelevant alternative can change how you view your choices. It has been exploited by marketing experts for decades. But it also has the potential to help make you seem more attractive.

In his 2008 book, Dan Ariely explains the impact of the decoy effect on perceptions of human beauty.

By surveying his students regarding the attractiveness of a range of male faces, Ariely found two that were considered equally attractive; we’ll call these two men Adam and Ben. Using Photoshop, Ariely created uglified versions of both Adam and Ben and then made two sheets of faces to test his theory.

He handed out these sheets to six hundred of his students, with 50 percent of them viewing the first sheet and 50 percent viewing the second, and asked each participant to say which face they considered most attractive.

No one chose the uglified images, but their presence on the sheets had a dramatic impact.

On both sheets, the uglified versions of Adam and Ben served to make the original images more appealing, just as the decoy effect would predict.

The message for making yourself appear more attractive is clear. When going to a party to talk to potential partners, choose a friend to go with you who is as similar-looking to you as possible, except slightly less attractive. Having them there will make you seem like a better option.

If this seems callous, remember that making these judgments is something we all do instinctively. Math is the language of nature, and by listening to what the mathematics tells us, we can all gain a better understanding of how and why we do the things we do.

After all, as George Bernard Shaw put it, “Love consists of overestimating the difference between one woman and another.” So don’t be shy to use the decoy effect to your advantage. 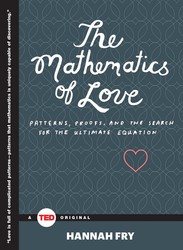 Mathematics of Love
by Hannah Fry

In this must-have for anyone who wants to better understand their love life, a mathematician pulls back the curtain and reveals the hidden patterns—from dating sites to divorce, sex to marriage—behind the rituals of love.The roller coaster of romance is hard to quantify; defining how lovers might feel from a set of simple equations is impossible. But that doesn’t mean that mathematics isn’t a crucial tool for understanding love. From evaluating the best strategies for online dating to defining the nebulous concept of beauty, Dr. Fry proves—with great insight, wit, and fun—that math is a surprisingly useful tool to negotiate the complicated, often baffling, sometimes infuriating, always interesting, mysteries of love.