He’s one who’s able to freely communicate his feelings and emotions and not worry about being judged. He’s a man who is comfortable showing love and joy to a woman. A man who is able to appreciate a woman and treat her like a queen. A man who can spend time with the guys and still make quality time for his special lady. He enjoys learning new things. He isn’t afraid to admit when he’s wrong and is willing to work on his weaknesses. He’s strong enough to take charge, and yet strong enough to let you take charge, too.

I can see your hands now waving in the air. Oh yes, I can. You’re screaming, “Yes, Hallelujah!” You want to know where this man is and why you haven’t met him. You were hoping that your current or ex-boyfriend was this type of man.

Guess what a woman often does if a man is not quite up to her standards? She actually thinks she can turn him into that type of man. Many women feel they can change a man over time. Can you believe in this day and age, there are women who still think this is possible?

In my travels across the country, I’ve met scores of women who think they’ve found The One. He is Mr. Right. He has it going on. So I ask them, “Why are you waiting to talk to me? If you have met ‘The One,’ then you don’t need advice from me.” Then they start telling me their stories. I listen, just hoping they’re not going to say those words I truly hate to hear women say: “But I love him. I really want to make this work.” Or, “I think he can change. He just needs someone like me in his life.”

Right. Just like you need another hole in your head.

Not all men are relationship material. Many of them are not quite ready to settle down. They’re perfectly content being bachelors. But you are ready to settle down in a relationship. However, the men you meet, well, you either settle, or you throw your hands up and give up. And during that phase of getting to know one another, there are some things that are just not adding up.

I’m going to do you a favor and break it down so that you will be able to identify a man who isn’t worth your time.

If a man tells you that he isn’t interested in being in a relationship, then guess what? That means not with you, either. I don’t care how many times he has taken you out on a date, sexed you really well, and given you late night conversation. True, his actions are saying something totally different, but, if he says he is not interested in a relationship, then he is not interested. Let him go. Don’t get your hopes up thinking you can change his mind. Because the truth of the matter is, everything he is doing with you, and all the time he may be spending with you, he’s doing the same with other women. They are getting equal amounts of his time.

Let him go and move on. It will save you untold time and aggravation trying to figure out why the two of you are not a couple.

If a man tells you that he has a girlfriend, or that the woman in his life is just a friend, but he is always looking for more female friends, run, run, run! He is not faithful. That is a tell-tale neon sign that he won’t be faithful to you, either. Some women actually think it’s cute to be dating a man with a girlfriend, or many lady friends, and they think they are getting one over on the unsuspecting girlfriend. Trust me, there is nothing cute about it. There is a thing known as karma. You may not feel its effects immediately, but trust me, honey, karma will come back and bite you in the butt. Leave that man and drama alone.

If a man tells you that he just came out of a relationship, ladies, then you’d better believe he isn’t ready to jump into another one. Let him have his time to grieve, mourn, or celebrate his way out of his situation. Trying to get someone to commit into another relationship when they just came out of one is a disaster waiting to happen. But some women will try to convince that man that they are not like the ex-girlfriend who did him wrong. She will not nag him like his ex, and unlike his last girlfriend, she won’t require a lot of time and attention.

Lies, pure lies, I tell you. Think about the amount of time you needed to get over your last serious ex. If you don’t allow him the time to heal and let go of his ex, she will show up in your relationship with him. Trust me.

If a man only calls you after midnight to come over to his house, well, this is an easy one. I shouldn’t have to go any further and explain. But just in case you don’t understand, Ms. Honey, it’s a booty call. That’s right. He does not see you as a woman he would like to be in a relationship with. He only sees you as a sex partner. If that’s what you are looking for, then knock yourself out. If you are looking for a good man who respects you, move on. This one only thinks of you as a sexual being.

If a man isn’t willing to define the relationship he has with you, then you’re not in a relationship. If every time you bring up the subject, his response is, “You’re cool,” “We’re just hanging out,” or “Why do we have to define this?” this man is clearly not the one for you. He cannot be honest or open enough to express how he feels for you. Why would you sit around waiting on a little boy? Only a small child cannot clearly articulate their feelings. The man for you will not hesitate or clam up when it’s time to share his feelings and emotions. He will certainly be able to express if he is into you, and that you are his one and only lady.

If you’ve been seeing a man for over six months and you’ve never been to his home, haven’t met any of his friends or family members, and you’re still not sure where he works, this is a clear indication that you don’t have a relationship. You know nothing about this man.

Why is he being so discreet? He’s obviously hiding something. Let him go and move on. Why would you want to be with a man who’s not willing to share his personal life with you? It’s not worth it to play detective and explore his background. (And I know some of you will, because you like snooping and being nosy.) If he is not forthright with basic information, just let him and his secrets go. Some things you’re better off not knowing. 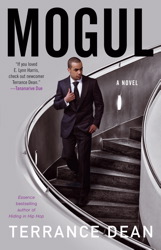 Mogul: A Novel
by Terrance Dean

From the Essence bestselling author of Hiding in Hip Hop and an entertainment insider—a juicy debut novel about the “down-low” life of one of New York’s most beloved Hip Hop producers.

After the sudden death of his father, a renowned jazz musician, Aaron “Big A.T.” Tremble clings to music as an escape. Making hip hop beats becomes his life. His love for music lands him at the estate of Larry “Pop” Singleton, a retired and respected Hip Hop music mogul who sees something special in Big A.T., and he also knows the truth about his sexuality. With Pop’s blessings and nurturing, Big A.T. is on the path to becoming the next great Hip Hop producer in New York.

However, at the pinnacle of his career, compromising photos of Big A.T. land on the desk of a national news program—and in the hands of his girlfriend. Big A.T., for the first time is at a crossroad in his career: come out publicly with his secret or watch his music empire crumble.