Cheating is something that no one wants to have to deal with while in a committed relationship. However, it happens and it’s something you and your significant other need to figure out if you want to resolve. DeVon Franklin, author of THE TRUTH ABOUT MEN, shares his insight on how to fix a relationship after cheating is involved.

Many of the men I counsel and speak with all want to know the same thing: Is healing possible? We’ve all heard friends and family members proclaim that after they were cheated on, they could never trust the other person again. Once a cheater, always a cheater, right? But is that really true? Can there be repair, rehabilitation, and restoration of a marriage after infidelity? Can men who’ve been unrepentant players really change their ways and start treating women not as sex toys but as people?

The answer is, it depends. It depends on the circumstances and what kind of damage has been done. It depends on whether the infidelity was a one-time mistake or a pattern going back years. It depends on how committed the man and woman are to making things work and getting past the crisis, as Jason Weis, a family law attorney at Curran Moher Weis, says.

“Of our adultery cases, probably seventy-five percent are men,” he writes in an email. “It’s a big generalization, but the couples who tend to survive adultery are those who have longer relationships and limited adulterous behavior (e.g., an isolated indiscretion). Successful couples are able to prioritize the larger benefits of their relationship over the benefits of an unblemished record of fidelity. They look past a single sexual act and choose to preserve a relationship that has greater benefits for them emotionally, socially, professionally, financially, etc., and has similar benefits for their children.

“Long-term infidelity, waste of family assets with paramours, dangerous/stupid behaviors with the paramours, and repeated acts of deception or dishonesty are behaviors that tend to ensure that the relationship fails. In such circumstances, the sense of betrayal cuts so deep that it becomes fatal to rational behavior.”

In other words, to save the relationship, both the man and woman have to want to save it. That’s a hard sell when infidelity is a longtime pattern. In such cases, especially if the man has been caught cheating in the past, promised to reform, and then sinned again, the marriage is likely over.

Trust is like an antique vase: slow and difficult to build, distressingly easy to shatter, and nearly impossible to mend. If a man has already cheated and isn’t willing to become accountable to his woman and completely change his ways—and more important, if he doesn’t get control of the lust within—it’s very likely he’ll cheat again. After all, according to Trustify, “People who have cheated before are 350 percent more likely to cheat again.” That brutal number reflects a brutal reality.

For more relationship advice check out THE TRUTH ABOUT MEN by DeVon Franklin!

For more on Tips on Life & Love: Why Giving Up on Dating Finally Prepared Me to Find Love

Excerpted from The Truth About Men by DeVon Franklin. Copyright © 2019 by author. Used by permission of the publisher. All rights reserved. 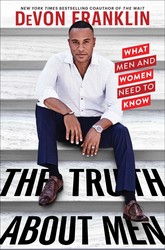 The Truth About Men
by DeVon Franklin

DeVon provides the manual for how men can change, both on a personal and a societal level by providing practical solutions for helping men learn how to resist temptation, how to practice self-control and how to love. He argues the same discipline that drives men in their professional lives needs to be applied to their private lives. DeVon is also transparent about the challenges he faces daily as he endeavors to “Master the Dog” within.

But The Truth About Men isn’t just for men. DeVon tells female readers everything they need to know about men. He offers women a real-time understanding of how men’s struggle effects them, insights that can help them navigate their relationships with men and information on how to heal from the damage that some misbehaving men may have inflicted.

This book is a raw, informative, and compelling look at an issue that threatens to tear our society apart yet it offers a positive way forward for men and women alike.