After my marriage fell apart, my libido was frozen, as though my husband’s rejection had been a stun gun aimed directly at my G spot. After a few years of isolation, I finally began to date and explore and get to know my sexual self in a new, nonjudgmental way. From Women, Food, and Desire.

It was the most liberating period of my life. Being a good mother was my highest priority, so I was able to bypass putting any pressure on myself to find “the one” or to seek out any kind of committed relationship. Instead, I followed my instincts and engaged with men in a consensual, playful, stress-free way. It was an incredibly healthy time in my life, and it was during this phase of dating that I was able to reintegrate into my body, to regain my sense of myself as an attractive and desirable woman, one who was just beginning to learn about her own deep needs and desires.

I recently did the math, and during that two-year period after my divorce, I went on about a hundred first dates. Most of those, of course, were also last dates, but that was how it was supposed to be. It was so helpful to meet a man in a coffee shop and know, after a few minutes of chatting, that we weren’t meant to get to know each other beyond that meeting. I did connect with a few men and I had sexual relationships with some, but I never committed to just one man. At least not until I met Bob, my current partner.

Where had this man come from?

I had never, in all my life, had such a deep, meaningful, and frank conversation with someone about sex. With Bob, I dipped my toe into the world of BDSM, made famous by the wildly bestselling Fifty Shades of Grey books. At first, I was nervous. Stepping into parties where the guests were tying each other up in rope corsets, or acting out predetermined scenes, à la Stanley Kubrick’s Eyes Wide Shut, frightened and excited me. Once I started talking to people, though, I realized that I could feel safe. These were actually sweet, honest people interested in creating fantasies around sex that would allow consenting adults to take their pleasure to the edge, without the risk of falling off the cliff. The people I have encountered in this world tend to be mature and clear about their sexual desires, and I find this to be incredibly hot and fulfilling. It’s a world that’s built around open communication, safety, clear and respected boundaries, and deep trust—all the qualities that are the main ingredients of true intimacy for me. Encounters in these worlds require constant communication between partners and constantly checking in with yourself to ask: What are your desires? Concerns? Boundaries? These are similar questions we need to ask ourselves on a daily basis when we sit down to eat.

I’ve entered a phase in my life where I feel empowered sexually and I’m in a relationship with a man who loves and deeply respects me—plus, he knows his way around a knot or two. I feel incredibly blessed. And I’ve learned that when I feel safe, in my body and in the presence of my trustworthy partner, I can actually relax and surrender to pleasure. Now, with hindsight, I can honestly say that I am grateful for the beautiful, revelatory, transformative experiences that being rejected provided me. I finally feel like I’m becoming the sexually satisfied woman I was always meant to be. 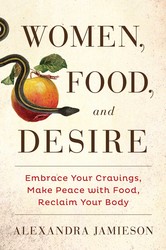 Breaking habits can be all about facing our cravings and Alexandra Jamieson takes on that conflict head-on in Women, Food and Desire

A holistic health counselor and co-star of award-winning documentary Super Size Me, she explores women’s cravings—for food, sleep, sex, movement, companionship, inspiration—and teaches them to listen to their bodies for a healthier, fuller life. Having overcome her own food addictions and the weight and health problems these habits caused, she learned something life-altering: when we listen to our cravings, they will lead us onto the path of deep healing.

"Alexandra Jamieson brilliantly empowers women to face their toxic thoughts and food habits to establish a new relationship with their body and cravings." - Dr. Sara Gottfried, author of The Hormone Cure