Are you done with the dating game? That’s understandable. Many of us spend so much time trying to find Mr. or Mrs. Right that it can feel impossible. Take a moment to breathe. Let go of your anxiety about needing to find someone. Your perfect match might find you when you least expect it. In an excerpt from her new memoir, UNWIFEABLE, Mandy Stadtmiller describes how giving up on relationships finally prepared her to find the right one.

There is a true irony that people who are blogging all about the minutiae of their lives are sometimes the loneliest people of all.

Especially when they have as much baggage as I do.

I am a drug and alcohol addict. I am a food addict. And as much as I hate to admit it, I am a love and sex addict as well.

So while getting hired as an editor and writer for the legendary Jane Pratt at the first-person confessional website xoJane in 2012 was the realization of a childhood dream, the resulting alienation I faced in my personal life felt closer to a nightmare.

xoJane, in case you aren’t familiar, pioneered the art of the “It Happened to Me” essay, whereby writers would enthusiastically spill the most embarrassing and intimate tales of their daily lives. The repercussions of directly tapping into the vein of my personal life to write about traumas or regrets was (and is) a deeply unsettling experience for people who are much more private individuals, which everyone in my family definitely is.

Regularly, there were fights with people close to me who wondered: Why was I airing all of my dirty laundry for the world when I hadn’t even finished examining it myself?

By 2015, I was more burned out than I’d ever been. I rarely left my apartment or dated at all. I sometimes went to therapy or 12-step meetings, but my workaholism was a mask for not actually having any kind of life.

When I did date, I would spend most of these nights counting down until I could come up with a fake reason to leave. One guy spent the whole evening complaining about how difficult it was dealing with those desperate New York women who were so eager to “trap” eligible guys like him.

I’d long given upon the idea of getting married. I was too old—about to turn 40—and the prospects available were too vanilla to even see possibility. I was sick of crushed expectations, and I just couldn’t with the boring guys. I’d much rather be one of those cool spinster New York ladies than feel like I was forced to spend night after night with someone who lacked a sense of humor, or even worse, thought he had one and didn’t.

In order to have the one thing that made me happy—authenticity and connection—I forced myself to begin mulling some very difficult questions.

I had a realization during this time that served as a wake-up call of sorts.

I almost wrote it all up as an xoJane piece, but it felt too precious somehow. I wanted to nurture it and let it flourish inside of me.

One day when I was walking to an AA meeting after a long day at xoJane, as I crossed the street, I began absentmindedly praying to one of the saints I’d always felt most connected to in life: St. Anthony, who is known as the patron saint of lost things. As I prayed, I asked the question silently to myself, again and again: Would I ever find my soul mate?

Because maybe, I thought, my soul mate was just lost. Maybe that’s all it was. Maybe he just got bad directions was all.

By the time I reached Forty-Second Street and walked up the stairs to a run-down theater building in Midtown to make the 8 p.m. meeting, the answer to my question came to me in a flash. I actually stopped walking and laughed out loud.

I was the soul mate I had been looking for all this time. I was the only person who could decide that I was worthy of love—all the time—even when I was falling down on my face yet again or when I was trying my absolute best.

As I thought about the concept, I started exploring and investigating, and the possibilities felt like beams of light and love shooting into the most bruised and battered parts of my soul.

What if I were to truly focus on giving myself all the love and compassion and support I’d longed for from someone else all my life? What if I no longer beat myself up? What if I learned to treasure the idea of taking care of myself and my heart and my boundaries, even when it felt unnatural and uncomfortable? What if I accepted and reconciled the ugliest parts of my history—every guy, every drug, every deception—and stopped terrorizing my heart with impotent regret?

What if I was forgiven and free? What if I always had been?

Maybe all the costumes and disguises and posturing along the way didn’t matter. Because the only self that ever existed could be explained in one single identity.

I was a survivor—and I could and would always be there for myself, no matter what.

After having spent so long chasing some external source of relief in the form of sex and food and drugs and work and men and even shame itself, realizing that I alone could give myself reprieve felt like the most beautiful gift of all.

Soon after, I confided this story to friends. I told my therapist. I even told my family, with whom I’d finally reconnected as I began to develop more boundaries in my writing and sharing. But I also became more open than I had ever been. Because I was open to the prospect of meeting someone who would support and love me the rest of the journey.

Condensed, edited and excerpted from Unwifeable, which is now available from retailers everywhere.

Once you find yourself, it’s important to open yourself to love. These tips will help. 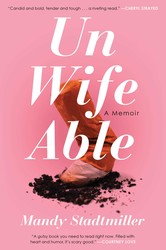 From the popular, “candid and bold, tender and tough” (Cheryl Strayed) dating columnist for New York magazine and the New York Post comes a whirlwind and “gutsy” (Courtney Love) memoir recounting countless failed romances and blackout nights, told with Mandy Stadtmiller’s unflinching candor and brilliant wit. My story is not unique. Single girl comes to New York; New York eats her alive. But what does stand out is my discovery that you can essentially live a life that appears to be a textbook manual for everything one can do wrong to find love—and still find Mr. Right. Mandy Stadtmiller came to Manhattan in 2005, newly divorced, thirty years old, with a job at the New York Post, ready to conquer the city and the industry in one fell swoop.